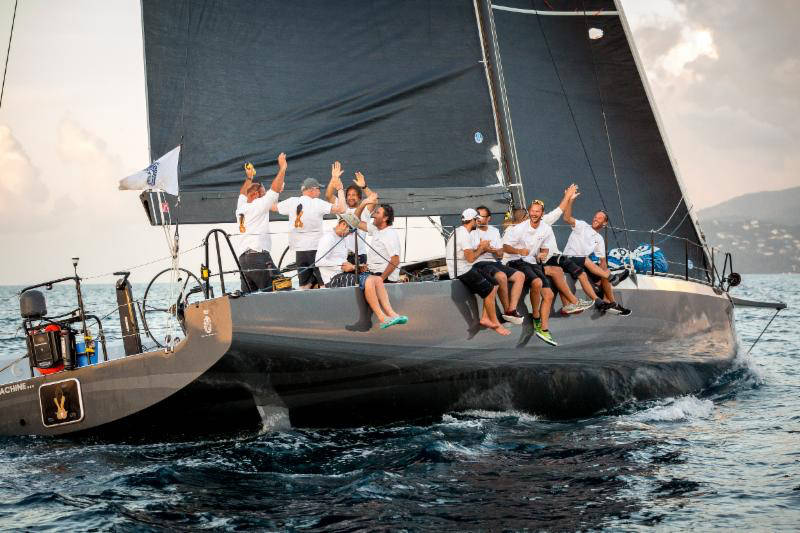 An unusually light southerly airstream greeted the competitors for the start, but the super-light conditions didn’t last for long. A low pressure system to the north and a ridge of high pressure to the south blocked the way to the tradewinds and routed the fleet to the north of the rhumb line. After beating into rough seas for most of the second day, CQS was the first to make the dive south. After passing to the north of Tenerife trying to find a narrow gap through the high pressure ridge, CQS made short work of the transition zone to reach the tradewinds.

Jens Kellinghusen’s German Ker 56 Varuna chose to continue north; a fast, rough ride with the attraction to hook into the low pressure system and slingshot south towards Grenada. “There’s buckets of water cascading down the deck with over 20 knots of boat speed power reaching. It is a pretty bumpy ride,” commented Varuna’s navigator Mike Broughton. A few hours later, Varuna’s race came to a grinding halt after the crew detected structural problems and after effecting temporary repairs, she turned back to Marina Lanzarote and retired from the race.

By the fifth day, different strategies to tackle the complex weather scenario caused a huge spread in the fleet with boats 800 miles across the Atlantic Ocean. CQS was the furthest south and fully into the tradewinds, enjoying the downwind sleigh ride towards Grenada, whilst the most northerly boats were the Volvo 70, Roman Guerra’s Monster Project and Johann von Eicken and Pit Brockhausen’s German Swan 56 Latona.

By the seventh day, CQS was approaching the halfway mark of the RORC Transatlantic Race, blast reaching in perfect tradewind conditions. The powerful Maxi had opened up a lead of 130 miles on her nearest rivals. Jochen Bovenkamp’s Marten 72 Aragon chose to continue west, whilst Canadian Southern Wind 96 Sorceress skippered by Daniel Stump and Teasing Machine chose to move south.

CQS had been hitting well over 20 knots of boat speed, surfing down Atlantic rollers, keeping the pace on towards the finish, but on Day 10 CQS suffered a knock down in a 40 knot squall in pitch darkness. “There has been damage to sails and onboard electronic systems,” explained CQS skipper Ludde Ingvall over the satphone. “As we went into a gybe the engine (which cants the keel) stalled and we lay flat on our side for a while which resulted in a diesel spill inside the boat, so the smell is terrible in the heat! We broke the top three battens in the mainsail, but we are still sailing towards the finish at reasonable speed in pouring rain. We will assess the situation at first light.”

The second boat to finish was Jochen Bovenkamp’s Marten 72 Aragon, crossing the finish line in an elapsed time of 12 days 19 hrs 49 mins 37 secs. The powerful Maxi showed a tremendous turn of speed in the last 24 hours to power ahead of their close rival Sorceress. Aragon was the runner-up for the race overall under IRC and Sorceress was awarded the ORC Superyacht Division.

On the 13th day of the race, Eric de Turckheim’s French Nivelt-Muratet 54 Teasing Machine finished the race in an elapsed time of 13 days 09 hrs 29 mins 08 secs. Whilst a number of the fleet were still racing, none of them could better Teasing Machine’s corrected time under IRC. Teasing Machine’s Eric de Turckheim was awarded the RORC Transatlantic Race Trophy – the smallest yacht to win the prestigious antique silver cup, which had only previously been won by Maxis.

“To win the RORC Transatlantic Race is just fantastic,” commented Eric de Turckheim. “It is not just a personal achievement to win my first ever transatlantic race, because it has been such a massive team effort. Teasing Machine was only taking part in her second offshore race, and to build a team to that performance level within four months has required a huge commitment from everyone, but especially Laurent Pages.”

Mathias Mueller von Blumencron’s Class40 Red completed the race in an elapsed time of 15 days 17 hours 25 mins 25 secs to take a hard-earned victory from Berthold and Tobias Brinkmann’s MarieJo, which was just under nine hours behind. The Class40 lead had changed hands at least three times during the race, but it was Red, with a young but very experienced crew that had raced thousands of miles together, that took the Class win.

On the 17th day of the RORC Transatlantic Race five teams completed the 3,000 mile race within a 10 hour period. Bank von Bremen was the first German boat to finish the race in an elapsed time of 15 days 21 hours 29 mins 57 secs.

“We are delighted to have beaten the Hamburg boats to Grenada,” smiled Alexander Beilken, skipper of German J/V53 Bank von Bremen. “This boat has sailed over 160,000 miles and we feel very privileged to write another chapter in her history.”

German JV52 Haspa Hamburg was next to finish with a crew nearly all in their 20s. For the last part of the race Haspa Hamburg was locked into a personal duel with Gerald Bibot’s Belgian catamaran Zed 6. “We destroyed both of our spinnakers and Haspa Hamburg came from 100 miles behind to beat us to the line by just over 10 minutes,” explained Zed 6 skipper Gerald Bibot, “But, we were happy for them, not sad for us. It is fantastic to see young talented sailors making their way in our sport.”

By the 18th day, the podium for IRC One was complete with three more German teams taking the glory; all skippered and crewed by fathers and sons. There were emotional scenes as the teams arrived at Camper & Nicholsons Port Louis Marina. Andrews 56 Broader View Hamburg, owned by Hamburgische Verein Seefahrt and skippered by Bjoern Woge, won IRC One. Friedrich Boehnert’s Xp-50 Lunatix, racing with son Arno was second, German Swan 56 Latona sailed by three generations of the von Eicken family was third.

“The whole crew is fantastic and they have all performed really well,” commented Broader View Hamburg Skipper Bjoern Woge who was racing with his 18-year old son. “We did not expect to win our class and the lead was changing so much, so to win is great and a real surprise. Crossing the finishing line with my son will stay with me forever.”

Richard Palmer’s British JPK 10.10 Jangada, racing two handed with Rupert Holmes crossed the finish line on the 21st day of the race, winning IRC Two and IRC Two Handed. Camper & Nicholsons Port Louis Marina gave the triumphant duo a warm welcome, as is customary for every arrival in the RORC Transatlantic Race. “The race took significantly longer than we thought, but our preparation and anticipation for the race saw us through without any big issues. Arriving in Grenada to such a great welcome was fantastic, but we only managed to drink half the beer before drifting into a long sleep,” explained Palmer.

Lyssandra Barbieri’s Dufour 40 Hatha Maris was the last boat to finish the RORC Transatlantic Race in an elapsed time of 26 days 7 hours 51 mins 50 secs. The record entry of 23 yachts for the 2017 RORC Transatlantic Race was now all accounted for. As with every team in the race, regardless of time of day or night, Hatha Maris was greeted with a warm welcome and well-deserved cold beers as they arrived dockside at Camper & Nicholsons Port Louis Marina. Hatha Maris was the first all-women crew to complete the race: “Fantastic, exhausted and elated,” smiled Lyssandra, having completed the 3,000 nautical mile race. “We did not want one more night watch; we were done. Everybody from the marina is here to greet us, there is beer, there is food, we are very lucky people. Tonight everybody wants to eat a rare steak and a lot of salad and rum with coconut water.”

The 2017 RORC Transatlantic Race is the first leg of The Atlantic Anniversary Regatta (AAR), celebrating the 150th Anniversary of the prestigious Hamburg-based yacht club, Norddeutscher Regatta Verein (NRV). It is the first regatta series to cross the Atlantic Ocean in both directions. The second leg of the AAR from Bermuda to Hamburg will start on 8th July 2018. The next (5th) edition of the RORC Transatlantic Race will start on the 24th November 2018.