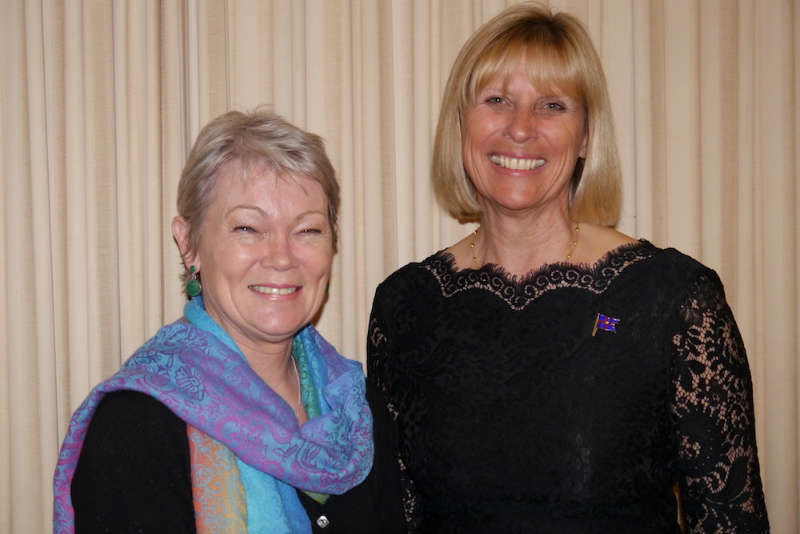 Yachtswoman Tracy Edwards MBE, received two enthusiastic standing ovations from an audience of 150 Club members, at our 2018 Fitting Out Supper. The round the world sailor was guest speaker at the start of season event, she enthralled those present with a vivid account of her early life and the remarkable chain of events that saw her skipper the first ever all-female crew on the yacht Maiden, in the 1989-90 Whitbread Round the World Race.

Tracy brought her audience up to date with an account of the recovery of a near-derelict Maiden from the Seychelles last year, the 58-foot yacht’s extensive and on-going restoration at HYS and plans for a world tour to promote better access to education for girls.

She also highlighted that The Maiden Factor charity project is being supported by Princess Haya Bint Al Hussein, daughter of the late King Hussein of Jordan, who was the original backer of Maiden on her ground-breaking Whitbread participation.

Earlier in the evening, Commodore Karen Henderson-Williams, presented the Frank Heenan Award to Jeremy Waitt, in recognition of his seamanship during the challenging RORC Caribbean 600 race in February. Jeremy was racing two-handed aboard the JPK 10.10 Jangada and was well-placed in the fleet until an injury to co-skipper and former Club member Richard Palmer, forced their retirement.

The Frank Heenan Award is presented annually to a Club member who has distinguished themselves in either solo or short-handed sailing. Last year it was awarded to Honorary Member and Paralympic champion, Helena Lucas MBE. Previous winners include Geoff Holt and Nicky Curwen.

Also presented on the night, was The Cruiser Log Award, which went to Graham Rabbitts in recognition of his travels aboard his Hardy 36 Commodore motorboat Teal with his wife Dairne and for the log ‘Teal’s Trip 2017’.

The Commodore finished the evening by thanking Tracy for her inspirational talk and echoed Tracy’s words about equality within the sport. She praised the club members currently participating in the Volvo Ocean Race – Libby Greenhalgh, Dee Caffari, Hannah Diamond and Robert Greenhalgh. She also compared the difficult sailing conditions they have encountered to the gruelling sailing conditions Tracy faced in the 1989 Whitbread Round the World Race.