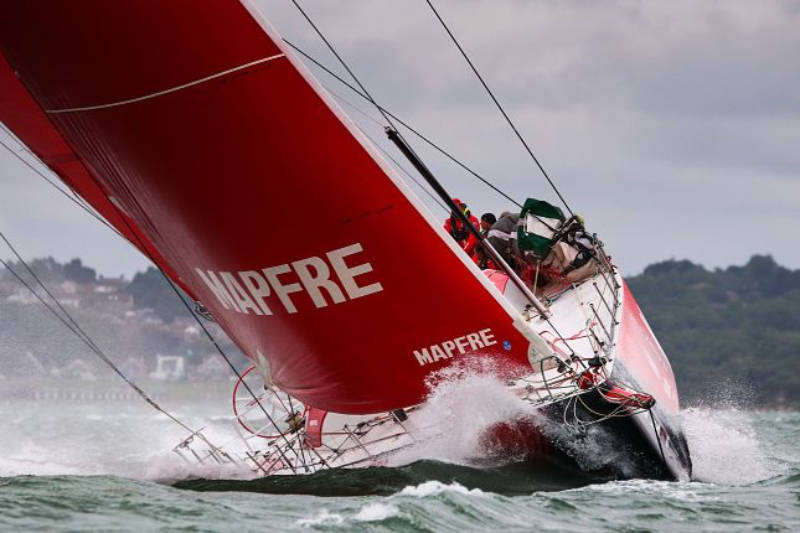 The Spanish Volvo Ocean 65 Mapfre completed the 50 mile course around the Isle of Wight in 3 hours, 13 minutes and 11 seconds, setting a new outright Around Isle of Wight world record by a monohull yacht.

Her time was 6 minutes 58 seconds ahead of that set by Mike Slades 100ft ICAP Leopard in 2013. Unlike the Volvo Ocean 65s, ICAP Leopard has powered winches. Mapfre therefore also beat the previous world record for a monohull without power assistance by an impressive margin of more than 36 minutes.

Propelled by winds gusting to 40 knots on the south side of the Isle of Wight, the next four boats in the race  Team Brunel, Team Akzonobel and Dongfeng Race Team  also beat the previous record times.

We had a good start, were able to control the fleet a bit, and then we were always in the lead, said Mapfre skipper Xabi Fernandez. It was a very close race with the other boats, there were some very fast moments, and it was great fun.

We were delighted with this first opportunity for the fleet to compete together and show their speed at Lendy Cowes Weeks Sevenstar Triple Crown. added VOR race director Phil Lawrence.

It was fantastic to see such a long-standing record being broken, says Wouter Verbraak, head of Racing Yacht Logistics at Sevenstar Yacht Transport. Were now looking forward to seeing other record breaking yachts and their crews raising the bar still further at the next Sevenstar Triple Crown.