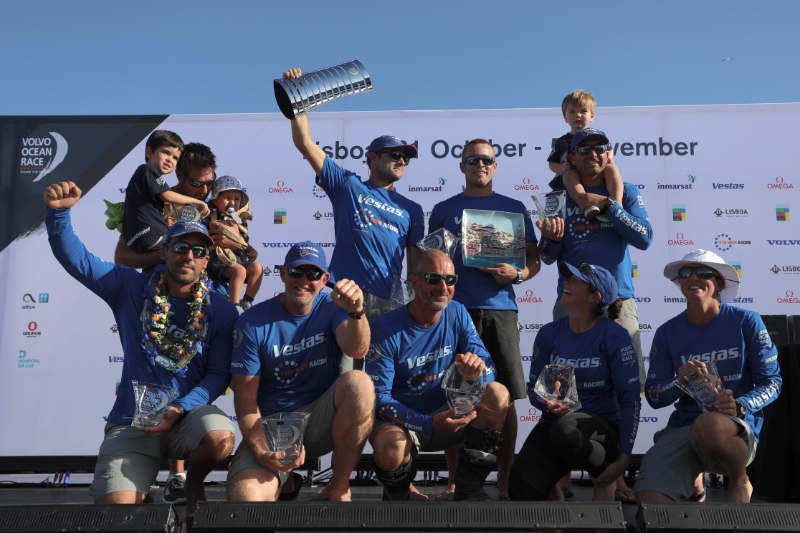 Vestas 11th Hour Racing crossed the finish line in Lisbon at 1408 UTC ahead of their competitors by a few hours earning 8 points and are now the leaders of the Volvo Ocean Race. They led the 7-day race since the first night staying ahead of the other seven boats through the Strait of Gibraltar, around the island of Porto Santo, and north to Lisbon via a virtual waypoint added by the Race Committee mid-leg.

“Can’t argue with the results,” said skipper, Charlie Enright upon finishing in Lisbon. “For us, it has always been the process and improving every day. We prioritized getting the right people and this provides us with a lot of confidence. I can’t say enough about the squad on the boat and the ones on the shore.”

“To kick it off this way is a strong sentiment to the team,” added Team Director and Co-Founder, Mark Towill. “We have a long way to go for sure, and this is a great way to start the event.”

This is technically back-to-back ocean leg wins for the American duo, Enright and Towill. The pair along with their fellow US sailor, Nick Dana, won the final leg of the last edition onboard Team Alvimedica. This is the first leg win for Vestas, and for a Danish flagged boat in the history of the Volvo Ocean Race.

The team is now in Lisbon for one week participating in outreach events with the local community, an In-Port Race, Pro-Am racing, and preparing for the 7000-mile leg to Cape Town, South Africa that starts on November 6th.

The Race to Win
Vestas 11th Hour Racing led for the majority of the 1650 nm course that took the seven teams from Alicante, Spain to Lisbon, Portugal.

“We had a good leg. And that’s due to the strong shore team preparation with Chris Bedford, our meteorologist, Anderson Reggio for navigation support, and Vestas’ meteorology team. We had a plan and could be proactive instead of reactive,” said Simon Fisher (SiFi), winner of the last Volvo Ocean Race as navigator.

The first night the crew took a risk by sailing close to the shoreline of southern Spain hoping for wind coming off the mountains not seen on weather forecasts. The gamble paid off as they were the first in and out of the Strait of Gibraltar, an area known for high winds, shipping traffic, and a narrow path for maneuvers.

According to SiFi, “we then got fired out of Gibraltar at 30 knots. We saw as high as 35 knots and we gybed back and forth quite a few times to stay in the pressure which is definitely exhausting for the team.”

By Day 2, the sailors extended their lead 25 miles from the second place boat, but it was short-lived as it shrank to 6 miles in just a few hours, as they were the first to sail into a lighter pressure system.

“We had good scheds and bad scheds,” said Charlie Enright, referring the position reports delivered to the team every six hours. “It’s frustrating to see the others take a bite out of your lead.”

The vexations started to wane as the crew rounded the island of Porto Santo still in the lead, and a downwind drag race ensued north to a virtual mark 250nm away. The race committee added the mark after Day 2 to extend the course to align with the intention of a 7-day leg.

After turning the virtual mark, the team continued to extend attributing their speed to the sail choice and crew work. While all the teams have the same sails onboard, it is up to the individual crews to decide which of the seven headsails are the optimal combination for varying conditions.

“We are fortunate enough to have a well-rounded crew who can jump into any position on the boat, whether that is driving, grinding, or trimming,” said Team Director, Mark Towill. “That allows everyone to stay fresh and execute our navigation plan.”

“We are not talking about the finish onboard yet,” said young Australian sailor, Tom Johnson just 24 hours before the finish. “No one is taking a back seat, we are just all doing our job.”

The last 24 hours were tough as the crew faced shifting light winds, a traffic separation scheme that limited their navigation, and 4 miles of upwind sailing in a narrow river to the finish, but in the end the crew recognizes this is only beginning of a longer race that will take them around the world over the next 9 months.

Life Onboard
The first leg of the race was an exhausting all-out sprint for the team. Executing multiple maneuvers in the initial 36 hours means there little sleep for the crew. Then in the light air, the monotony of waiting for wind is a mental game the teams must push through to be ready for the next situation.

When not keeping the boat going fast, preparing food, washing dishes, and maintenance are tasks the sailors share onboard. Fresh food only lasts for the first few days; then they switch to freeze-dried meals. The crew partook in Meatless Monday, an international campaign to reduce the impact the meat industry has on the environment on the first day out at sea. “We are enjoying Mediterranean veggie pasta,” said Mark Towill, “it is one simple way of lowering our carbon footprint and is part of our commitment to sustainability.”

The boat also had to overcome a few systems failures onboard during the leg. A broken water pump the first day left the crew without fresh water until boat captain, Nick Dana, was able to fix the issue.  He explains, “it’s not like we can go out and get a new one, everything must be fixed onboard, but that’s the Volvo Ocean Race.” Repair and reuse is another key element of sustainable living.

Then on the evening of Day 4, skipper Charlie Enright, felt the performance of the boat “just wasn’t right” so he went below only to discover a disconnected water ballast hose filled the yacht with 800 liters of water.  The crew bailed the water and repaired the hose, luckily, not losing too much speed in the process.

It’s not all work onboard a Volvo Ocean 65. On the morning of Day 6, race rookie and British sailor, Hannah Diamond took a moment to soak it all in: “It’s been a really nice sunrise and had a couple of pods of dolphins come past, so couldn’t ask for more really.”

Web:  Follow the Volvo Ocean Race Live Blog and tracker: www.volvooceanrace.com
Stay tuned to our website www.Vestas11thHourRacing.com for Team News and Blogs from the Boat.

Download the app — The Volvo Ocean Race App has all the latest content from the teams and the race. Head over to the iTunes App Store or Google Play for more information.