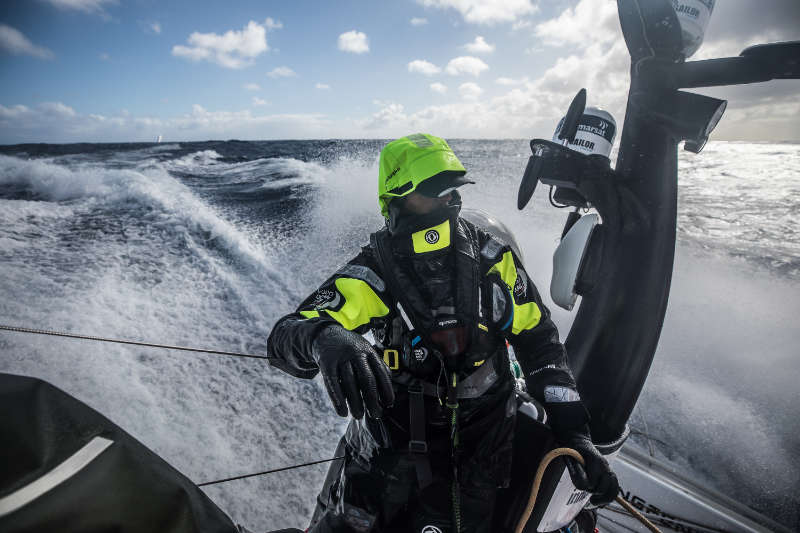 After winds had moderated over much of the weekend, and provide a much-needed respite to the Volvo Ocean Race sailors, Monday showed the Southern Ocean still has some bite.

With 1,400 miles to sail to Cape Horn, the fleet is now seeing snow squalls and winds above 40 knots, in building seas.

This will be the case for another 24 hours, before another short break brings more moderate winds. But as the boats approach the famed Cape Horn, the forecast is for conditions to deteriorate significantly, with howling winds and towering seas predicted.

Team Brunel continues to lead the fleet in their push eastwards, with race veterans like skipper Bouwe Bekking and navigator Andrew Cape shepherding the rookies on their team through the travails of the Southern Ocean.

“The young dogs help to make the boat go fast, but they have never been bitten badly in the butt and we don’t want them to experience that,” Bekking wrote. “Down here things can quickly snowball in the wrong direction. In a blink, 30 knots can turn into 40-plus and then it is crash and burn…

“(But) we’ve been going very nicely for the last couple of days,” Bekking said. “There is a big front coming from behind and the Ice Exclusion Zone is setting us up for a gybe. Then a big shift and quite a bit of breeze tonight and tomorrow.”

Vestas 11th Hour Racing navigator Simon Fisher was even more succinct in a tweet: “Windy. Very Windy. Making our way East while getting hunted down by a cold front. A few more hard hours ahead.”

Fisher’s Vestas 11th Hour Racing is in a group of five boats 50 miles behind Brunel, all within 10 miles of each other on distance to finish, and spread 30 miles from north to south.

Remarkably, the overall race leader, MAPFRE, has managed to hang with this group, despite damage to their mast track that limits their mainsail configuration to a single or double-reef.

“I think we have to be very happy with where we are,” said skipper Xabi Fernández. “Yesterday we’ve tried to stop the boat a little bit to make some reinforcements that allow us to keep pushing hard with one or two reefs all the way to the Horn…

“We are now waiting for a lot of wind. We’ll have to be very careful with the mast and hopefully we can match the speed of the other boats and be in the game at the Horn.”

At the back of the fleet SHK-Scallywag is sailing conservatively following some equipment damage as well as at least one uncontrolled gybe.

Skipper David Witt says the goal is to get to Cape Horn safely and then make an effort to catch the fleet. Given the forecast of compression after the Horn, that might be a sensible strategy.

‘’Make sure we get to the Horn intact and we may have a chance,” he told his on-board reporter. “We may not, but we need to get from here to the Horn and at the moment we’re struggling so we just have to get there safely.”