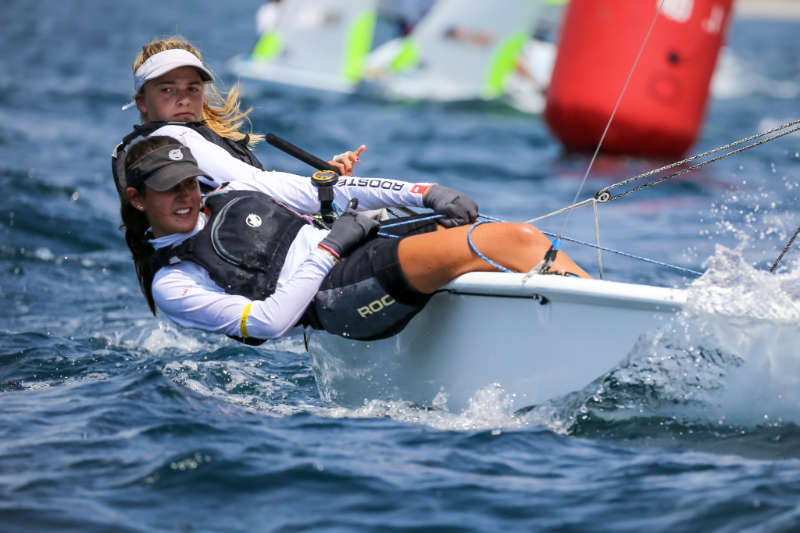 The 12th RS Feva World Championships kick off with a bang! – Champagne sailing

The 12th RS Feva World Championships kick off with a bang! – Champagne sailing

The 2019 RS Feva World Championships have kicked off with a bang in the beautiful town of Follonica. The 200 boats will race in a qualification series for two days before splitting into gold, silver and bronze fleet for the final series. This is the biggest EVER RS double-handed event with 23 different nations!

The event officially opened with a marching band and a huge procession through the town of Follonica. The Mayor of Follonica welcomed the 400 sailors and their families from a stage on the sea front as the chants of “ITALIA” and “HOLLAND OI OI OI” echoed across the beach. GBR sailors Kate Newman and Amile Curtis told us that “The opening ceremony last night was amazing; it was great to see all the countries there all with tons of enthusiasm!”

As the sailors headed down to the golden sand beach to prepare their boats for the first day of racing, the sea breeze started to fill in. Current UK National Champions, Joey Taylor and Terry Hacker, started hot out of the blocks in the blue fleet, leading the first race. The Dutch and British sailors were battling away, filling the top 10 places in the first race of the day in the blue fleet. The red fleet was led by Simon Cooke, 470 champion and crew, Oskar Masfen from New Zealand in the first race, followed by the French.

The conditions changed for the final race of the day as the breeze built, shifted right and the chop got steeper. Dutch coach, Coen de Vries explained “It was champagne conditions! The racecourse was laid really well, and the start line was the right length. The race committee got the races started very quickly which was good because it was so hot! A good first day!”

Millie Irish and Tasmyn Green had an incredible two races with a double bullet before being a little too keen to head in for the day, starting too early and scoring an OCS in the final race of the day. Local Italian sailors, Leonardo Gentilli and Giulio Cusimano took one race to warm up before posting two solid results later in the day. The teams from New Zealand stole the show on the final race of the day, all winning their respective flight races, awesome! After one more race the sailors will be awarded one discard which will really shake up the results! Click here to see the provisional results after day 1. Digital Sailing are here taking incredible pictures from the racing, click here for the images.

What an incredible first day to what will continue to be another amazing Feva world championships. It is all to play for on day two of the qualification series. Stay tuned to see who rises to the top!