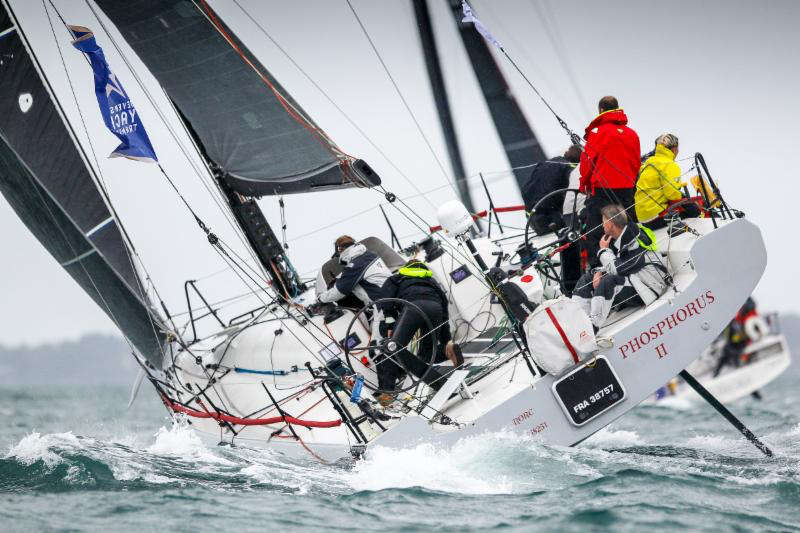 Tenacious start to Sevenstar Round Britain and Ireland Race

Tenacious start to Sevenstar Round Britain and Ireland Race

The international fleet are licking their wounds after a tough first night in the Sevenstar Round Britain and Ireland Race. The leading Class40s and IRC rated yachts have broken away from the rest of the fleet and are expected to round the Scilly Isles this afternoon. With 20 knots from the southwest forecast for the Celtic Sea it will be a long hard slog to Mizen Head on the southwest tip of Ireland. In the 11-strong Class40 fleet, Nicolas Troussel’s Corum and Phil Sharp’s Imerys are side by side, battling for the lead. In the IRC fleet, Giles Redpath’s Pata Negra and Mark Emerson’s A13 Phosphorus II are virtually tied for the lead on the water.

Giles Redpath’s Lombard 46 Pata Negra reported breaking the bobstay connecting the end of the bowsprit to the hull. Chris Hanson, on board Pata Negra, wrote on the first night: “Got a temporary fix for it, though it does mean clipping the Code Zero on at the end of the pole. Now cooking chilli con carne to stack up on food before the winds ahead. Just around Portland Bill and hoping it shuts the door slightly to those behind. Phosphorus is on our quarter; wonder if we will see them all the way around!”

In IRC Two-Handed, Benjamin Schwartz and Chen Jin Hao racing Figaro El Velosolex SL Energies Group lead the class on the water and after time correction. The smallest yacht in the race made the defining move on the first day at Portland Bill. The French/Chinese team tucked right in at the notorious headland as the tide turned against them. The team slingshot around the notorious headland to get a jump on the fleet.

Several competing yachts have reported sustaining damage, so far two starting yacht have retired from the race: Andy Theobald’s J/122 R&W. The yacht and crew are all safely ashore. “We had floating floor boards due to a major leak from the pole that’s seen us retire,” commented R&W crew Howard Hutchinson. “A very sad decision, but the right call. Good luck to you all, see you in four years. We’ll be watching your progress.”

Hannah Stoddel’s Region Normandie broke a halyard right at the start, but crew member Quentin Bes-Green climbed the rig to fix the issue: “We didn’t get the best start in the world,” commented Hannah. “We will complete this race and this has made us very, very aware of how important it is to keep the boat together.”

Having made a great start, Miranda Merron and Halvard Mabire’s Class40 Campagne de France broke their mainsail halyard after leaving the Solent. The team suspended racing to fix the problem and returned to the race course, however, having assessed the situation, Campagne de France has retired this morning; all of the crew are well.

How to follow the race: Track the fleet, catch up with all the daily news from the fleet and race reports, follow on social media, play the Virtual Regatta game or re-play the live streaming from the start: http://roundbritainandireland.rorc.org/