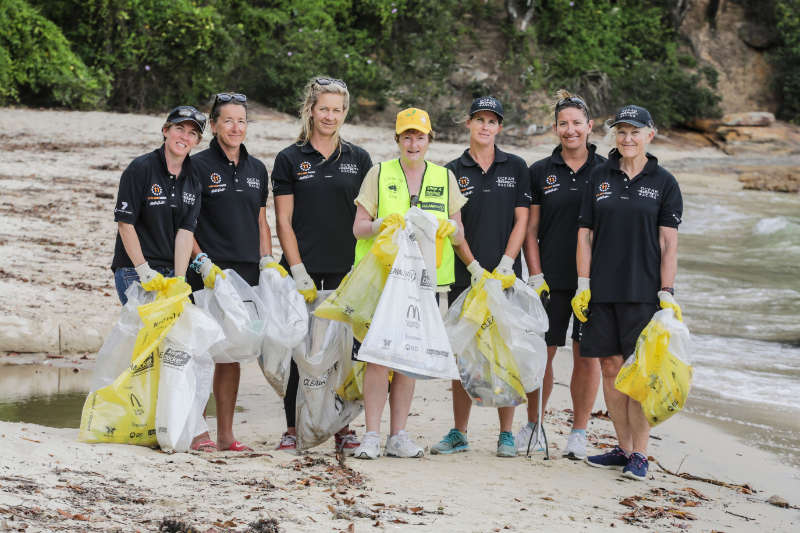 While preparing for the Rolex Sydney Hobart Yacht Race, the all-female professional sailing team, Ocean Respect Racing, joined forces with Clean Up Australia, the iconic, not-for-profit Australian environmental organization, to raise awareness for how rubbish finds its way into the ocean, and encourage positive behavior change. On Tuesday, team members gathered on Whiting Beach in Sydney Harbor to get a better understanding of the rubbish that lurks beneath a seemingly clean harbor. The team removed 12 bags of trash, filled with soft plastic wrappers from food, cigarette butts, plastic water bottles, and many tiny plastic pieces that were unidentifiable. As part of its commitment to leave a lasting legacy in Australia, 11th Hour Racing awarded a $10,000 grant to Clean Up Australia to support the organization’s mission and expand its waterway cleanups.

“I had an eye-opening moment off the coast of Brazil during the Volvo Ocean Race, when we sailed past a fleet of oil rigs that was letting off so much heat and gas, it created its own weather system. Knowing that’s the start of how plastic is produced, I realized spreading this message wasn’t going to end for me when the race did,” said Stacey Jackson, Skipper of Ocean Respect Racing. “Being on the beach with Clean Up Australia, and removing marine debris was a strong reminder of why I formed this team. That’s why I am thrilled to support Clean Up Australia and work together to encourage Australians to ‘turn off the tap’ on plastic pollution.”

In collaboration with the Cruising Yacht Club of Australia – the organizers of the Rolex Sydney Hobart Yacht Race – Clean Up Australia also will ensure that all 92 yachts entered in the race are able to recycle their waste, by including a dedicated recycling bag in all competitors’ packs. The bags will be collected on arrival in Hobart, where waste will be disposed of and recycled properly.

“At 11th Hour Racing, we use the power of sport to drive collaborative and systemic change for the health of our ocean,” said Todd McGuire, Program Director, 11th Hour Racing. “We are thrilled to facilitate this partnership between Ocean Respect Racing and Clean Up Australia, with the goal of educating and motivating individuals and groups to take action for the environment. Often a simple solution, such as  providing the race boats with recycling bags so they can separate their waste easily when they arrive in Hobart, can open up a dialogue that leads to more change in the future.”

Ahead of the race start on Boxing Day, when hundreds of thousands of spectators are onshore and on the water, Clean Up Australia will publish a call to action to reduce waste and dispose of it responsibly. By saying “No,” to single-use plastic, the Ocean Respect Racing team aims to inspire and empower sports fans and drive lasting, behavioral change.

“Our volunteers have found that nearly 75 percent of the rubbish they remove from Australian waterways is single-use plastic, everything from bottles to straws, plastic bags to polystyrene packaging,” said Terrie-Ann Johnson, Managing Director and CEO of Clean Up Australia. “The problem is not confined to items that are floating, what lurks beneath is equally dangerous. We all need to understand that ‘change starts with you.’ Every one of us can make a difference in the amount of plastics that end up as rubbish by simply refusing to take that single-use item.”

Clean Up Australia was founded in 1989 after Ian Kiernan AO competed in the BOC Challenge solo around-the-world yacht race. While racing, he was shocked and disgusted by the pollution and rubbish that he continually encountered. When he returned home, he had the simple idea to make a difference in his backyard – Sydney Harbor. This simple idea has now become the nation’s largest community-based environmental event, Clean Up Australia Day.