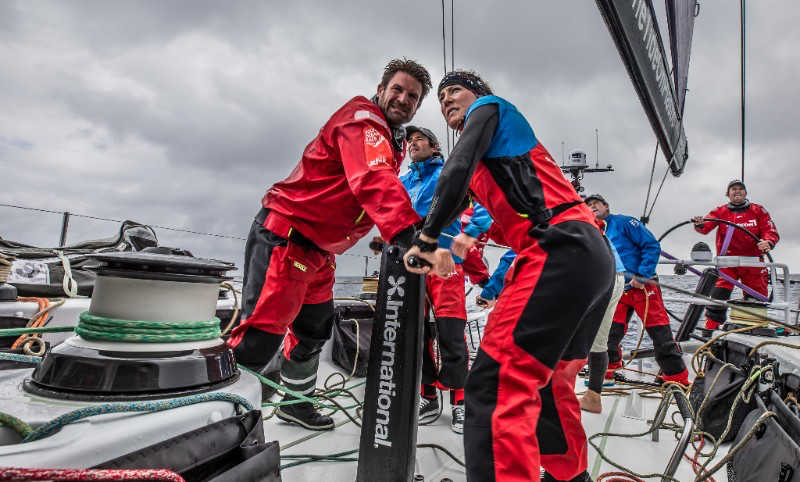 Team AkzoNobel, the Dutch campaign for the 2017-18 Volvo Ocean Race around the world, has finished second in the final stage of Leg Zero.

The fourth heat of the qualifying series was to end in Lisbon, but prolonged light wind conditions in the Bay of Biscay left the seven-boat fleet drifting and forced race organisers to shorten the course close to the Spanish city of Vigo in the north of the country.

Fleet standings for the leg were calculated on each of the seven boats’ relative distance to the original finish line on Lisbon’s River Tagus and placed team AkzoNobel – skippered by Dutch yachtsman Simeon Tienpont – in second behind joint American and Danish entry Vestas 11th Hour Racing. Third was the overall Leg Zero winner, Mapfre from Spain.

Team AkzoNobel finished fourth overall in the Leg Zero Volvo Ocean Race qualifying series which does not count towards the main race.

Leg Zero saw the crew finish third in a three-hour sprint race around the Isle of Wight in England, fourth in the 605-nautical mile (1,117-kilometer) offshore classic Rolex Fastnet Race, fifth in a 225 nm (417 km) English Channel dash from Plymouth in England to St. Malo in France, and second in the final shortened race from St. Malo to Lisbon, Portugal.

Team AkzoNobel skipper Simeon Tienpont said the crew had made huge leaps forward during the practice racing in their preparation for the actual race which starts from Alicante, Spain in less than 10 weeks.

“You cannot have better practice than racing and we learned a lot,” he said. “We had some disappointing setbacks at times where we couldn’t find the right mode, but I think our learning curve has been unbelievably steep and we are all very happy that we have kept it so.

“We knew already how close the action is, but we definitely learned how important it is to have the routine on board right and keep everyone focused all the time. There is still a huge amount to do but we are feeling happy about the progress we have made.”

After two months of intense action that has seen the team launch, commission and christen their brand new Volvo Ocean 65 yacht – as well as racing it for the first time – the sailors will now take a well-earned break.

In the meantime, the technical shore crew will crane the boat out of the water in Lisbon and carry out a full overhaul and maintenance check before on-the-water training recommences in early September.

The first leg of the Volvo Ocean Race is from Alicante to Lisbon starting on October 22.