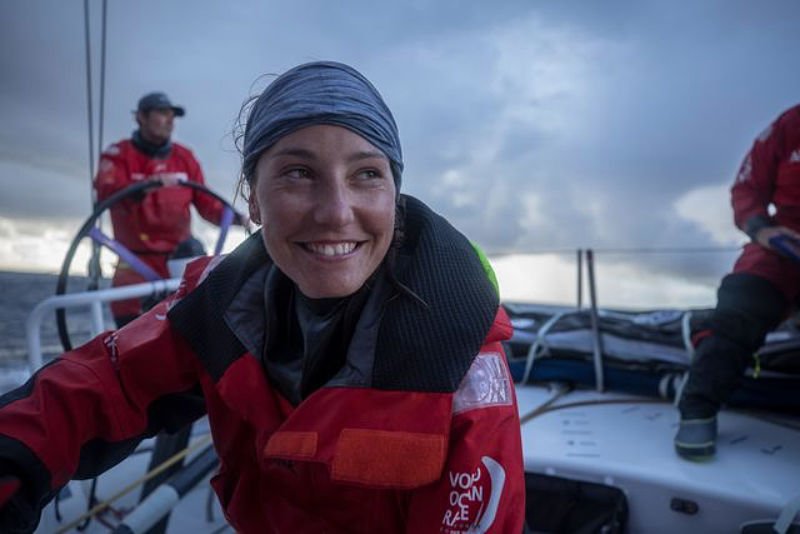 Team AkzoNobel – the Dutch professional sailing team competing in the 2017-18 Volvo Ocean Race – has announced Bermudian sailor Emily Nagel as the latest member of its international crew. Aged 23, Nagel is the eleventh sailor to be confirmed and will be taking part in her first around-the-world race.

Nagel – the youngest female sailor in this edition of the race – described becoming part of the team as “a childhood dream come true”. She cites British solo skipper Dame Ellen MacArthur as the inspiration behind her long-held desire to race around the world.

“Not long after I started sailing, one Christmas I was given a book about MacArthur and her first time sailing around the world,” she said. “From that moment I was hooked and when I first heard about the Volvo Ocean Race I knew that was what I one day wanted to do.”

Team AkzoNobel skipper – renowned Dutch yachtsman Simeon Tienpont – recognized Nagel as a strong candidate for his team from the moment he met her.

“We were looking for a strong powerful woman with a lot of technical capabilities and someone who could really fit in well within the existing group,” Tienpont said. “Emily was a great fit for that.

Nagel was born in Bermuda and has permanent residence there but went to school and university in the UK and holds a British passport. She was introduced to sailing at the age of ten in Bermuda by a family friend who loaned her his daughter’s Optimist dinghy.

Well and truly bitten by the sailing bug, she soon persuaded her parents to sign her up for lessons and went on to race Optimists until she turned 13, when she switched to the RS Fever class at boarding school in England. Soon selected for the British national squad, she went on to compete at European and world championship level.

As well as a stint as commodore of the University sailing club, she was also the British University Sailing Association (BUSA) ladies captain for two years. In 2015 she led an otherwise all-male BUSA team on a victorious team racing tour of the US.

Meanwhile, her ongoing obsession with sailboat racing caused her to switch the focus of her engineering degree towards naval architecture, specializing in high performance racing boats. After completing her degree, Nagel returned to Bermuda where she earned selection for the local Team BDA crew at the 2017 Youth America’s Cup.

Alongside her Team BDA training duties she also worked as an intern in the design department at the SoftBank Team Japan America’s Cup syndicate – a role that shortly before the America’s Cup began morphed into a full-time position, forcing her to reluctantly withdraw from Team BDA.

Nagel’s selection as a member of team AkzoNobel for the Volvo Ocean Race comes after two months of trialing with the team, during which she sailed several thousand offshore training miles and took part in all four legs of the Volvo Ocean Race’s “Leg Zero” qualifier series – including the classic Rolex Fastnet Race.

“I didn’t think it would happen so quickly, but when I got this chance I grabbed it with both hands,” commented Nagel. “It’s been daunting, trialing with a team like this one, with so many of my heroes in it and so nerve-wracking to be always thinking that one major mess up could lose me my place.

“Now I’m unbelievably proud and excited to be full-time with the team and I can’t wait for the race to start,” she concluded.

With less than 50 days to go to the start of the nine-month, 46,000-mile race in Alicante, Spain, on October 22, Nagel and the rest of team AkzoNobel are currently engaged in an intensive program of crew training and speed testing from the Volvo Ocean Race Boatyard base in Lisbon, Portugal.

Under race rules, the entire fleet of seven international teams competing in the 2017-18 edition of the 83,000-kilometer (45,000-mile) Volvo Ocean Race must arrive in Lisbon by September 18 for maintenance checks ahead of a non-counting prolog race to Alicante starting on October 8.