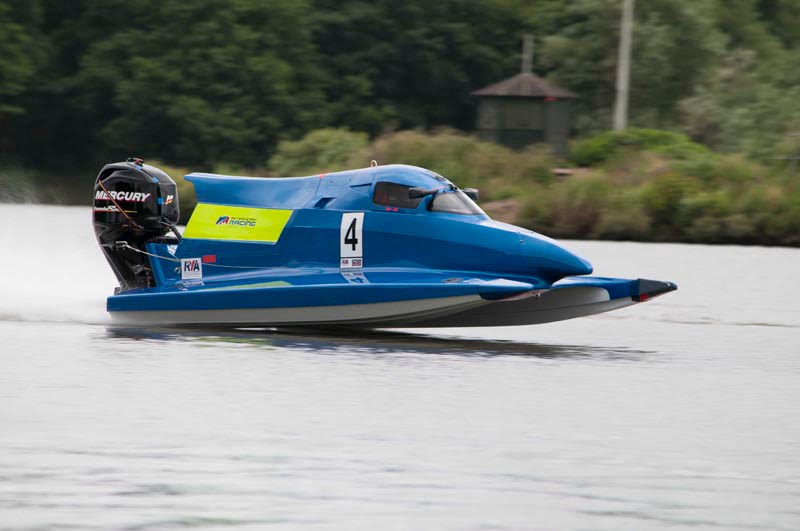 The Kent based Powerboat Racing Team of Jelf Racing this weekend (2/3 July) headed to Kingsbury Water Park in Warwickshire for the Powerboat GP Kingsbury Grand Prix at the half way point in the 2016 championship campaign. In what was set to be a fantastic weekend of high octane racing confidence in the team was high.

In the GT15 class Jonathan Brewer and George Elmore were both focussing on podium finishes for the weekend unfortunately during qualifying neither youngster could get the clean water they wanted and had to settle for a third for Jonathan and fourth for George.  But with less than a second separating the top three disappointment for Jonathan soon turned to determination as they headed into the first heat.

Thomas got the best start in heat 1 but Jonathan was hot on his wake with Harvey not far behind him. George was pushing hard in 4th place when disaster struck on fourth lap as he got caught by a gust of wind coming down in front of the club house and gathering crowds when he went airborne and flipped over ending his racing for the day. George was recovered from the water by Osprey Rescue team and coming ashore managed a wave and bow to the crowds that had gathered on the shore, whilst the hard work ensued for the team in getting his engine dried out and George back on the water for the next day’s racing.

Another second place finish and a third for Jonathan saw him secure the Kingsbury Grand Prix Silver Medal and with it keep his championship campaign alive meanwhile two strong 4th place finished from George saw the youngster recover well and take 6th at the Grand Prix round.

Mixed fortunes for Ben in the GT30 class as once more he secured pole position then headed into the first heat where he fought hard with Tiegen Goodfellow to take the first heat of the win of the weekend. Once more Ben looked set to clean up in the GT30 class over the weekend after winning the second heat as well, only to later find out he was disqualified following a technical inspection.

Back on the water for heat 3 and Ben was at the back of the grid determined to make up for the disappointment of heat 2 the youngster was focussed on salvaging his weekend and championship dreams. However as the lights went out for the final heat Tiegen Goodfellow got a blistering start from pole position and started to pull away from the fleet. Ben went into the first turn alongside adversary Thomas Mantripp and as he came out the turn started to pull away from Thomas.

A battle ensued for the next 8 laps as Ben tried to catch Tiegen with every manoeuvre of the course but the young Lady driver held her nerve to take her inaugural Grand Prix win. Ben took second in the final heat and managed to take the Bronze podium position and keep the lead in the 2016 GT30 Championship.

Back on the water Ben was also competing in the F4 Catamaran class this time in a brand new Baba hull and all eyes were on Ben to see what the capabilities of this new boat would bring for the youngster. Meanwhile on a rare weekend off from competing in his F2 team manager

Colin Jelf decided to compete in the teams other F4 through its paces.

Once more it was Sam Whittle that set pole position being the only competitor to go under 52 seconds in his lap times. Rob Veares secured second with Ben Jelf in third and Colin in 4th but with less than a fifth of a second separating them things were about to getting very interesting as they headed in to the heats.

Ben finished heat 1 in third place putting in a strong performance in his brand new boat whilst Colin once more got to grips with the smaller boat and style of driving to take 6th place.

In heat 2 Ben and Matt Wood went head to head for fourth place behind Colin Jelf in third and as they headed up the back straight neck and neck Ben felt his boat start to lift adjusting his trim to settle the boat the gust took Matt Wood flipping him out of the race on lap two. With the restart underway Ben got a better start than Colin and raced his way home to another third place finish with dad Colin taking 4th.

As the lights went out for the final heat of the weekend championship leader Sam Whittle once again got the best start and as the boats rounded the top turn Ben Jelf was sat in second with Rob Veares having a problem off the start. Ben held on to second place in heat 3 and with it his first podium place in the F4 this season securing the bronze medal behind Sam Whittle in first and Rob Veares in silver and boosting himself into third in the championship campaign. Colin Jelf took another 4th place finish to secure 4th overall in the Kingsbury Grand Prix.

Reflecting on the weekend team manager Colin Jelf had this to say “It’s been a difficult weekend for the all of the team. As a team we know that some decisions can go against you in racing but it doesn’t stop you feeling disappointed.”

“However the team all showed great resilience in getting back out on the water and making sure we made up for the disappointment. We’re still in contention for 3 Powerboat GP RYA British Championship Titles and two other championship podium finishes so we’ll we’re now focussing on the next event in 2 weeks time and are ready to come back fighting.” He continued

“The team would like to congratulate all the Kingsbury Grand Prix Champions and offer our thanks to Powerboat GP, Midlands Powerboat racing Club, the officials, Rescue teams and all our fellow competitors for a great weekends racing. Also thank you to all our Sponsors, Peters & May Racing, Castlemaine Accountancy and YourPrintPartner.co.uk and all our supporters who’s continuing support in invaluable to all the team.”