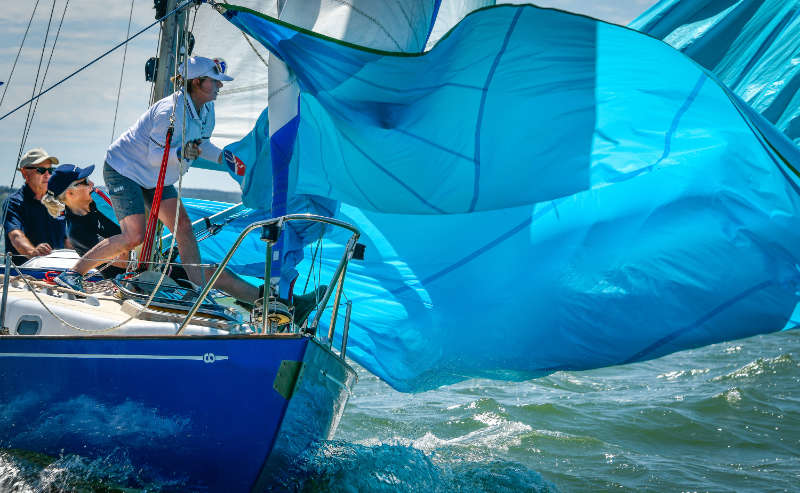 Sailing conditions could not have been better for the opener of the five day series of the 12th Cowes Classics Week yesterday.

Fittingly, from amongst the 143 yachts taking part, Lawrence Wride’s 1967-built one tonner Sunmaid V was the first yacht to get away at the opening gun of the day, when she led Class One, setting the pace once again after her overall win in last year’s event.  Sunmaid V, back to defend the historic 1792 Cup, went on to win in class when she beat Stephen Brookson’s S&S Swan Kiswala into second place over a mid-Solent course.

A southerly breeze gave the race committee the challenge of setting a fair course for Class 1, along with Classes 2 and 3, the Gaffers and Folkboats, since they were all coming off the organising Royal London Yacht Club’s shoreline with no chance of a first beat from the north facing shore. But Derek Hodd’s race team managed to pull it off, giving short legs and plenty of mark roundings to each of the fleets, much to the appreciation of the competitors.

“It was a superb course,” commented Barry Dunning, who was representing owner Bob Fisher on his pretty little 123 year old Solent One Design Rosenn, adding “There were a lot of changeable conditions and wind shifts, including a change of course for us in the Gaffer class, which kept us all on our toes.”

Indeed the shoreline fleets encountered some light and fluky winds near the island shore.  “The further we got away from the island the more the breeze filled in,” reported Julian Sowry, who was sailing along with his wife Claire in their Folkboat Mistral. “We had some really major shifts putting us into last place and then eventually back into second.  There were a lot of position changes during the race.”

Mistral had a hard battle with Jim Tennant’s Paloma around the latter part of the race but it was Stuart Watson’s Crackerjack which went on to win the Folkboat class today. Adding his voice to the quality of the course setting Julian said “It would have been hard to do better.”

The rest of the fleets were divided between four committee boat courses which were able, by and large to lay windward leeward courses further north and away from the shelter of the island in good stiff and steady breezes.

The XOD fleet, always the largest at Cowes Classics Week, numbered 36, providing for a thrilling spectacle on the startline.  True to form, the first start ended up in a general recall, as is so often the way in this competitive class, before Race Officer Bob Milner added a U-flag disqualification threat ensuring that they got away cleanly at the second attempt.  A very even line ensured a good spread of the fleet at the start, with David Palmer’s Princess Jalina taking the lead at the first mark rounding and managing to extend it right until the final leg where Roger Yeoman’s Xcitation,  hot on her heals split at the second leeward gate, chose to go left then committing to the right hand side of the course.  Aided by a wind shift he took the win leapfrogging to the front.

Tight racing was also the name of the game in the Daring Class where Sir Richard Ottaway, sailing Division Belle reported “It was quite a challenge with the tide turning during the race.  We were fourth out of the first windward mark and then climbed to second place.  There were a lot of places changing just behind us.”  Today’s Daring winner was Richard Acland sailing Dauntless.  He kept out a huge lead throughout the race.  “He’s going to be hard to beat this week,” commented Richard.

In the other race areas tight racing was also the name of the game for the Bembridge One Designs, with Russ Fowler claiming victory in BOD1, and the Solent Sunbeams, with Roger Wickens’ Danny taking 1st place.

With Red Funnel as Signature Sponsor and live coverage from on the water courtesy of Cowes Radio 87.7fm the event is shaping up to be one to remember.

The busy social calendar includes the Winkworth Tea and Cakes which are held after racing each afternoon at the Royal London Yacht Club. New for 2019 is a display of interesting and classic cars at the Classic Boat Museum event on Tuesday evening which includes an Aston Martin DB2/4 with a fascinating provenance. The Cowes Corinthian YC and the Island Sailing Club are helping on the water. Red Funnel, Signature Sponsor for Cowes Classics Week, is providing invaluable support for both the organisers and competitors including discounted travel fares to the event.