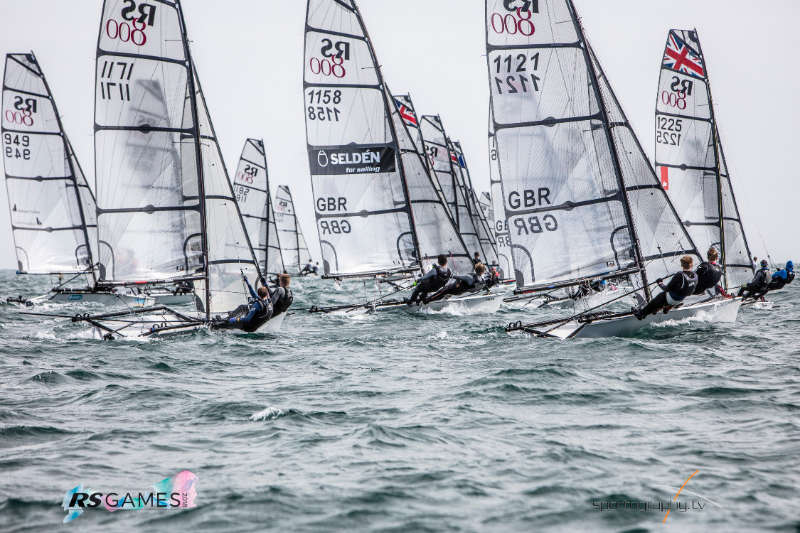 Rain rain go away come back when the RS200s are here.  Day one of the RS800 Nationals dawned with it chucking it down with rain which is safe to say isn’t what we expected from the 2018 great British summer.

However, thankfully the weather got the message and once the thorough briefing and welcome was over, the fleet launched for the bay in a dying 10 knots North Westerly.  The sail out to the bay gave everyone a chance to shake out their rigging mishaps – special shout out to Martin Brooks and Ian Brooks and for managing rig their trapeze wires inside the main halyard, AND their kite halyard inside the jib hanks.  Perfect.  Wooden spoon prize!

Now to the racing.  It took a LONG time to get started.  Due to the abundance of pros (and some egos) the line was pushed very hard and new records were made for the RS800 fleet. The norm of a nice, leisurely, calm fleet was long gone and the recalls were out in force.  We managed to put the race officer through a grand total THREE black flag recalls. Unheard of. Finally we got away on the fourth go.  Tom Morris and “Hi I’m Guy” Fillmore got a jump on the fleet from the middle of the line, along with Ian and Chris Martin.  In hot pursuit were Tim Gratton and Fiona Hampshire, The Cockerills, Maddy Anderson and Matt Reid, and Simon Hiscocks and Ellie Aldridge.  The first run shook out a few of the gaps whilst Tom and “Hi I’m Guy” extended their lead.  The rest of the fleet were left to race for 2nd place which Tim and Fiona managed to nab on the line from Maddie and Matt.  The Cockerills pulled up to fourth whilst Simon and Ellie finished in fifth.

Thankfully, the fleet were back to standard RS800 ways with a nice and clean second start. The boats on the left started pull ahead half way up the beat but again it was Tom and “Hi I’m Guy” who nailed the layline into the first mark.  There was no catching them after they stepped on the accelerator downwind.  There was a big scrap for the rest of the podium, including a game of hide and seek tying to find the windward mark.  Rory Hunter and Steph Orton made massive gains pulling through to 2nd with John Gimson and Anna Burnet in 3rd and Luke and Emma McEwen in 4th.  All that was left was a huge beat home for beers in the sunshine.