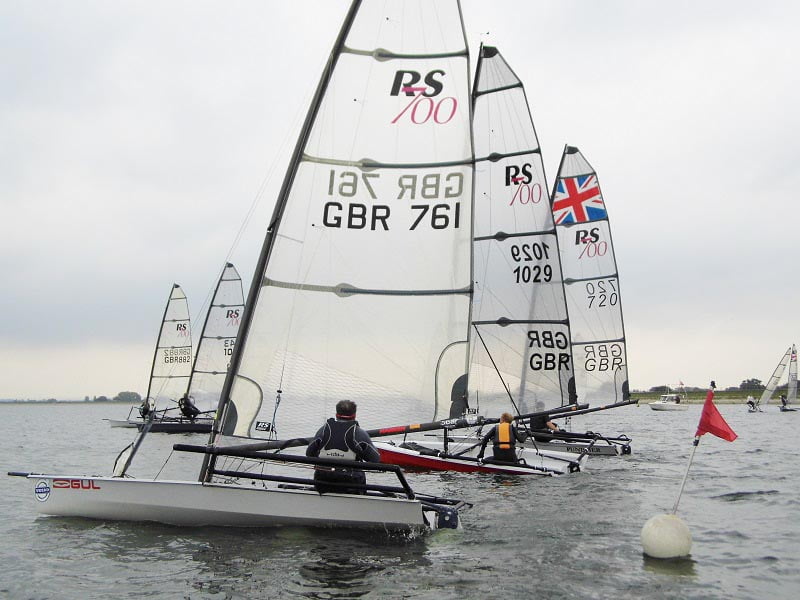 This year’s Gul Inland Championship at Queen Mary Sailing Club was a great close to the end of the RS700 2015 racing calendar with 13 boats competing; the best turn out for many years with sailors travelling from as far away as Falmouth, Wales and the Isle of Wight.  With the reigning and two former National Champions in attendance the competition was strong, with some close racing enjoyed throughout the whole fleet.

The strong winds forecast throughout the week didn’t materialise and the first two races on Saturday were sailed in a Force 2-3 with some large wind-shifts to keep the sailors on their toes.  These conditions saw Jerry Wales and Ben Willows battling for the lead with Jerry eventually taking the first race and Ben taking the honours in the second.   Jon Heissig achieved a very impressive 3rd and 4th places in his first outing for a number of years, with Peter Purkiss posting a 5th and 3rd.

With the wind increasing for the third race, Richard Wadsworth’s weight disadvantage diminished, and assisted by a favourable wind-shift he found himself first around the windward mark.  This was to be short-lived however, as Jerry ‘Higher and Faster’ Wales quickly restored normal order on the following lap, with Richard eventually finishing 2nd and Jon coming in 3rd.

The second day saw the wind blowing from a Force 2 up to a solid Force 3 at times.   After some close racing for the lead on the previous day, Jerry turned on the magic and gave us a 3 ‘bullet’ masterclass, to take the overall Championship win.  Jon Heissig had clearly blown away the cobwebs (literally – his boat was covered!) by day two and showed steady improvement throughout the event claiming a 3rd and two 2nds; taking 2nd place overall.  Peter Purkiss showed great speed throughout the weekend to take a well deserved 3rd place overall.

Despite showing great speed throughout the weekend Ben Willows was unlucky to be OCS in race 4 and didn’t compete in R6 as he had to leave early to make the Isle of Wight ferry (probably unaware he was OCS in race 4!).  I expect Ben to be a real force to be reckoned with in the coming year.

The event was a great success and all the competitors were hugely impressed with the hospitality of Queen Mary SC and its members.  A special thanks to Hamish Griffiths with his bacon butties on arrival and generously providing some additional ‘wine prizes’ for the visiting sailors.

Congratulations to Jerry for another great performance and winning the RS700 Gul Inland Championship!