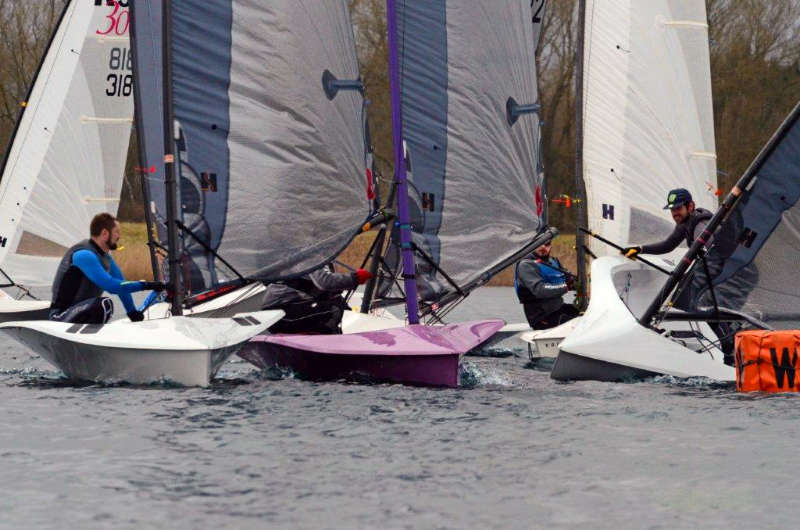 The RS300 Rooster National Tour 2018 kicked off with the Spring Championship hosted by Bowmoor SC in the Cotswolds.  And it was actually surprisingly Spring-like despite Storm Emma having deposited several inches of snow in the surrounding area the previous weekend.  What a lovely club Bowmoor is with a great clubhouse, changing rooms sufficiently large that you’re not obliged to get intimate with the other competitors and a fantastic, if bijou, sailing area.  What more could you want from a sailing club?  Cake, obviously.  They had that too, lots of it.  And cheap beer. Enough of my dietary requirements though.

For the first time since anyone can remember Steve Bolland wasn’t the last to arrive.  But hadn’t he categorically said that he was going to be concentrating on his other boat and wouldn’t be attending?  What was he doing here?  “300 sailing’s like a drug” he said, “You can’t give it up”.  “Columbia’s finest?” suggested Rich le Mare who clearly knows his African bush from his smack…

The Southerly breeze blowing across the lake for the four races on Saturday meant short beats and lots of reaches, putting a premium on starting, not particularly good news for Alistair McLaughlin who was OCS in the first race of this event last year after a 400 mile drive from Prestwick.  He belied his lack of practice in race 1, though, by getting away cleanly and putting in a great result before reverting to type with an OCS in race 2.  And 3.  It would get better.

At the end of day 1, during which virtually everyone had a shocker at some stage, it was close at the top. Bolland was the most consistent but a couple of good races in the middle by Paul Watson of the home club and a late surge by Peter Mackin, going well in the Association boat, put them right in the mix.  Also going well were Richard Hargreaves who’s getting quicker by the event and leading lady, Emily Watson, in the second of the Watson’s fleet of RS300s.

The breeze on Sunday was lighter and blowing more down the lake meaning longer beats but still with a lot of downwind work involving three gybes per lap.  Just as well the wind was lighter perhaps.

Race 5 and Mackin was off the start-line like a scalded cat.  I don’t know what he’d had for breakfast but he meant business and was never headed.  With Watson (P) also going well and Bolland having his worst race so far the scene was set for a tense final race.  It delivered in spades.  Bolland didn’t know the scores but Mackin did – first blood to Mackin – but Bolland was on 7pts and Mackin 8, Bolland with the better discard. Watson and McLaughlin couldn’t be discounted if the leading pair put in another high score.

Bolland was rolled by McLaughlin off the line, having to tack off and leaveMackin to go hunting for breeze on the left.  This was not good in my boat with some tense foot jigging going on.  The jigging got worse as the wind went left.  Luckily (for me) it went right a bit towards the end and my foot could relax.  Bolland and Mackin were overlapped at the first mark and, knowing his discard was better, Bolland took Mackin high on the first reach but relented a bit once four or five boats had come through to leeward.  And that would have been it if Mackin hadn’t have been so goddamned fast.

Bolland covered Mackin up the next beat but they began to make inroads in the boats ahead although McLaughlin and Hargreaves were miles clear.  Mackin had overtaken Bolland by lap 3 and covered closely. The jigging restarted.  A big left shift put them in 3rd and 4th with only a couple of lengths, and Watson (P), between them but that would have been enough to give Mackin the title.  The jigging got worse.  Bolland managed to get water on Watson to put him immediately behind Mackin, giving the former the upper hand once more, but it was anyone’s race to be honest.  Watson’s demeanour wasn’t improved by his wife overtaking him downwind.  And I doubt if he was impressed by Le Mare making a surge and getting caught at one point in a Watson sandwich.  I’m not even going there…

Anyway, back to the action.  Where were we?  Mackin in 3rd place ahead of Bolland and Watson (P). Mackin’s ropey gybe at the final mark allowed a gap for Bolland to exploit.  Exploit it he did and was looking all smiley until he realised the leaders were off doing another lap.  So, more covering on the last beat, more tense downwinds, more jigging but after 45 minutes of extremely close racing (apart from the leading two of McLaughlin and Hargreaves who could have been in another race), it was a relieved Bolland finishing ahead of Watson, Le Mare and Mackin.

Many thanks to Rooster for the sponsorship, everyone one at Bowmoor, not least Emily’s mum for the chocolate cake (sensational), Robert Redman for the gift of his boat to the Association and Mark Newton for putting it back in a competitive condition.  The RS300 Class Association boat is available to anyone wanting to have a go in an RS300. Seriously, do it.  Just contact Richard Le Mare through the RS300 Facebook page – https://www.facebook.com/groups/55859303803/?ref=bookmarks