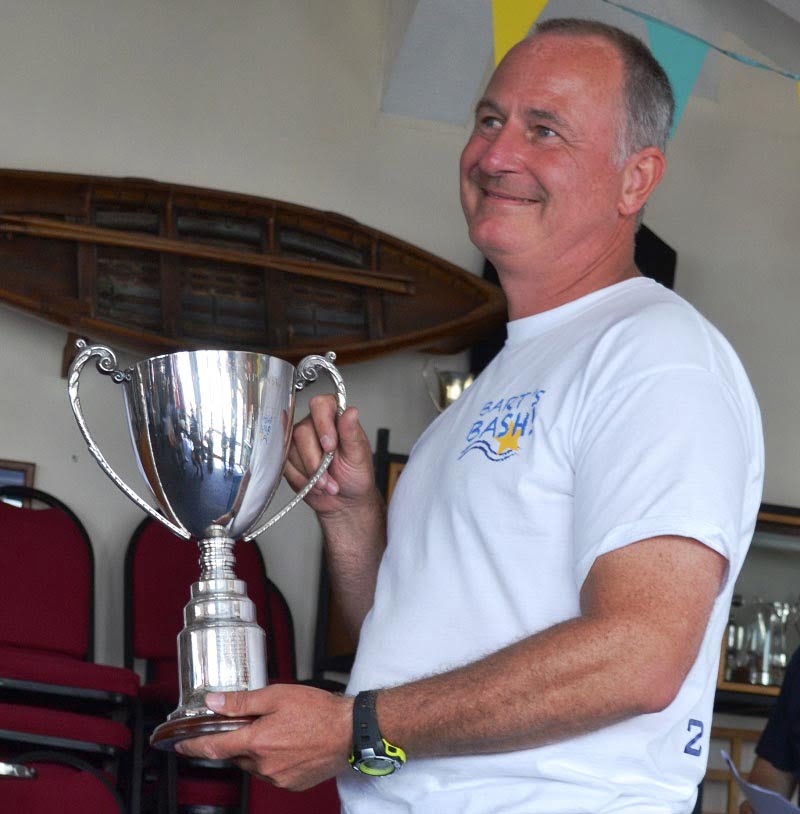 The Endeavour Trophy is a wicked event with 8 races, all at least 45 minutes long, sailed over two days in identical boats in a highly tidal estuary. Think of the last day’s racing in at the Nationals in Aberdovey, with a strong tide except the course is bigger and you are out on the water for at least 6 hours. The races are all ferociously tight. It’s like competing against 20 plus Mr Bollands, with a whole Nationals packed into 2 days.

If you don’t race a two man boat then you are already at a disadvantage, since many of the other guys have won their Nationals together. And if you think the youngsters will be easy to beat then think again. Many of them have had twice as much coaching as us old fellas, they are twice as fit and have generally beaten vast numbers of other pesky teenagers to win their Nationals.

This year’s event was run in RS200s all supplied with brand new sails. Luckily Hugh Watson (another Emsworth SC member) offered to crew and provide his boat. He was an ideal crew, being both light, strong and a very good sailor in his own right. Having been the Scottish Champion of Champions 3 times, as well winning the 4000 Eurocup, he knew a thing or two about sailing. He only had two downsides: a) he is Scottish and b) he was not as stunning as the nubile young chick I always imagined I would have crewing in a RS200.

We arrived Friday morning and collected our new sails with RS300 on the jib and went off to do some short practice races against all the others. I had to learn to take the main from the deck and keep the tiller facing forward, which generally tied me in knots, but we did win one of the practice races, which was surprising. Had a few beers Friday night to prepare and hence felt perfect on Saturday morning. Luckily we had a room at the club to sleep in. The preparation paid off, and with a perfect pin end start and an early tack off we cleared the fleet and were first round the windward mark with the Saxton brothers fighting against each other in our wake. The light wind made the run simple. Find the breeze, stay out of the tide and go as deep as possible. Ben Saxton snuck through us, but after two rounds we were still 2nd. I warned Hugh that it was a pure accident and told him not to get too excited. And with good reason too, because then the breeze built up to 12 to 15 knots and the light guys who knew what they were doing just flew downwind. Ben Saxton was in a different league with a 4 minute lead over everyone half way through race 2. In spite of rounding the windward mark in the top 5 most of the time we just lost truckloads downwind. I asked Hugh for his advice on the way in and he told me all the things I was doing wrong. Luckily it was a long sail in so he had time to explain all my mistakes. Basically we had to be much slicker through the gybes, and absolutely had to keep the boat planing. Every time you stop planing another bunch of guys go straight past.

Fantastic meal in the evening with Nick Craig on the same table. He is as quick at devouring bread rolls as he is on the water. A small but, I like to think, elite group stayed up to nearly 11pm drinking, including the Saxton brothers and Mr Craig but after that it was like being at a Laser open. Day 2 and slightly more wind. With 15 to 20 knots we managed to keep it on the plane downwind and were back in the game. With a 6, 5 and 3 in the first three races it really felt like we were starting to work as a team. Hugh was brilliant and kept me totally focussed downwind. Last race, and the tide was ripping us all over the line at the start. This, combined with a bias to the pin end, resulted in a really tricky start. We went shit or bust for the pin and were a tad too early. Gybing round to avoid being over the line and hitting Rob Lark the Hornet Champ resulting in the need to do a 720 was a very costly mistake. And that was it, game over. We fought our way back to 13th but never had a real chance of getting back up there.

I have to be honest; the last time I did this event two years ago I only managed a 17th, the weather was miserable, the Xenons were miserable and I felt a bit miserable. This time it was fun, and I am more than happy with an 8th. The RS200 is a great little boat and if I was a couple of stone lighter, and perhaps a bit younger I would sail one. Hats off to Ben Saxton and Toby Lewis. They were awesome and I’d definitely put a fiver on Ben for the Olympics.