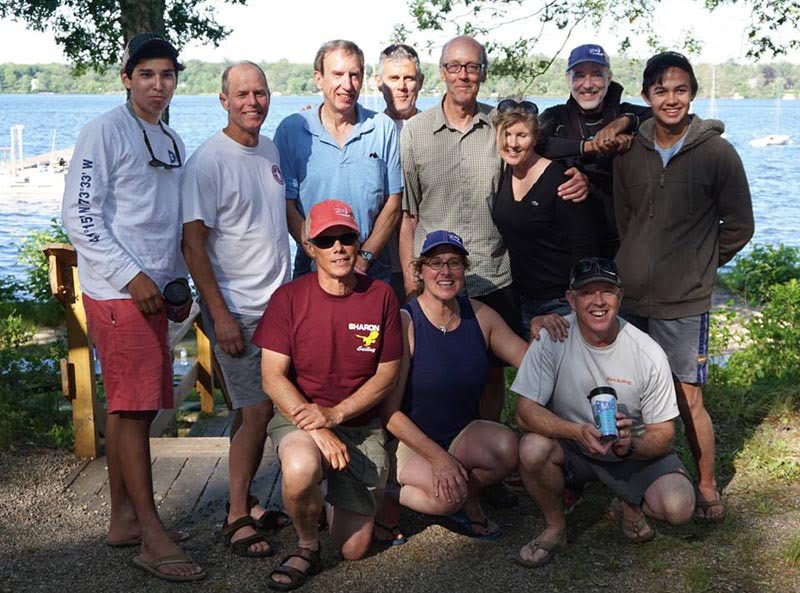 What a difference a year makes!

In 2015 this regatta was memorable as being the first regatta for RS Aeros ever held in North America east of the Rockies. There were three RS Aero sailors, Gary Werden, Eric Aker and myself, Derek Stow. We had only taken delivery of our RS Aeros a couple of weeks before. Eric won.

This year sixteen RS Aero sailors showed up for the event. There were sailors from Massachusetts, Rhode Island, Connecticut, New York, Florida and the UK. Obviously the word had got out far and wide about the wonderful hospitality, superb race management, and perfect weather that one can always expect at the MYC Small Boat Regatta. And this year was no exception.

Winning the RS Aero fleet this year was Gareth Griffiths from the UK. Regatta chair Diane Kampf explained at the skippers’ meeting how Gareth had flown in from England in his private jet especially to sail in our regatta. Unfortunately the truth was a little more mundane. Gareth was visiting the Boston area on business last week and realized he could take in some RS Aero racing if he stayed over another day. Gareth was very helpful to many of the sailors in passing on tips about how to rig and trim and sail the RS Aero and made a lot of new friends. We hope he will be able to come back and sail with us again one day.

In a very close second place behind Gareth was Marc Jacobi. Marc is a former Olympic campaigner in the Laser class, has won masters national championships in Lasers, and is our current Laser district champion. He bought an RS Aero a few weeks ago and it is clear that his Laser skills transferred easily to the RS Aero. He came first in the RS Aero fleet at the Wickford Regatta earlier this month. Marc has also taken on the role of managing a fleet of eight charter RS Aeros for RS Sailing, all of which were in use at this regatta. A couple of the charter boats were being sailed by the two RS Aero owners from Florida, but most were chartered by sailors whom I like to think of as future RS Aero owners. Huge thanks to Marc for adding eight more sailors to our fleet, not to mention coaching other sailors on how to sail the RS Aero. I will always treasure the memory of seeing Marc sailing around between races shouting out to anyone who would listen, “I love my boat!”

In third place was MYC’s own John Eckart. I understand that John owns a Flying Scot, a Laser, a Sunfish, a Moth (and maybe a few more I haven’t heard about) and that he is fast in all those classes. He certainly put on a very impressive performance in his first regatta in an RS Aero and, like Marc, was very ready to share his enthusiasm for the RS Aero with anyone within earshot.

In this regatta, the RS Aeros with 7 and 9 rigs were sailing together as one fleet. The first three sailors were using the larger 9 rigs, but Bob Adam in a 7 rig stayed very close to the leaders all day and took fourth place overall. Bob is the VP of Sales for Zim Sailing our local dealer for RS Aeros. Although Bob’s job gives him many opportunities to sail all sorts of cool boats, he doesn’t often find the time to race small boats in a regatta. But he did sail the RS Aero at the Wickford Regatta and at this event. His enthusiasm for the RS Aero was obvious as he sailed screaming reaches back and forth between races like some teenager who had just discovered the joys of planing.

Rounding out the top five, and winning one of the coveted mugs with pictures of Gary Werden and me on it was Eric Aker. Has anyone noticed Eric’s unique style of sailing in an RS Aero? He trims the mainsheet directly from the boom, upwind and downwind, in all wind strengths. What is that all about? Doesn’t he have a ratchet block? He tells me that this method puts less strain on his back, and I guess he should know because he is a retired doctor. He must have biceps of steel! This technique certainly works for Eric but I think I will stick to using my ratchet block.

In sixth place and first female sailor was the amazingly talented and versatile Judith Krimski. Judith was sailing a 9 rig, supposedly the rig of choice for big manly men, and although she admitted to having some trepidation, Judith reported that the rig depowers very well and she never felt overpowered. My spies report that, after this regatta, Judith immediately put one of her other boats up for sale in order to raise money for her “Aero fund.”

In seventh place was my son Chris Stow. I would like to be able to say I taught him everything he knows about sailing, but it wouldn’t be true. Chris majored in sailing and minored in engineering at some technical college on the Charles River, and was much in demand as a Star crew later in his sailing career. I think he is working on the theory that RS Sailing will sell off their eight boat charter fleet at some point and he will score a good deal from them.

In eighth place, and second 7 rig, was the very average Gary Werden. Gary was clearly shooting to win the prize for most mediocre sailor at the regatta, awarded at some regattas for the person who finishes in the middle of the fleet. In the first three races his plan was working perfectly as he scored 8,8,8. But then he went and blew it in the last two races. Somehow he couldn’t avoid scoring 7,5 even beating sailing coach extraordinaire Judith Krimski in her 9 rig in one race. Why Gary would want to win a mug with photos of me and him on it, I have no idea.

In ninth and thirteenth places were two junior sailors from Cedar Point YC, Grant Ballesteros and Max Haslett. Thanks to Marc Jacobi for persuading Grant and Max to come to our regatta and providing charter boats for them. It was very gratifying to see these two talented youngsters stepping into the RS Aero and sailing so well. Makes a welcome change for me from sailing around with grumpy old geezers like myself all the time.

In tenth and fourteenth places were David and Melissa Solnick, a delightful couple who live in downtown Manhattan, a place not normally known as a hotbed of dinghy racing. David owns an RS100 and Melissa has an RS Aero and they sail out of Sebago Canoe Club on Jamaica Bay. David and Melissa are planning to sail in the RS Aero European Championships at Travemunde in July and thought that racing at Massapoag YC would be perfect preparation for sailing on the Baltic Sea.

In twelfth and sixteenth places were John Brim and Tom Bowler. John and Tom are both members of the seven strong RS Aero fleet at the Sailfish Club of Florida in Palm Beach. SEVEN!! They must hold the current record for largest RS Aero fleet in North America east of the Rockies. The Boston RS Aero fleet (which is how the three of us who sail at MYC rather presumptuously style ourselves) has some catching up to do. It was a pleasure to meet John and Tom for the first time. John tells me that his fleet is thinking of hosting an RS Aero Midwinters Championship in Palm Beach. That would be awesome. I have wonderful memories of sailing a Laser regatta in that area which was held out on the open ocean off Palm Beach. Amazing waves!

In fifteenth place was Ian Drake from Cape Cod. Ian came to our regatta at MYC in September where the wind left a little to be desired. Well actually the wind went away altogether for most of the time. I guess the club must have been doing something right though, because Ian came back for more and we managed to arrange some superb sailing weather for him on Saturday – warm and sunny and a breeze of about 10mph from the NE. You are always supposed to make up some facts about the wind in a regatta report. I almost forgot.

And last and by all means least, in eleventh place was your scribe Derek Stow. Not exactly my best regatta performance ever, but as I said to Gary before we launched, as we looked in wonder at the sight of SIXTEEN RS Aeros at our little lake sailing club, “I feel like I’ve already won.” Thank you to all the sailors who came to the regatta. You made this grumpy old geezer very happy. Please come back next year and bring a friend.

Derek Stow is a founder member of the Boston RS Aero fleet, an amateur sailor and writer, and a professional liar. Apologies to anyone I offended in this regatta report. Get over it.’

“Great venue and friendly club, definitely a fleet that should grow as the Aero responds so well to the inland conditions being so light to accelerate in the puffs and able to tack the shifts with almost no loss of speed.”

Here is an awesome movie ‘Me and My Aero’ of the 16 RS Aero Massapoag Regatta. Looks like great sailing and racing!

Music by; Harry Nilsson – ‘Me and My Arrow’