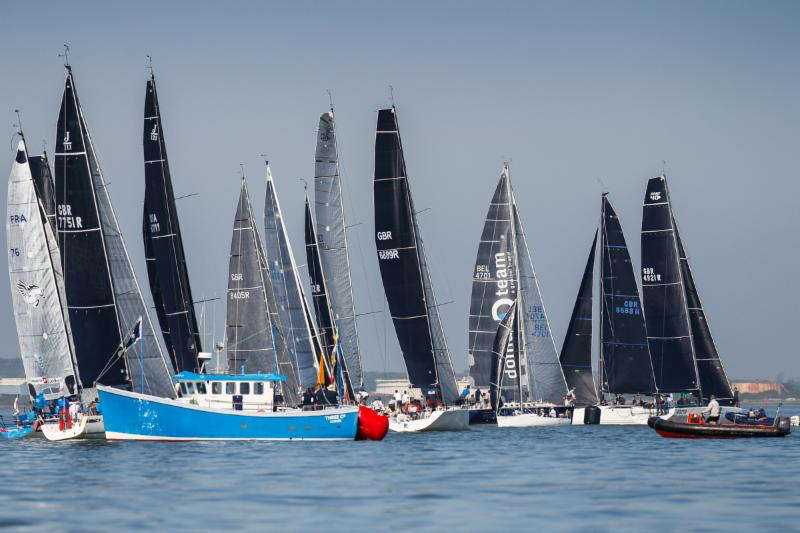 In one of those aberrations that occasionally afflicts our weather-dependent sport, beautiful summery conditions and record temperatures blessed the Solent but sadly permitted the race committee to hold no racing for the entire three day duration of the RORC Easter Challenge.

“Normally Easter is a pretty tough event with a huge variety of conditions, but to have this high pressure system sitting over us just doesn’t work for sailing,” observed Eddie Warden Owen, who, aside from being CEO of the Royal Ocean Racing Club, has been putting his skills as an ex-America’s Cup coach to good use at this event that traditionally doubles as the club’s UK season opener and as its unique coaching regatta. “The race management team has tried to be patient and do the best they can, but despite the cold water temperature and the hot temperature on the land, the northeasterly gradient has stopped any sea breeze from developing. So it is unfortunate – disappointing for everyone.”

Principal Race Officer Tim Hancock said that having no racing across the duration of a three day sailing event was a career first for him: “There is a big high pressure system over the UK and everything is very stable. Today there was a haze around the whole Solent and although it was warm there wasn’t enough heat to burn everything off – just some very localised breezes. And it is not just the Solent – all along the south coast it’s like this. At least we’ve done some practice starts.”

While there was a lot of waiting around, competitors’ time was not entirely lost. On the water today there wasn’t adequate or stable enough breeze to hold a race, but there was just enough for the race committee to lay on some practice starts.

Ashore, the debriefs up at the RORC Cowes clubhouse, led by coaching guru Jim Saltonstall, were as usual standing room-only affairs, with Saltonstall providing his insights into “the world’s hardest sport” ably assisted by the team from North Sails who provided analysis of drone footage from some of the practice starts that took place. On Saturday they were assisted by rules expert Bill Edgerton who gave his opinions on some of the trickier rules scenarios, for example on the start line – giving time for a windward yacht to keep clear – and, the frequently controversial calls from boats trying to get out of the tide on the Solent – asking for room to tack.

Teams made use of the time as best they could. On David Franks’ Leon they had hoped to spend the weekend making further progress getting up to speed on their still relatively new J/112e, following their dramatic ‘fresh out of the box’ class win at Lendy Cowes Week last year.

They had also hoped to line up against Leon’s sistership, Bruce Huber’s Xanaboo. “I was optimistic looking at the forecast early on,” recounted Leon’s navigator Graham Sunderland, also joint author of Winning Tides. “There was always a tiny bit of gradient, but it never seemed to win out. When it is so stable, it wouldn’t have taken a lot in terms of temperature change or something to have created enough to have let us go sailing, but we were just unlucky with how it balanced out.

“We have still achieved a lot. We rehearsed a load of stuff we were rusty on. We checked our safety gear and today we’re going through our container.”

While there were no prizes to hand out at the RORC Cowes clubhouse at the end of proceedings, the usual Easter egg mountain was distributed to winning recipients.