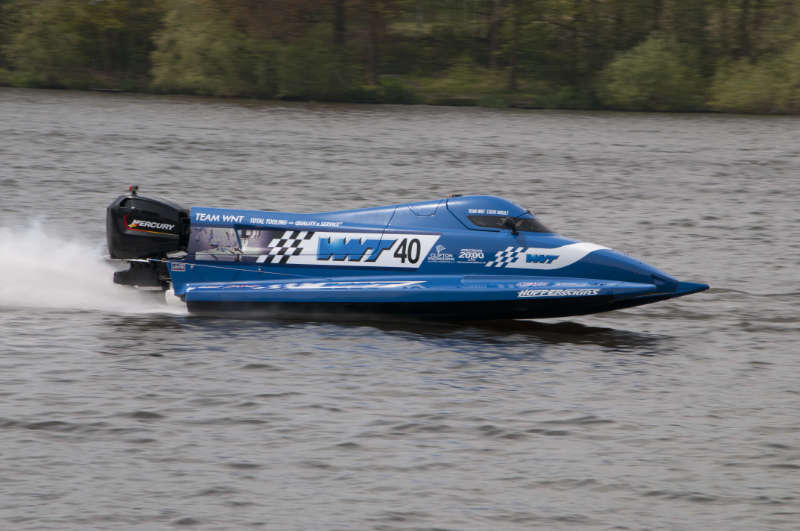 In a season that has spanned over 7 months with teams travelling to five Grand Prix weekends the 2017 Powerboat GP RYA British Championship comes to a close this weekend (7/8 October) as teams head to the WNT Grand Prix at Rother Valley, Sheffield.

Producing an epic battle throughout the season has been Junior racers Harvey Smith and George Elmore in the GT15 class. Heading into the final weekend 23 points stand between the two youngsters who are both fighting for their first British Championship title, but with 61 points still up for grabs both youngsters will be gunning for glory this weekend in attempt to secure the crown. Ethan Goodfellow and Aidan Fleet have shown great skill and determination throughout the season and will continue their battle until the chequered flag drops looking to secure a podium top spot at the season finale.

With a 36 point lead in the championship and in great form Thomas Mantripp looks to have his first GT30 British Championship in the bag. But his fellow competitors are not going to make the final round easy for him and the championship battle will continue throughout the weekend. With Thomas going head to head with Jonathan Brewer, Tiegen Goodfellow and Jack Pickles as they all fight for the final Grand Prix win of the season and look to close the gap on the championship leader.

Bill Owen just needs to finish this weekend to secure his 11th British Championship title in a career that spans over 40 years. The formidable racer will not rest on his laurels though and will be looking for strong finish to the season to seal the crown, knowing that anything can happen in Powerboat racing and usually will. Looking to challenge him for the title is tram mate Steve Cash and Jelf Racing’s Nigel Edwards both looking to take the Grand Prix win and finish the season on a high.

The F4 championship looks set to go down to the wire as Ben Morse and Ben Jelf look to go head to head for the WNT Grand Prix title and the final points in the championship. Ben Morse has been dominant throughout the season but as Jelf has progressed the season the pressure between the two has intensified and is set to produce a thrilling finish to the season as they battle for the crown. Morse has a comfortable 26 point lead but Jelf will be looking to grab a full 100% of the 61 points available this weekend and finish the season on a high. With Martin Wood and Robert Veares also putting in strong performances throughout the season it won’t be a two horse race.

16 points stand between fierce adversaries Paul Balfour and Colin Jelf from the 2017 Powerboat GP RYA British F2 Crown. Neither racer is willing to give up this crown easily, and this weekend an intense battle on the water, will begin as soon as the boats set out for qualifying. Both racers will know the importance of securing the last vital pole position of the season and giving them the best line into the first turn. From Pole position it will be a race of skill, wit and determination with which ever racer takes the early lead having to fight to maintain his lead and the chasing racers fighting for any opportunity to pass and take the lead. While Balfour and Jelf go head to head Steve Hoult will be looking to take the opportunity to claim the last Grand Prix title win of the season.

He continues “We’re very excited to be bringing the championship to Rother Valley and with event Sponsors WNT on board we’re looking forward to a fantastic event.”