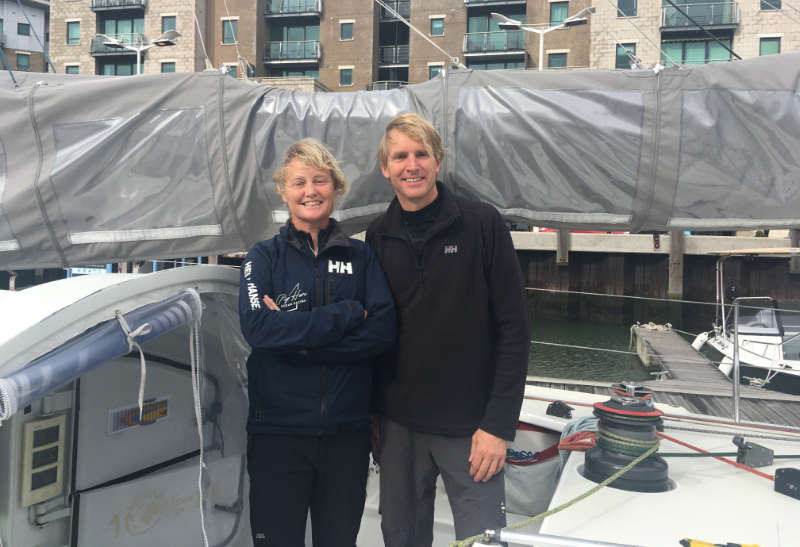 Round-the-world sailor Pip Hare today announced her co-skipper for the Transat Jacques Vabre race, Ysbrand Endt. The race is an important qualifying stage for Pip’s bid to compete in the 2020-2021 Vendée Globe with her IMOCA 60 Superbigou.

With thousands of miles on his CV, Ysbrand has sailed a huge range of yachts from Mini 6.50s to Volvo 70s, and is no stranger to single- and double-handed racing. Currently, he is the skipper of the VO65 known until recently as Team Brunel, which he is in the process of refitting. She will sail next season as Childhood I, representing the Swedish World Childhood Foundation charity and its global mission to protect children from violence and abuse.

Ysbrand has stepped in for the Transat Jacques Vabre after Pip’s previously announced co-skipper, Andrew ‘Hammy’ Baker, was forced to withdraw with a broken arm. “We’ve been friends ever since Ysbrand, his wife Christa and I did the Mini Transat in 2011,” said Pip. “Since then we’ve all sailed together quite a lot in different races. These guys did the Fastnet this year in Team Brunel, so we met up at the finish and they came and did a couple of days sailing with me afterwards.”

Their experience sailing together, along with Ysbrand’s extensive racing involvement, is key to Pip being able to compete at all in the Transat Jacques Vabre. Normally, the race office would require the team to have sailed a qualifying passage, but in this instance have reduced its length as both sailors are so experienced and are already familiar with each other’s sailing styles. “They know that we are serious people,” said Ysbrand. “We are not just doing this for fun, although of course we will have fun. We’re professional sailors, we know what’s going on, we know our business.”

Sailing two-handed is not simply solo sailing in shifts, explained Pip. “The great benefit is that there are two of you working together. You can have one person helming and one person trimming, and then your boat speed is always going to be better. There are two people to do sail changes, and two people thinking about problems. There’s always one person awake so you don’t miss shifts – and also, if you find the right person to sail with, it’s good fun too.”

Ysbrand’s joining the team is great news for Pip, especially as she confesses to be choosy about whom she sails with – “I’ve spent so much time sailing alone I need someone compatible, and it takes me some time to choose” – but also for Ysbrand, who may take part in his own Vendée campaign. “It’s not as advanced as Pip’s,” he said, “I’ll need a lot of luck for it to happen, but this will be my qualifying race.”

The 4,300-mile Transat Jacques Vabre will see the majority of the Vendée IMOCA 60s on the start line. Commencing on October 27th and sailed from Le Havre to Salvador de Bahia, Brazil, the race is one of five acceptable qualifiers for the 2020-2021 Vendée, the others being the Route du Rhum, the Transat, the New York – Vendée, and the previous edition of the Vendée Globe. One race is rarely enough to qualify, however – most competitors will need to sail a minimum of one additional single-handed race of at least 2,000 miles or more to meet the criteria, and newcomers will usually sail all the qualifiers in order to build miles. Places are guaranteed to those who participated in the 2016-2017 Vendée or are sailing a new boat, with the remaining positions allocated by accumulated miles. Pip is on the list to take one of the 34 remaining places, but needs to finish this race in order to retain it.