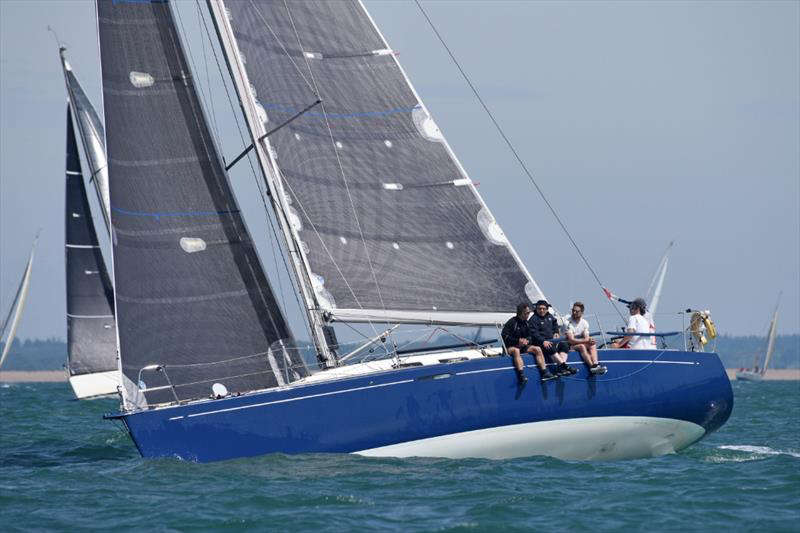 “We like to sail with a small crew who know each other, the harmony on board is very important. In light wind we just keep the boat going, regardless of the direction, we create apparent wind. If you stop then it can take a long time to get going. We are delighted to win the Morgan Cup, I hope that the RORC will return to Dartmouth, it is a magical place, and we had an excellent meal with some very good Burgundy wine at the Royal Dart. A great weekend and thank you to the RORC for another extremely well organised race.” – Nicolas Gaumont-Prat, Philosophie IV

Although light winds were predicted for the race, the fleet experienced the remnants of a westerly sea breeze for the Squadron Line start, lasting long enough for a twilight exit from the Solent. Calms and complex local effects during the night, made observation and experience of light airs racing paramount. As night fell, the breeze dropped significantly resulting in somewhat of a park up off Portland Bill, giving an advantage to the higher rated IRC boats that had made the tidal gate. However, close to Midsummer the night was short, dawn broke before 5 a.m. and the lower IRC rated yachts enjoyed longer daylight racing with enhanced breeze.

In IRC Zero, Ker 46 Lady Mariposa skippered by Daniel Hardy, took Line Honours for the race in just under 18 hours. However, Harmen Jan De Graaf’s Dutch Ker 43 Baraka GP corrected out under IRC to win the class by just over 22 minutes and take second overall for the race.

In IRC One, Edward Broadway’s British Ker 40 Hooligan VII took line honours by just under two hours and with the highest IRC rating in the class was the victor by just over 18 minutes from Maxime de Mareuil’s French Xp44 Orange Mecanix2. Hooligan VII was also third overall. RORC Commodore Steven Anderson’s British Corby 40 Cracklin’ Rosie was third in IRC One.

“We started at the Squadron end of the line and put in a few tacks to stay inshore, and with 12 knots of breeze we had enough to keep Scarlet Oyster powered up for the beat out of the Solent. The good start paid off when we made it past Portland. After that staying offshore worked in our favour; we found more breeze than the inshore boats. After a great race on the water, we managed to just beat Thunder to the line, judging the tide and wind right approaching the finish line off Dartmouth. All in all, a great result for a new team working up the boat for the Sevenstar Round Britain & Ireland.” – Ross Applebey, Scarlet Oyster.

“Winsome has great speed in ten knots of wind and flat water but once the wind is below that progress becomes difficult. We decided to kedge at Portland, and we were in 50 metres of water, so judging when to lift the anchor was important, as it would take 25 minutes to settle the boat down. We think we got that just about right, and as we say in Dutch – without luck, no one sails well!”

“A great finish to the RORC Morgan Cup race coming in first in Class40 and third in line honours in some tricky and fickle conditions. Thanks to Miranda and Halvard on Campagne de France for a great duel, and in particular to Team Concise and Tony Lawson for the continued support, keeping Concise 8 fast!” – Jack Trigger, Concise 8

The next race of the 2018 RORC Season’s Points Championship will be one of the longest. The 704-mile Volvo Round Ireland Race will start from Wicklow on the 30th of June.

For more information about the RORC Season’s Points Championship: www.rorc.org