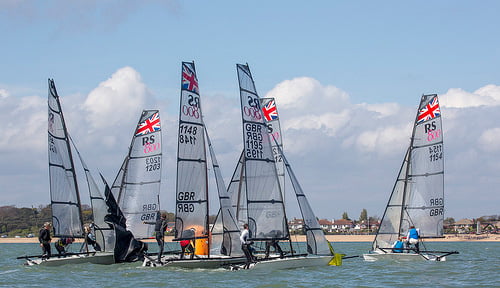 It was either WindGuru predicting we would have a cracking weekend of sailing ahead, or the half price rum happy hour on Saturday night, that tempted 24 RS800s to make the trip to Stokes Bay Sailing Club last weekend.

Day 1 was on-shore about 12-15 kts and reigning National Champions Roger Phillips and Will Crocker were quick out of the blocks, a little too quick perhaps as they were over the line, but this did not hinder them in crawling their way back through the fleet to victory.

2nd were Ralph and Sophie Singleton, with Phil Walker and John Mather in 3rd.   Race 2 got underway, with Roger and Will getting the start right first time and that was the end of that. Hugh Shone and Hannah Tattersall were 2nd, with Tim Saxton and new lightweight crew Fiona Hampshire in 3rd.

Race 3 was a close fought battle for the top 5 with plenty of positions changing on each leg.  On the final downwind Phil and John had squeaked round the top mark in 1st with the pack close behind before disaster struck!  John’s trapeze adjuster broke.  This had him flying out the back of the boat and cheese wiring Phil’s ankles with the kite sheet.  David and Louise Steed changed course numerous times to try and hit John (as payback for a cheeky move last race) but fortunately John is quite good at swimming and was too fast for them.

Tim and Fiona went on to take the win, with David and Louise in 2nd, and Roger and Will in 3rd.   Saturday night involved a pub quiz and (for some) a little too much rum / gin / beer / whatever was in that jug!

Sunday dawned with an 8-12kt offshore breeze.  Race 1 was very shifty and Tim and Fiona got their nose ahead and played the shifts right all race to take the bullet.  David and Louise were hot on their heels in 2nd, with Roger and Will (consistent as ever) in 3rd.

Race 2, the breeze had built a little and a big right shift at the start, meant those that had a good start out of the starboard end and held a lane were on the long tack pretty much all the way to the top mark.   After dodging a few B14s at the leeward mark Roger and Will claimed the victory with Phil and John in 2nd, and Hannah and Hugh in 3rd.

Race 3, the breeze was probably up to 15 kts in the gusts now so there were big boat speed differences across the course for those in the gusts.   Andy and Allyson Jeffries sailed a great race before they were robbed of victory by Phil and John at the final mark who found a cheeky gust on the bottom left (sorry guys!)  All in all, a great weekend of racing.

Thanks go to Stokes Bay Sailing Club for their hospitality, Dan Vincent for his excellent pub quiz, the caterers for the good food, and the bar staff on Saturday night who kept us going till the early hours!

Next event Eastbourne in 2 weekend’s time 9-10 May.