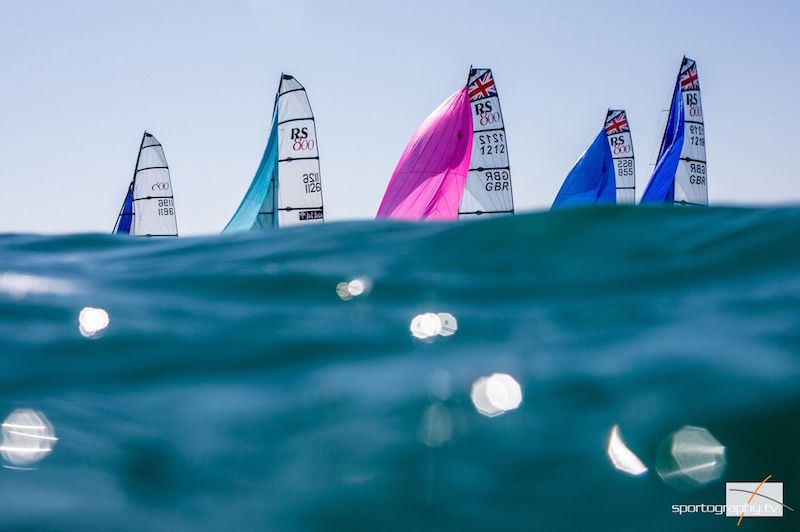 The aptly named RS Summer Championships were held over the weekend of 17-18 June with extra water and sun screen being the order of the day as temperatures rose to 30 degrees .  With 200 boats across the RS classes present it was quite a spectacle and a very busy weekend.

On Saturday racing started on time with the wind coming steadily from the south at 7-10kts.  As ever Luke and Emma McEwen, the reigning national champions, were hot out of the blocks and established a good lead with Phil Walker and John Mather in hot pursuit, and Andy and Allyson Jefferies showing good pace in lighter conditions than they normally prefer.  Race two saw former national champions Tim Saxton and Fiona Hampshire take a bullet from Phil and John with another former national champion Pete Barton and class chairman Chris Feibusch taking third.  Fiona must have been wondering what had happened to all the wind having won the Corinthian class and finishing 5th at the recent J70 Europeans, in winds which varied between 25 and 35kts, two weeks earlier.  Towards the end of race two the wind started to become a little less stable, initially swinging a bit to the East before moving slightly West of South and falling a couple of knots.  Having attempted and just failed a port flyer in race two Ralph and Sophie Singleton repeated the tactic in race three with Phil and John joining them.  This time both managed to cross the fleet by 2-3 boat lengths, hit the lay line with tide now having changed direction and round the first mark with a useful lead.  Phil and John took the race win with Ralph and Sophie in second and Andy and Allyson leading the starboard starters home in third.  The fleet were welcomed ashore by RS Sailing the event sponsors who had laid on some much needed cold beers .  Thanks to Alex and his team for organising that! So overnight Phil and John led from Luke and Emma, with 3 boats then tied in third place.

RS sailing had also laid on a band and a curry was enjoyed by all.  So many questions were still to be answered:  Would Luke and Emma finally come of their long winning streak?  Would the sea breeze fully develop on Sunday? and how long would it take us to get off the island after the prize giving?  The answer to question two was no with wind looking to be barely over the 5 knot minimum required to race and a one hour  postponement was required.  With this in mind Paul Jenkins and Nick Jerkins decided that the 15 minute option to getting off Hayling was their preferred choice and packed up the boat as Nick was not tempted by another day in the cockpit.

Luke and Emma decided that the answer to question one was no as they took a bullet in the first race where either the helm or the crew getting on the trapeze was a “Brucie” bonus.  Ralph and Sophie had persisted with their port tack starting option, this time ducking a few boats but then getting some clear air out on the right.  However James Hughes and Toby Wincer had been going quickly and left the Singletons with a decision whether to tack in front but clear of them or duck them.  They chose the former but did not quite come out of the tack quick enough and took a penalty turn.  Despite this they recovered up to second by the end of the race with the Jefferies taking third.  The three boats lying in third place overnight were all struggling on day two in the lighter breeze.  Race five saw the emergence of Ella and James Moreland who were starting to show some real pace upwind and chased Luke and Emma around the race track to take second with Dan Goodman and Debbie Clark taking a well earned third.  As with day one there was a wind shift before race six which finally added some starboard bias to the start line.  Ella and James made the most of this but had Ralph and Sophie chasing hard.  By this time Ella had perfected her downwind technique and any gains that Ralph and Sophie had made in previous races downwind were negated giving Ella and James the final race win. Third place went to Martin Orton and Ian Brooks who have recently bought Roger Philips’ championship winning boat.  They were starting to show some good boat speed in the light winds which have not previously been their forte.

So overall Luke and Emma managed to keep the pack at bay and take another event win, with Phil and John just managing to hold onto second by a point from the Singletons in third and Ella and James taking fourth.

This was a blistering hot weekend with some excellent race management by the race team which managed to complete a series.  Thanks to HISC for the great organisation, to RS Sailing for sponsoring the event and to Harken for the prizes.  The RS800s move on to Eastbourne SSC in two weeks’ time where we will be welcomed with the usual amazing enthusiasm.  After that it is Lyme Regis SC in early August but because this is part of their regatta entries may be limited so early entry is advised.  Despite taking all the back routes it still took the author one hour to get off the Island but thankfully the A3 was relatively clear.  See you all at Eastbourne.