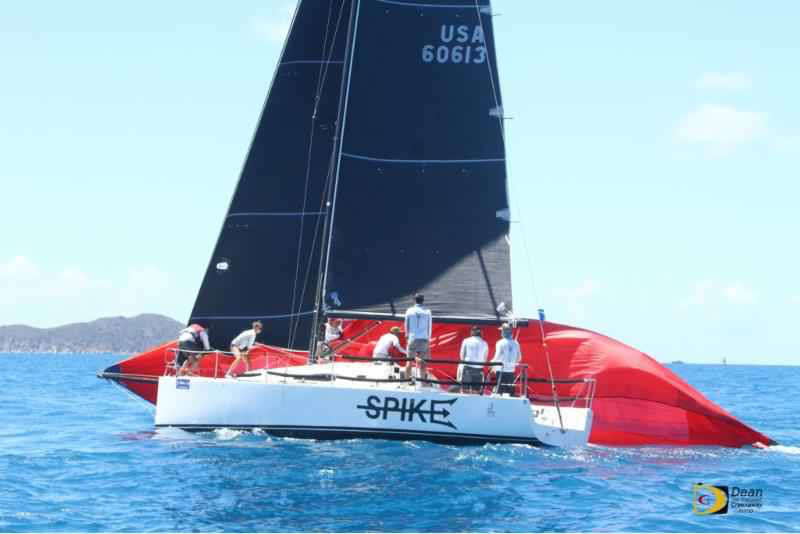 At 87 years old, Robin Tattersall is the only skipper in this year’s edition of the BVI Spring Regatta to have taken a bullet for each of the races he and his crew have sailed. Racing in CSA Bareboat 3 with his crew on Sunsail 41, Gatos del Sol/Makin’ Memories, Tattersall said while it’s the first time he’s raced this boat, he has a good crew around him to tell him what to do.

“We have a very experienced crew on board and a lot of local knowledge,” Tattersall said. “We try to get good starts and stay ahead. Today in race 2 we had a bad start but ended coming from behind to win by a boat length. The boat is set up differently to that which I am used to which is sometimes frustrating as it’s not easy to do a lot of quick work!”

Conditions were light overall with 10-12 knots on the Sol course and 8-10 knots on the Norman course, from a north easterly direction. Sunscreen – lots of it – was the call for the day as sailors raced under brilliant sunny skies. The lighter air today favored some, resulting in shifts on the leaderboard. In CSA Racing 2, the Belgian team on Samantaga, a Swan 45, made good on yesterday’s promise to win today to take 3 bullets and an 8th place, moving into first. Blitz, the King 40 skippered by Peter Corr is in second place.

A couple of mistakes cost boats time today: on race 1, Spike, the J/111 skippered by Sam Talbot, had just made their kite on the first downwind leg when the halyard shackle popped. “We didn’t have a second halyard to send someone up on, and the shackle got stuck at the top of the mast. The crew did an incredibly quick recovery, only one boat passed us, and we didn’t lose too much. Still, it was painful on a race where we were doing well.” On the same leg, Soca, the Melges 32, struggled with a reaching light air kite which just was too much for them in the medium air. “It was a lot of work and affected our maneuverability for sure,” Fernando Padre, trimmer. “We had the zero on board but weren’t sure we had the angle for it, but it would have been the safer play!”

In CSA Racing 2, Touch2Play, the Reflex 38 skippered by Canadian Rob Butler has become known in the class as “Untouchable”. “They’re just really difficult to beat,” Peter Stanton, racing the Melges 24 Boogaloo said. Stanton moved into second place today. “We had good speed upwind and with good team work did a decent job of navigating the other fleets that came through us. The first and last race didn’t call for much in the way of tactics, just a lot of reaching. It’s easier for us to do well on windward leewards and in light breeze. The breeze from the north is painful for a small boat like us as it means a lot of hiking on long reaches!”

Flow, the Gunboat 60 owned and skippered by Steve Cucchiaro, is in first after taking two bullets today in the Offshore Multihull division. “We were pleased with our starts today, it was very shifty racing and the team kept us in phase with the shifts all the way up the weather leg which gave us an advantage. Our tactician Jack Slattery called a 20-degree right shift just after the start on race 2, which the others didn’t catch. We just love being down here, the last two days have been fantastic. I have to give credit to Nanny Cay for encouraging us all to come down here, they’ve done an exceptional job and the racing has been great.”

The competition is fierce but friendly between good mates in the Jib and Main class. Long time BVI Spring Regatta participant Jeremi Jablonski, skippering his Hanse 43 Avanti is in first place with 7 points, while Jose Teixidor on the GS 52 Cachondo is in second with 8 points, and Luigi Miranda owner of the GS 52LLC, is in third with 9 points. “We had very tight racing with not much wind which made racing challenging,” Jablonksi said. “We were finishing 10-15 seconds apart, sometimes less. It was a day of typical BVI racing trying to stay close to shore – rocks, shallow water and we got a round of applause as we passed snorkelers near the Indians. It was especially exciting racing with and against great friends.” Jablonksi, with a glass of champagne in hand aboard Estela at the end of racing, said he wouldn’t be able to keep up with the fleet if he didn’t also start the racing day at 9am with champagne.

In the Multihull class, Eddie Brockbank on Lucky 7, a Corsair Spring 750, is having a great regatta in his new boat in first with 5 points. In second with 9 points is Piglet, the Newick Teegull Tri. Piglet crew David Walworth said, “It’s a good class now we have a couple of new boats, we’re having a great time. The two Corsairs are figuring it out, Eddie did a great job today and Barney on Airgasm is on a nice learning curve in a good way. The race is for second place right now.”
Tonight’s Blue Moon is the last one until 2020 and after racing crews enjoyed Blue Moon Beer at the Regatta Village to celebrate the second full moon in the calendar month.  Sunday is the final day of racing – Happy Easter to all our participants and supporters far and wide!
Results after two days can be found here:
https://www.yachtscoring.com/event_results_cumulative.cfm?eID=4419