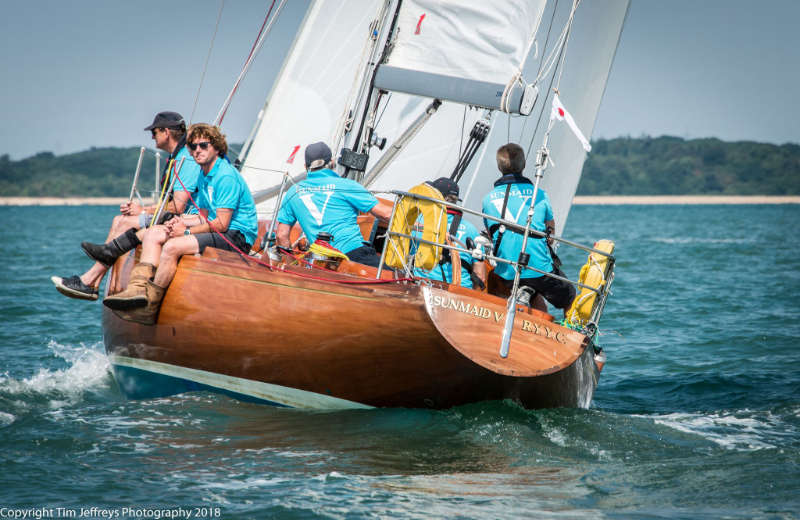 The second day of the 11th edition of Cowes Classics Week, the Red Funnel Race Day, saw the English heatwave continue unabated but with lighter winds than yesterday’s opening day.  After a postponement of two hours, and more for some classes, racing got underway in the Solent when a steady south westerly set in during the afternoon.

As the wind kicked in racing for the cruiser class fleets, racing from the Royal London Yacht Club’s shore line, got underway.  Some of the oldest yachts in the 160-strong fleet were lined up one of five race course areas for the 16 classes taking part, including Olympic Soling medallist Ossie Stewart and his all-star crew including father and son Damon and Alan Roberts in his recently acquired Thames Rater Dorothy built in 1984. The team scooped two wins today in the Gaffer class.

Despite the headache of the late arriving wind for Course Race Officer Derek Hodd, the Gaffers, along with Classes Red 1 and 2, Green and Blue, with their mixes of Swans, one off classics, Contessa 26s, 8 metres, and many others, completed a mid-Solent race around the fixed marks today. Derek reported a steady F3-4 from the west enabling the shoreline classes to finish a race each.

Lawrence Wride grabbed his second win in Class Red 1 in the vintage One Tonner Sunmaid Vwith Polar Bear lying second after a 2nd and 3rd.  As with all the entries Sunmaid V was designed before 1974.

Polar Bear owner Douglas Peniston is no stranger to Cowes Classics Week having competed previously in his 1964 Folkboat.  A 1974 built ¾ tonner Polar Bear was abandoned during the 1979 Fastnet in the extreme conditions, with all crew saved, and later found washed up on the beach in Brixham.  She made a full recovery and several owners later, Douglas is now sailing her with “six friends in broad white hats who have all known each other since they were 14.”  He has only had the boat since December but says “We are competitive, racing hard, and enjoying it too.”

On the race circuit for the Bembridge One Designs, Loch Longs, and Squibs competitors were not so lucky.  On the course area to the east of Cowes at Peel Bank winds were very fluky with a local easterly taking advantage of the shelter from the land to compete with the dominant westerly.

Despite needing a longer postponement than the other classes, Course Race Officer Amanda Harding managed to get two windward leeward races in for each class.

Nine two-crew Squibs, representing a 1967 design, were on the start line making a special appearance for just one day only. Fiercely competitive, these boats of just six metres long are raced by top keelboat sailors like Etchells and Dragon Champions Graham and Julia Bailey who scooped first place in both races.

The Loch Longs, a number of which were designed and built in the 1930s and 1940s were also on the same course and again, one winner dominated both races, Jonathan Evans in Tantrum. The same went for Russ Fowler in Bembridge One Design BOD1 with his two wins.

Better conditions were experienced on the race course off Bramble Bank which hosted the Darings and the Solent Sunbeams.  “We had around 10 knots on the course with shifts between 10 and 15 degrees,” reported Peter Taylor, a former Chairman of Cowes Classics Week. Peter was sailing his Solent Sunbeam Betty and his performance today won him the day’s Red Funnel prize.  “We played the shifts, and managed to get ourselves into the right place for a win,” said Peter, for whom this is his first season in the boat.  “There were four boats in very close proximity at the finish.  It was a good day’s racing.”

The 13 Darings also raced close and furious.  A Cowes Class, the fleet knows the waters well, no more so than George Dibben in Streak, scoring first in both of the windward leeward races.

No one in the Solent could have missed the spectacle of the 46 XODs racing on their own course.  The wait for the wind paid off as they also fitted two races into the afternoon. A short first beat with the tide meant that there was little separation and much excitement at the first windward gate, but eventually there was a stunning win for David McGregor in X51 Athena who stretched out a lead to several hundred metres ahead of the next boat – a rare feat in such a large class. David and his crew arrived at the fist leeward gate with a narrow lead but chased the right sides of the final beat to extend their lead.

Race two benefitted from a longer first beat and a 50/50 divide to north and south around the two gate marks and was eventually won by James Meaning in Gleam.  There was disappointment however, for yesterday’s winner Henry Bagnall who broke his forestay on Fury and had to retire from racing.

The organising club, the Royal London Yacht Club, is supported by the Royal Ocean Racing Club, Royal Victoria Yacht Club, Cowes Corinthian Yacht Club and Island Sailing Club.  An important feature of Cowes Classics Week is the social program which aims to entertain the competitors together at different yacht club or cowes destinations. A new venue for this year was the newly opened Cowes Classic Boat Museum for drinks and street food which was highly successful. The famous RLYC tea parties are once again taking place every afternoon.