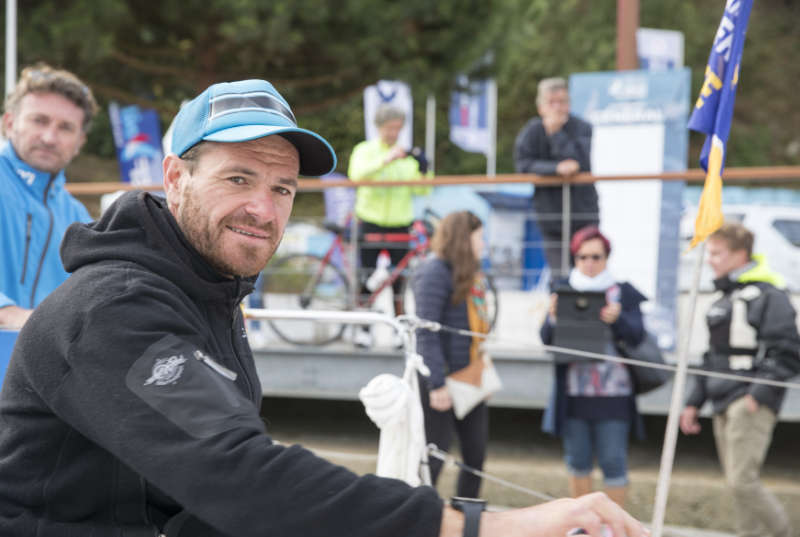 La Solitaire URGO Le Figaro Skippers Recuperate in Saint Brieuc before Sunday restart
With 35 La Solitaire URGO Figaro solo skippers arrived tired and – at best – half slept this morning in the otherwise sleepy, picture postcard haven of Saint Brieuc the big challenge now for the sailors is to maximise their rest, recovery and, later, their preparation for Sunday’s start of Stage 2, 520 nautical miles across the Bay of Biscay to Ria de Muros-Nia.

Around the compact dock basin and the Solitaire URGO Race Village locals and visitors are browsing the booths. As the famous annual race, a well known fixture on the French summer sporting calendar, visits Saint Brieuc for the first time, hopes of a fleeting encounter with a skipper will be in vain. Today’s typical skipper’s agenda is simple: get away from the boat sleep, eat, sleep, recover.

Boat work and repairs are ideally left to the highly skilled ‘preparateurs’, technicians who work through the skipper’s job list to ensure the near identical 32 foot one design Beneteau Figaros are back to 100 per cent for the next leg.

The one skipper who had not yet finished, 44-year-old Nathalie Criou, the Franco-American skipper called Race Direction at midday to say she is abandoning the first stage and was heading to Roscoff to rest. To have been given a finish time, in last place, the solo skipper of Richmond Yacht Club Foundation needed to cross the line before 23:29hrs this evening, which looked very unlikely given the light winds on the Channel in to Saint Quay-Portrieux. Her decision to retire actually slightly benefits the six other skippers who had to abandon Stage 1 – including England’s Nick Cherry (Redshift) and Ireland’s Thomas Dolan (Smurfit Kappa) – as the elapsed time they are allocated will be a nominal 3 days 21 hours 49 minutes, two hours more than the last finisher, Pierre-Louis Attwell who crossed the finish at 08:49.04hrs this morning.

A Complete Figaro Leg Recovered, the skippers will review a Stage 1 which proved to be a very complete Solitaire test, an intense, tight inshore circuit before leaving Le Havre last Sunday, a fast, super demanding spinnaker reach in a building 30kts across the channel, an upwind slog along the English coast in a diminishing breeze.

Strategy was tested through a messy high pressure ridge. There were several key wind shut downs in the breeze prompting significant regrouping. Five different skippers led at key times, there were several big comebacks – notably Charlie Dalin (Skipper Macif 2015) who came back from the dead twice to finish third, moving up through the fleet with impressive speed.
Favourites who finished disappointed included Alex Loison – winner this year of both the Solo Normandie and Solo Maître CoQ and Stage 1 winner in 2014 – who finished eighth and even Corentin Douguet, leader at Wolf Rock who dropped to 13th.

Loison, top title tip of many French insiders this year, said last night, “If they had told us we would have to go through all that for nothing… You start to wonder whether it is worth the pain. This leg will remain in the history books for many reasons. The conditions were extremely varied and we really got hit hard from the start. For the first Channel crossing, I’m pretty sure I’ve never experienced such conditions. After that a long tack upwind with the boat slamming and then, we end up with I don’t know how many boats within twenty minutes of each other.”

After 465 miles of racing since Sunday the top ten are separated from race leaders Anthony Marchand by just six minutes and five seconds, and the top twenty are within 12 minutes and 38 seconds. Considering the magnitude of gains and losses possibly on an open ocean Stage 2 to NW Spain these deltas are next to nothing.

The Big Sleep? There is both art and science to sleep and recovery, much of it down to personal preference. Usually there is a big catch up to start with. Former racer turned coach, program manager and consultant Marcus Hutchinson suggests, “In fact I am more of a believer in the shorter stopover because it is more of a continuous race and the sailors don’t lose the rhythm too much. We say maximise sleep, eat and then debrief. With the debrief we look at the race and take key points, not too many, then draw a line under the stage and never mention it again.” He observes, “I think we are looking forwards to the Figaro 3 (introduction of a new boat with foils) next year. Right now there are some top French guys who are amazingly quick, the best sailors are impressive how they can come back through the fleet.”

The two British sailors who finished in their personal best finishes, Alan Roberts (Seacat Services) in fifth and Hugh Brayshaw (KEMAT) should adhere to the same philosophy, analyse the strengths and weaknesses of their leg, go forwards with renewed confidence, but still draw a line under the leg.

For Brayshaw, at 25-years-old on his second La Solitaire, he has not yet had the benefit of a year-round French training programme such as Roberts has with the Pole Finistère where he lives, his seventh is key, but more important is knowing he had the speed to stay with the very top guys for hours on end under pressure.

“Alan knows exactly where he is going and how to get there. His French is fluent like a native, his home number starts with +33, he is integrated with the top, race winning French programme. He has been chosen to sail IMOCAs with Yann Eliès (three times La Solitaire winner, fourth in Vendée Globe 2016-17). He is totally at the top end of the game and wants to get to the top and win a Vendée Globe,” emphasizes Hutchinson.

This morning and today Roberts has been managing his recovery. His full spectrum approach, schooled in the science of marginal gains, has seen him improve the effectiveness of his sleep on and off the boat working with a hypnotherapist. Before the start in Le Havre he explained, “Outside of diet and nutrition I’ve also been working with a hypnotherapist following some alternative ideas. I wanted to be a bit more open he approached me and so we did some work. My aim is to be able to sleep better both on and off the boat. I was a bit sceptical but stayed open minded. We don’t really target one area, and I do think it helps more subconsciously all across the board. I see it more as a type of meditation. What it does is to help the body truly relax. If that can heal the body through being truly relaxed and I gain in some areas then it’s all good.”
“The aim with sleep is that it is such an important thing. I’ve been working to switch off at the most useful and effective time that you can when you’re on the boat.” He explains, “And it is also to sleep as best as you can when you’re on shore in order to be able to recover in between the legs”

“I definitely feel a lot better and whether it’s down to that or maybe just down to doing a huge amount sport and being very fit and strong at the moment or eating well its hard to really know.”

They said:
Corentin Douguet (NF Habitat) 13th after leading twice: “It isn’t so much the rankings that disappointment me as much as what happened towards the end. I had to go into the water at île Vierge to remove some weed from the keel. I was up with the frontrunners, Thierry (Chabagny), Charlie (Dalin) and Seb (Simon). I lost a little time, but I don’t know whether it was because I got my head in the cold water, but after that I was crap. I just couldn’t get anywhere. The time difference isn’t that much much, so I’m up there with the others and nothing has been decided. This leg could have been decisive, but it wasn’t to be like that. I’ll try to remember the first few hours of the race and forget the rest….”