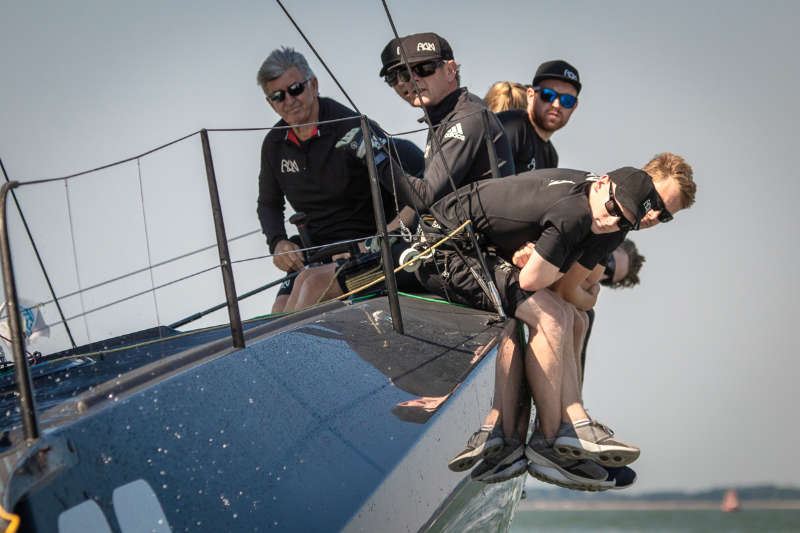 “A difficult day on the water with super twitchy wind.” commented Tokoloshe owner/driver Mike Bartholomew. “The breeze was full of holes and 30 degree wind shifts, and today you needed some luck, but we sailed the boat really well and we had good speed. We came into this event after a seven-day IRC European Championship, and we were much more match ready than we normally are. Today required super-hard concentration and it was very very hot, that’s the first time I have raced all day in the Solent just in a t-shirt and shorts.”

The nine-strong FAST40+ fleet enjoyed thrilling close racing, with seconds deciding the winners. The opening day of racing at the HYS FAST40+ National Championship was held in sweltering heat in the Central Solent with the air temperature nudging 30ºC. Two windward leeward races were completed, with the early northeasterly breeze producing light and shifty conditions. The breeze veered east during the day but failed to stabilise enough to run a third race.

Race Two was won by Elvis, crossing the finish line 38 seconds ahead of James Neville’s INO XXX. Girls on Film, driven by Anthony O’Leary was third, beating Hitchhiker to the line by just seven seconds. After IRC time correction, Zephyr and Tokoloshe were inseparable, tying for fifth place.
‘A good day for us – our first win! We are celebrating like Swedish Vikings do!” commented Elvis’ Calle Hennix. “It was super flukey all day, Race 1 was not so good and then Race 2 we took a chance and went hard left, which looked better due to the wind and tide, and it really paid off. We are a new team, still learning, and up against some teams that have sailed together for more than 10 years so we are happy – very happy.’

For up to date results:
https://yachtscoring.com/event_results_cumulative.cfm?eID=5950