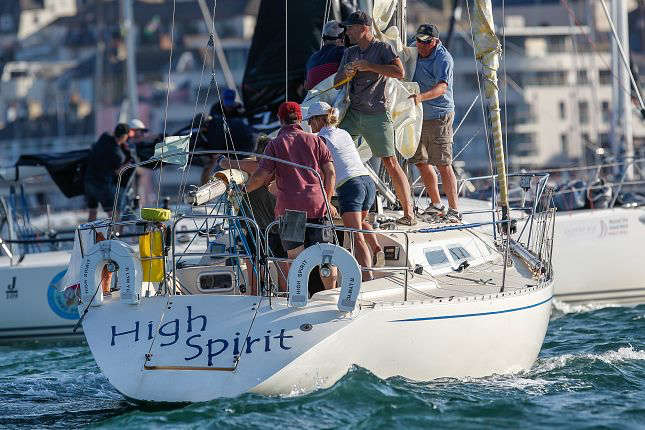 In what will probably be regarded as one of the most challenging on record, the 87th edition of the Round the Island Race in association with Cloudy Bay was won overall by High Potential.

Ross Applebey and his team, based in Lymington, sailed an impressive race in the light, tactical conditions and after 8:30:03 was deemed the overall winner of the Gold Roman Bowl on corrected time.

Commenting on his team’s win of the Gold Roman Bowl, an elated skipper said: “We are absolutely delighted with the result! It’s been an amazing day of sailing and, this year, everything we did seemed to turn to gold with things ultimately turning in our favour as we approached Ryde. We’ve had a great atmosphere on board all day with my wife, Sarah, and our good friends. After doing a dozen or so Round the Island Races in the past, and the last three of those in High Potential, we are so happy that our hard work has paid off.”

Ned Collier Wakefield, alongside Irvine Laidlaw, sailing aboard Tony Lawson’s MOD70 foiling trimaran Concise Fling, was fairly accurate in his prediction to record the slowest time for line honours. It may not be official but 8:34:09 (over six hours more than it took last year when they broke the multihull record) is definitely up for debate.

The general lack of wind and seabreeze that failed to materialise, left hundreds of teams struggling to reach the Needles before the tidal gate slammed shut in the early part of the race. Those who sneaked through had little option other than to soldier on and endure a slow, challenging, and extremely hot rounding.

The award for the first monohull to finish went to Tony Langley’s TP52 Gladiator who completed the course with an elapsed time of 8:56:47. Chatting after the race, Langley said: “It was the longest one I’ve ever done; nine hours on the helm which is plenty.

“There were three transitions, two round the back of the Island, and one on the eastern Solent. These transitions from one breeze to the other were the tricky ones; a knot or so of wind, so it was a case of just keeping the boat working to get through to the new breeze.”

Commenting on their efforts to catch Concise Fling on the final stretch to the finish line, Langley added: “We didn’t quite make it but we did have a moment when we thought we might do because they were in the transition for a lot longer.”

Mention should also be made of the winner of Raymarine Live Weather Briefing, prize draw. Paul French from the Westerly Regatta 290, Temptation was the lucky winner of the Raymarine Axiom 9 inch and the new AIS700 – total value £2,390.

For full results, click here. Prizes will be presented at the Round the Island Race prizegiving ceremony tomorrow (8 July) at Island Sailing Club.