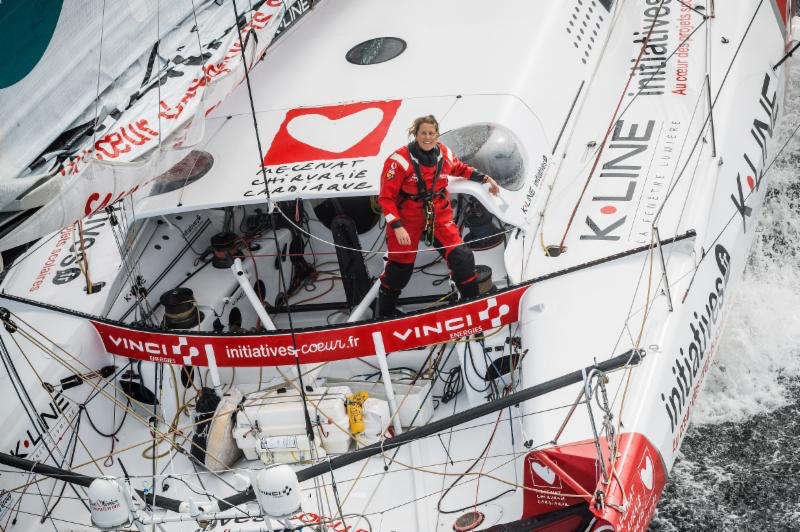 One of the largest fleets of IMOCA 60s ever gathered is due to set off on the Rolex Fastnet Race on Saturday, 3rd August. 29 of the boats, best known for their use in the Vendée Globe singlehanded non-stop round the world race, will assemble on the Cowes start line of the Royal Ocean Racing Club’s premier event to take part in the biennial voyage to Plymouth via the Fastnet Rock – 26 competing in the IMOCA class, another three in the main IRC fleet.

This line-up is the third biggest in IMOCA history, after the 2016-17 and 2008-09 Vendée Globes, and is due to the Rolex Fastnet Race being a qualifier for the next Vendée Globe.

“However,” adds Antoine Mermod, President of IMOCA, “the race means a lot and is important to French sailors because it is so historic. It also has a very nice course.”

The IMOCA class is also now under the microscope internationally after its selection as one of the two classes for the next Ocean Race (ex-Volvo Ocean Race).

Newer IMOCA 60s incorporate the latest foiling technology. This has transformed their performance, reducing displacement and drag thanks to their foils partly, or at times fully, elevating them from the water. Since the last Vendée Globe in 2016-17 when this technology featured on a few top boats, second generation foils are being fitted to the latest launches.

“At the best angle and boat speed the foils give a 15% jump in performance – it’s huge,” explains Mermod. “You sail at 13 knots and then when you start foiling the speed jumps to 18. You never do 15 knots!”

Eight new foilers are set to be on the start line of next year’s Vendée Globe. Two are currently entered in the Rolex Fastnet Race – Jérémie Beyou’s Charal, launched last year, and Sebastien Simon’s Arkea-Paprec, a brand new design from Juan Kouyoumdjian, launching this June. Simon, winner of last year’s La Solitaire URGO Le Figaro, will be sailing with 2004-05 Vendée Globe winner Vincent Riou, who also won the Rolex Fastnet Race in 2015 aboard PRB. (PRB is also competing, but with new skipper Kevin Escoffier, who sailed Dongfeng Racing Team to victory in the last Volvo Ocean Race, alongside Jérémie Beyou).

With the next Vendée Globe now 18 months away, many skippers have acquired boats that are new to them and are using this season to get acquainted.

Having sold their 2016-17 Vendée Globe winning IMOCA 60 to Louis Burton, Banque Populaire is back in the class having acquired the former MACIF/SMA, originally Francois Gabart’s 2012-13 Vendée Globe winner. For their latest programme they have recruited 29-year-old Clarisse Crémer, following her second place in the 2017 Mini-Transat La Boulangère’s Series class. On board for the Fastnet race with Crémer will be the team’s principal skipper, 2016-17 Vendée Globe winner Armel le Cleac’h, as he awaits the launch of his new replacement Ultime maxi-trimaran.

One of the most impressive aspects of the Rolex Fastnet Race’s mighty IMOCA line-up are the seven female skippers, three British. In addition to Sam Davies is former Mini sailor Pip Hare, who has acquired Superbigou, the boat on which Swiss skipper Bernard Stamm won the 2002-3 Around Alone and subsequent 2006-7 Velux 5 Oceans solo round the world races.

Miranda Merron makes a welcome return to the IMOCA 60 after a long tenure in the Class40 with her latest Campagne de France – the former Temenos/Great American IV. Of the Rolex Fastnet Race she says: “I have been around the Fastnet Rock countless times in the RORC’s races or otherwise, but it is still the same mythical place with the amazing lighthouse. It is always a pleasure to round it.” She is racing with her partner and IMOCA coach, French offshore sailing legend Halvard Mabire.

While it is not yet as internationally diverse as the Class40, still ten different countries are represented including two from Scandinavia: Norway’s Oliver Korte on Galactic Viking (ex-Solidaire) in the IRC fleet and Finland’s Ari Huusela on Ariel 2 (previously Dee Caffari’s Aviva/GAES).

Eleven of the last Vendée Globe’s 29 skippers (albeit only five finishers) will be racing in this year’s Rolex Fastnet Race. Since that race several have graduated up: Swiss skipper Alan Roura (who sailed Pip Hare’s boat to 12th place) now has Marc Guillemot’s Safran while French skipper Fabrice Amedeo, who came home 11th, has acquired Pieter Heerema’s No Way Back, a first generation foiler from the last race, rechristened Newrest – Art & Fenêtres.

As a genre IMOCA 60s date back to the early 1980s when it evolved in singlehanded oceanic races such as the BOC Challenge and OSTAR, however their development accelerated once they were adopted for the first Vendée Globe in 1989. A piece of IMOCA history is taking part in this year’s Rolex Fastnet Race in the IRC fleet, with Jean-Marie Patier’s Le Cigare Rouge, the narrow lightweight yawl that was runner-up in the second Vendée Globe in the hands of Jean-Luc van den Heede, winner of the recent Golden Globe Race.

Several boats are entered from the 2000 Vendée Globe, the race in which Dame Ellen MacArthur memorably fought Michel Desjoyeaux for the lead all the way up the Atlantic. Most notable of these is Alexia Barrier’s 4myplanet, which in the hands of original owner Catherine Chabaud, won the Fastnet Challenge Cup outright under handicap 20 years ago.
For more information go to the Rolex Fastnet Race minisite:
http://www.rolexfastnetrace.com/