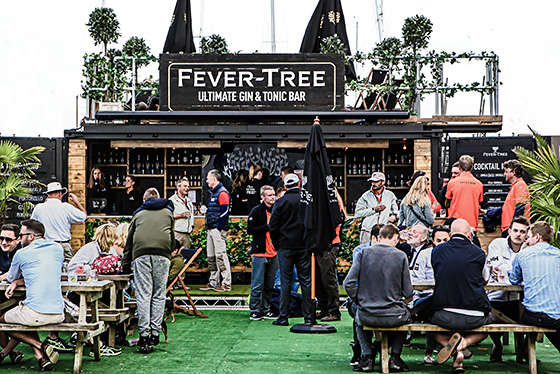 Cowes Week Ltd, organisers of the prestigious sailing regatta and highlight of the British Sporting Summer, are delighted to announce that Fever-Tree, the world’s leading premium mixer brand, have renewed their position as Official Mixers Sponsor for a further two-year period.

Fever-Tree have fast gained popularity within the international sailing community since their iconic bar activation and perfectly served drinks began delighting both sailors and spectators alike at Cowes Week in 2013 and this further two-year Official Sponsorship of the regatta provides both brands with the opportunity to continue to build their relationship.

Tonic of choice in the world’s best bars, Fever-Tree recently launched Refreshingly Light, the ultimate low-calorie mixer range, following the success of their light tonic water. The new range will be available on the Fever-Tree bar at Lendy Cowes Week, perfectly paired with a selection of gins and other dark spirits.

Fever-Tree’s planned activation at Lendy Cowes Week 2018 includes their Ultimate G&T Bar, sited in Cowes Yacht Haven, as well as G&T boat-drops. New for this year, Fever-Tree will support an Official Party, the Fever-Tree Crew Cap Party, to be held at Shepards Marina on the Thursday 9th August. Fever-Tree will also feature a range of gins on their event menu, alongside Official Rum Sponsor, Westerhall.

Commenting on the announcement, CWL’s Commercial & Marketing Director, Kate Johnson, said: “We’re delighted to welcome Fever-Tree back to Lendy Cowes Week for a further two years. The regatta is a staple of the British Summer Season and we believe perfectly lines up with Fever-Tree’s values as a premium brand. Fever-Tree is enormously popular with competitors and spectators alike and promises to be once again a very well received addition to the regatta.”

Saskia Meyer, Marketing Director at Fever-Tree added “We’re excited to be returning to Lendy Cowes Week for a fifth year, bringing our Fever-Tree bar to the Yacht Haven and hosting the Fever-Tree Crew Cap Party for the first time at Shepard’s Marina. Lendy Cowes Week is a fantastic event and a key date in the UK’s sporting calendar – we’re proud to be associated with it for another two years.”