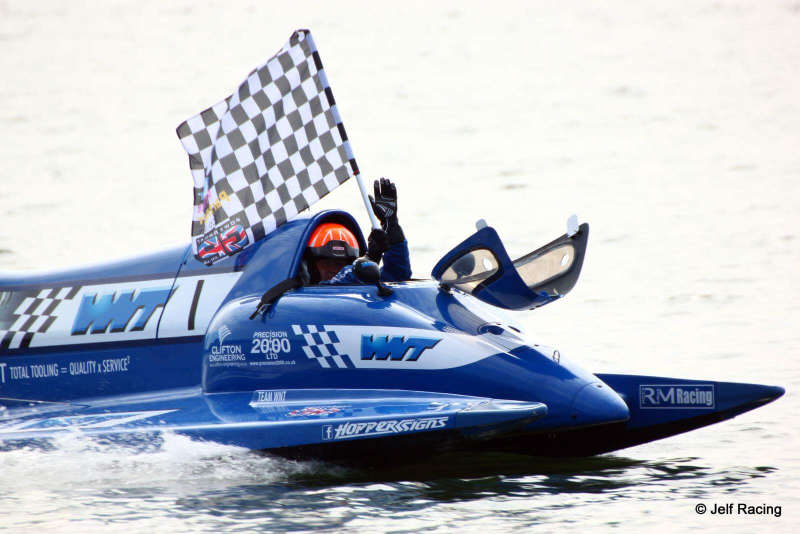 Temperatures were scorching and so was the on water action as Kent based Powerboat Racing Team Jelf Racing headed to Bedford last weekend (4/5 August) for the 2018 Powerboat GP RYA British Sprint  Championships. With team racers competing in four of the seven championship classes the team had their work cut out to make it onto the podiums but managed to secure 2 Gold Medals, 2 Silver, and a hard fought 4th place amongst our drivers.

First in action was our young speed demon George Elmore looking to defend his 2017 Sprint title in the GT15 Class. He quickly got down to business and despite a strong performance from his fellow junior racers he claimed pole position with a second and half lead over his closest rival Oban Duncan.

Despite claiming pole position Oban was not going to make the weekend’s racing easy for George and quickly the two youngsters went head to head in what would unfold as one of the biggest battles of the weekend. Each racer would compete in four heats over the weekend with the best 3 results to count and George and Oban launched themselves into a battle of epic proportions not giving each other an inch of movement for error.

Oban took wins in heats 1 and 2 but with a new day dawning and the opportunity to adapt his racing style George returned the pressure in the third heat. In a manoeuvre of complete precision he spotted his opportunity and squeezed past to take the third heat win and ensuring another head to head battle in the final heat to see who would claim the crown. Oban got a phenomenal start but George sat on her wake the whole way trying to squeeze past at every opportunity throughout the edge of the seat race that nearly went to a photo finish that saw Oban steal the win and championship along with and George secure a very proud silver medal.

Next in action was T850 Driver Nigel Edwards amongst a  small but very experienced fleet of drivers Nigel new he had his work cut out If he was going to finish in a podium position and bring home some silverware for the team. Hours of extra dedication had gone in before the event looking for the extra speed required. Qualifying in 4th Nigel knew he’d have his work cut out in the four heats to follow but always ready for the challenge he got ready for the fight.

Mark Williams put in a flawless performance to see him claim the championship title. Leaving Nigel to battle it out with Bill Owen and Steve Cash for the final podium positions. 4th in the first heat Nigel had a fight on his hands, but a couple of minor adjustments saw him secure second place in heats 2&3 and well on the way to a podium finish. 4th place in heat 4 saw Nigel and Steve Cash tied on points for second meaning the results would be counted back to see which racer had the best race time over the four heats. As calculations were done by the timing team Nigel Edwards secured the silver podium step after a hard fought weekend of racing.

Next up saw Ben Jelf and Sam Coleman go head to head in the F4 class. Ben quickly got down to work using his knowledge of the course and recent sessions abroad to set pole position over a second and a half ahead of his quickest rival with Sam put in a strong performance qualifying in 5th place.

From pole position and in sweltering conditions Ben turned up the pressure on his fellow racers. Manoeuvring his way around the course he made it looked effortless as he fought his way to four clean heat wins and his 14th British Championship title as he was declared 2018 RYA F4 British Sprint Champion.

Sam fought hard amongst the following fleet trying to make his way through the pack and entering into some close action with Leon King to battle it out for the 4th place in the championship with both drivers pushing each other hard. As the results came in Sam had done enough to secure 4th in his first season in the class and a thirst to improve and fight his way into the podium at the next British Championship Round.

The final class in action for the team was the F2 Catamarans were Team Manager was looking to add yet another Championship title to his extensive collection. In qualifying just 0.80 of a second separated the top two boats in the championship campaign with Colin Jelf’s formidable foe of Steve Hoult just pipping the reigning British Champion to the pole position.

Colin had a battle ahead of him if he was to claim the 2018 F2 Sprint championship and Hoult certainly wasn’t going to give it up with out a fight. As the lights went out for the first heat Jelf and Hoult powered their way into the first turn practically neck and neck but as the spray settled Hoult had the edge and managed to take advantage of the clean water to put space between himself and Jelf. The race would see the team’s complete 12 laps of the course and as they made their way around lap by lap Colin increased the pressure until disaster for Hoult as his dislodged a turn buoy and saw himself docked a lap. Jelf took the opportunity to ease off the throttle and perfect his corners round the course for the following fight in the next three heats.

From pole position in heat 2 Jelf was untouchable once out in front he kept water between himself and Hoult and cruised home to a second heat win and we’ll on his way to the championship title. One more heat win would see Jelf take the Sprint championship but with the four heats also counting towards the British Season Championship Jelf was not set to ease off the speed. Another clean heat win followed by a 4th despite immense pressure from Steve Hoult saw Colin Jelf claim the 2018 RYA F2 British Sprint Championship and extend his lead in the British Championship.

On a fantastic weekend’s racing from the whole team the newly crowned F2 Champion and Team Manager Colin Jelf had this to say;

“I’m so proud of every member of the team and their performances over the weekend and the achievements we’ve walked away with. George fought so hard to try to beat Oban and showed some real skill and determination out on the water, he’s disappointed with his silver but the whole team are so proud of the way he conducted himself and gave his all this weekend. Nigel’s result was so well deserved he puts in so much effort at every event not just into his racing but into helping the whole team and it’s nice to see that effort rewarded with a silver medal.”

He continued “Sam’s learning and improving with every lap of every race and he’s taking on board the information so it won’t be long til he’s on the podium where he belongs. Ben’s done a lot of miles over the last few months racing at every opportunity to help improve his racing in different conditions and I couldn’t be prouder of him this weekend despite the heat and pressure he kept a cool, and calm head and just took it all in his stride. I have to thank the whole team and our sponsors for their help with every team member but also in helping me secure another championship title it was hard work for everyone this weekend especially for me but a good team and sponsors always makes it just that little bit easier.”