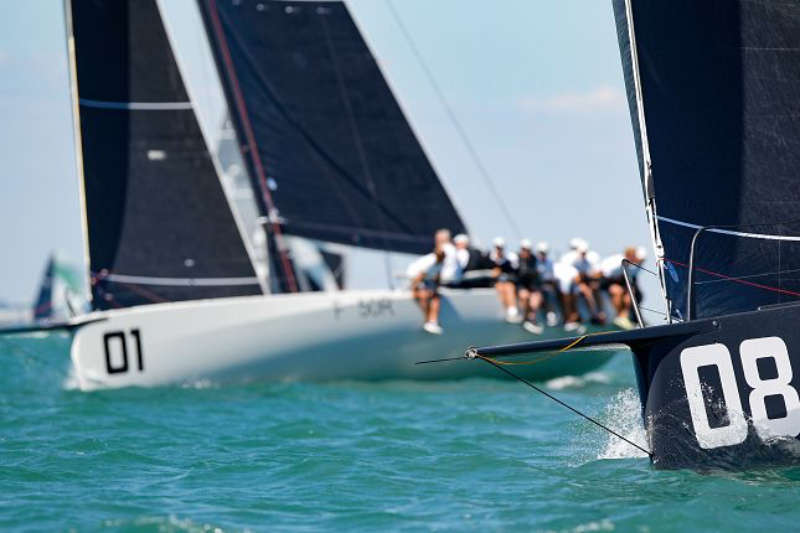 The second day of Lendy Cowes Week delivered fantastic conditions for the FAST40+ Class. An easterly breeze held out for the duration of the day, and with a sea state enhanced by wind over tide mixed with tropical temperatures, the Solent was the perfect playground. PRO Stuart Childerley go the fleet away on time for two textbook windward leeward races, and a round the cans race finishing on the Royal Yacht Squadron Line, which put the icing on the cake. After four races in the series, Girls on Film leads the FAST40+ Class by just two points from Rán VII, with Hitchhiker in third.

“Really good racing today, with a square line and a good course, and that is so important.” emphasised Girls on Film’s Peter Morton. “We got a glam. start in the first race, which puts us in a good position to hold off the competition. The second start was not as good, however we got a second place, and consistency is very important in this fleet; one mistake and you can be at the back of the fleet in a heartbeat. We know Rán is a great boat with a great team, and in the last race she lifted up her skirts and was off. But we are happy with our boat speed and our position in the regatta, we have a slender lead.”

Tony Dickin, owner driver of Jubilee, joined the FAST40+ Class in 2016, having enjoyed tremendous success in the one design J/109 Class. “It’s been a big step up, we went right in at the deep end, but we are getting there, and if you want to get better you have to compete with the best. FAST40+ racing is the best you can get in the UK. Today we got a good start in the first race, and although we couldn’t catch Morty, we held off some extremely well sailed teams. The Jubilee team has been absolutely fantastic. We are working really hard and learning as we go.”

Stay up to date with all the action through the FAST40+ Class Facebook page: https://www.facebook.com/FAST40UK/ and the official web site:www.fast40class.com