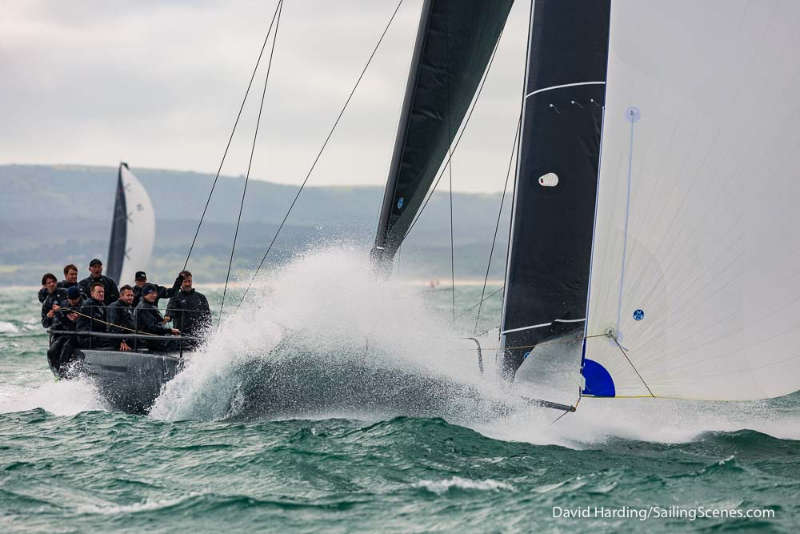 FAST 40+ – Exhilarating conditions for day one

FAST 40+ – Exhilarating conditions for day one

There were thrills and spills on the first day of racing for Round 2 Fast 40+ Class Race Circuit, hosted by the Royal Motor Yacht Club. Poole Bay delivered exhilarating conditions for three windward leeward races held in 17-20 knots of solid pressure from the southwest.

“We have had light conditions for the early part of the season, so we haven’t had wind like that training, let alone racing,” commented Rán’s Irish pitman Justin Slattery. “Going the right way is always a winning move, but when the breeze is up, boat handling becomes very important. We were by no means perfect today, but we didn’t make any big mistakes.”

“In general our starts went well today, and we did have a couple of opportunities to get the better of Rán but didn’t convert them.” commented Girls on Film’s Ian Moore. “The courses were well set with the fleet split going up the beat. Most of the teams tended to choose the south side for the downwind leg, because in those conditions it meant one less gybe. The forecast is for similar conditions tomorrow.”

There was high drama in Race Two, with Mike Bartholomew’s South African flagged Tokoloshe II suffering a dismast with the rig snapping on the first downwind leg. Thankfully none of the crew were injured, but sadly for the Tokoloshe team, it would seem their regatta is over. British skipper Tony Dickin racing Jubilee, started well with a second place in Race One, but a steering breakdown during Race Two, led to retirement from racing for the day.

“We got a great start in the first race, and sailed well to get a good result, plus we were having a lot of fun. So it was a bit frustrating to have suffered the problem,” commented Jubilee’s Tony Dickin. “But we are all sorted, we will be out racing tomorrow, and we are very much looking forward to a full day of racing.”

After racing, there were plenty of banter on the dock at Poole Town Quay. Crew enjoyed complimentary Tangle Foot Ale, courtesy of Dorset brewer Hall and Woodhouse. Racing continues tomorrow for the FAST 40+ Class with the intention of three more windward leeward races in Poole Bay.

Stay up to date with all the action through the FAST 40+ Class Facebook page: https://www.facebook.com/FAST40UK/ and instagram: #fast40class.
Official web site:www.fast40class.com