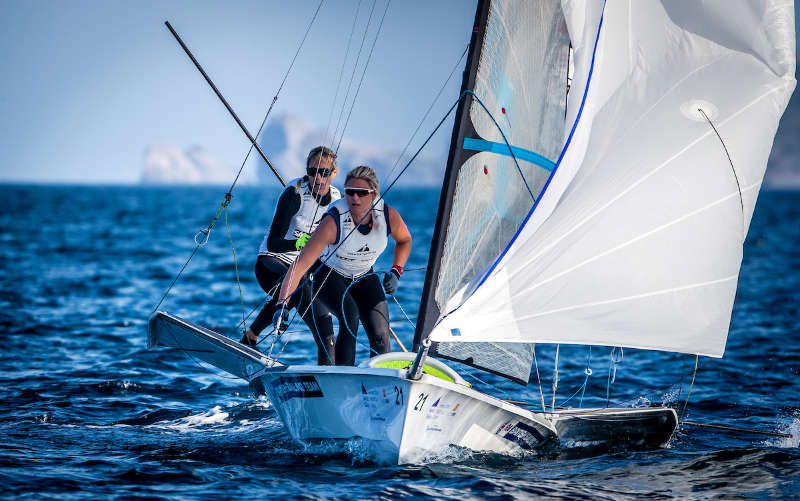 It was another day of playing the waiting game for wind for the British Sailing Team at the World Cup Series in Hyeres, France.

When the breeze finally came late in the afternoon it was the 49erFX duo Charlotte Dobson and Saskia Tidey who caught the eye with a dominant day-three display.

After a long wait ashore, Dobson and Tidey flew out of the blocks with a bullet then followed up with a third place.

Crucially the results shoot the pair up the leaderboard into 13th in the 39-boat fleet with one more day of fleet racing remaining to break into the top ten and the medal race.

“We’ve had a pretty tough two days here,” said Tidey, “so today was one of those times to just go out and really grab hold of an opportunity where you saw it.”

Hyères has offered up the pair a chance to try out some new things ahead of the Sailing World Championships in Aarhus, Denmark, later in the year and it all seemed to come good on day three.

“We are at the point in the season where we are still trialling and testing new techniques so today was a different approach from us, learning from our mistakes from the first few days and really be clear on our priorities out on the race course,” added Tidey, 24, from Portland, Dorset.

“We had a clear vision of where we needed to be on the boat and where our weight needed to be aligned in the conditions to help us move fast.”

The British Sailing Team’s Laser Standard and Laser Radial rising stars continued their form in Hyèresas Lorenzo Chiavarini moved in to second place overall while Georgina Povall sits fifth with an impressive second place finish in the final race of the day.

Ben Saxton and Nicola Boniface extended their run of form in the Nacra 17 claiming a bullet in the second race.

Nacra 17 team mates John Gimson and Anna Burnet scored two fifth place finishes from the first two races to take them inside the top ten in the overall standings.

Meanwhile Cardiff’s Rio 2016 gold medallist Hannah Mills and crew Eilidh McIntyre move up from fifth to third in the women’s 470 with a fifth and 11th.

In the solitary race of the day for the 49ers Chris Taylor and Sam Batten finished seventh while Dylan Fletcher and Stuart Bithell scored a 13th and James Peters and Rhos Hawes came 25th.

Day four in Hyères is scheduled to begin at 1100 local time (0900 GMT) on Friday 27 April as the British Sailing Team hunt for medals continues.

Full results are available on the Manage2Sail website on behalf of World Sailing.