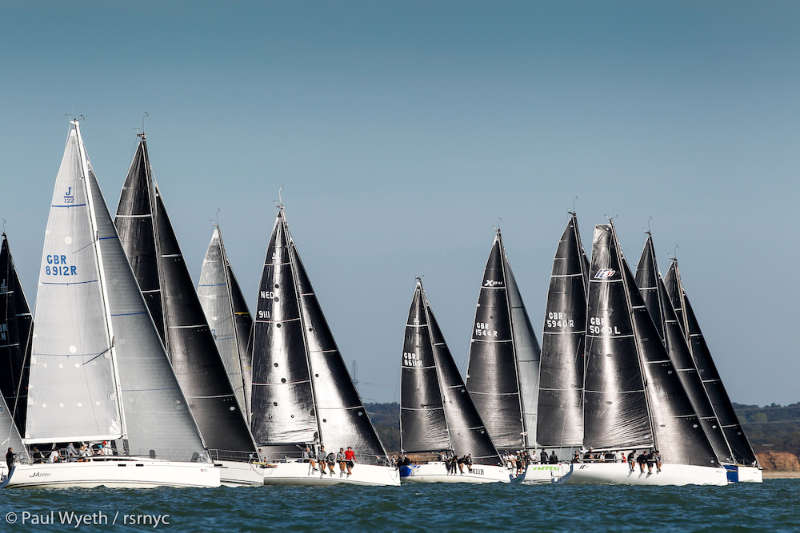 The First day of the Land Union September Regatta was bathed in glorious sunshine and a light southeasterly wind averaging seven knots. PRO Peter Bateson and his race team organised a full quota of racing in the Eastern Solent, with up to four races for the impressive fleet . Over 300 sailors were reaching for their sun cream rather than their oilskins, counting their blessings in superb Indian Summer conditions.

“It’s all about racing with your friends and having a good time,” commented Spider Pig’s Rob McLean. “I raced professionally all over the world on big boats which was great, but it is lovely to be sailing on the Solent with your mates in good competition, because you learn so much more. For the crew on Spider Pig it is really about going out and having a bit of fun, sailing competitively, and trying to win.”

“Club Class is a lot of fun,” commented Ayaya’s Matthew Richardson. “Boats that don’t have an IRC rating can come and race with their mates. I often race with family and friends but today we were double-handed because all our mates were on other boats. I have a big list of people that I contact to come and race in Club Class and when the weather is like it was today, it is absolutely fantastic.”

One of the legends of sailing was on the water today, Brian Thompson has racked up 25 world sailing records including winning the Jules Verne Trophy and racing solo-around the world four times. On behalf of regatta supporter Doyle Sails, Brian Thompson delivered a racing debrief with pictures and videos from today’s action, and offering friendly and expert advice to a large and captivated audience.

“Getting away well off the start line is always important and especially in light airs and with over 50 boats on the course, finding clear air and keeping the boat powered up in manoeuvres was also big factors today,” commented Brian Thompson. “The standard of racing was very good amongst the leading boats in the Performance 40 Class. It was also great to see so many sailors enjoying the racing. Passion is so important, you don’t always win a race, but if you enjoy the sport and keep learning, the results will come and the fun will remain.”

After the Doyle Sails debrief the daily prize giving was followed by complimentary German beer and BBQ courtesy of Land Union, and English Harbour Rum cocktails. Live music from Steve Masters and ‘The Focs’ got the party rocking into the night.