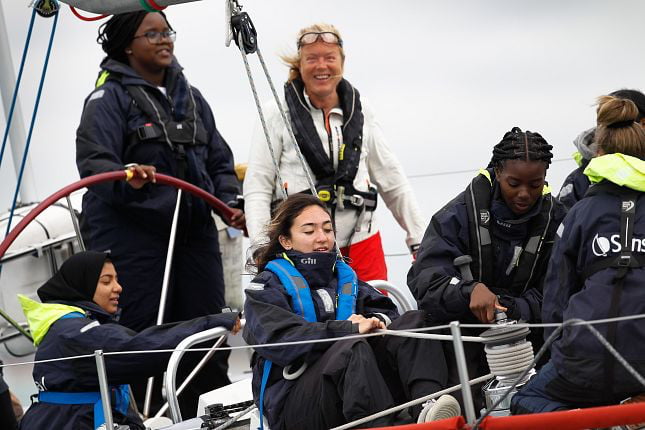 Cowes Week Daily Round Up Day 3

Cowes Week Daily Round Up Day 3

A change in the weather, with shifty east and south-easterly breezes replacing the westerlies of the first two days, saw new boats coming to the fore in many fleets today.

Winds were strongly influenced by a small slow-moving secondary low pressure system sat over Sandown Bay. In the eastern Solent there was more breeze than initially forecast, but it was shifting through an arc of 40 degrees. Graham Sunderland, navigator of David Franks’ J/112E Leon in IRC Class 2 said:

“The rain radar was a really useful tool today: in the occasional patches of rain the wind was stronger and shifted to the right. There were lots of opportunities here, as the shifts were so big, but it was hard to spot them as they weren’t accompanied by the usual pattern of clouds.”

In the Etchells class Nick Stag’s China White won his first race of the series. In a fleet that’s well known for extremely tight racing, he pulled out a two and a half minute lead on Anthony Parke’s Sumo. Further down this fleet racing was still characteristically tight, with places three to six decided by a total of just 80 seconds.

Equally, newcomers to the Dragon class, Michael and Helen Wilson’s Christiania, spent a good chunk of the second half of today’s race in the lead. However, she slipped back to finish a close third, just 11 seconds behind Eric Williams’ second-placed Ecstatic. The newly restored Bluebottle, sailed by Graham and Julia Bailey and David Heritage, won her third consecutive race, but by a much smaller margin of only 19 seconds.

Big wind shifts, especially in the eastern Solent provided plenty of challenges for competitors, while also offering opportunities to make gains. Today most inshore racing tests a subset of sailing skills on very specific course layouts, but Cowes Week’s fixed start lines and longer races require a wide variety of skills, in much the same way as offshore racing.

Today there was also a focus on the regatta’s official charity, the Scaramouche Sailing Trust. This exists – against the odds – to give students at inner London secondary school Greig City Academy life changing opportunities. They have five boats competing all week, ranging from a trio of 22-footers to the 45ft Scaramouche, which is racing this week with an all-girl crew.

Competitors can help the Trust continue its work in 2022 by donating to the fund-raising campaign here: https://www.justgiving.com/campaign/scaramouche2022

Today the shifty east to east southerly breeze varied in strength from 8 knots close to the Island shore in the west Solent to 16-18 knots in parts of the east Solent. The White Group dayboats had a tactically challenging downwind start from the Royal Yacht Squadron line.

The Etchells class grouped around the mid-line position, heading towards the outer distance mark with 30 seconds to go. Nick Stag’s China White was first to hoist and fill their spinnaker 10 seconds before the gun, but lacked speed compared to the boats around them, including Rob Goddard’s Rocketman and Anthony Parke’s Sumo, who gained an early three length advantage.

However, after a downwind start this gives a much smaller benefit than for a conventional upwind start, creating a tense and tactical dynamic. China White chose a perfect spot to gybe onto port, pulling into second place on the windward hip of Sumo.

Stag then moved into the lead at the first mark. “Our mark rounding wasn’t perfect,” he said, “but it was good enough to get inside the lead boat at the mark, then tacked away.” On that first beat, across the west Solent to Hamstead Ledge, they pulled out a 4-500 metre lead and then held it as the wind increased as they headed back towards the central Solent. Sumo took second place, 37 seconds ahead of Rocketman in third place.

The Squib fleet also saw a shake up among the leaders. Malc Hutchings and Andy Ramsey’s Lady Penelope had been leading the class by a comfortable margin after scoring third and first places in the opening races. However, they lost half a dozen places on the shifty and patchy final beat today and finished 11th. By contrast, David Wines and Keith Davies’ White Magic gained four places on that leg, “just by staying in a higher mode than other boats,” according to Davies.

Chris Rust’s Artemis 2 put in a very solid performance right round the course to take his first victory of the week, ahead of Jono Brown’s Squiggle and Joe Henry’s Bacchante Vll.

James Wilson and Edmund Peel’s Quail, mostly sailing on alternate days, are again dominating the Redwing class. However, they are being pushed hard by John Raymond and Matt Alexander in Harlequin.

In today’s race around half this big fleet aimed for the outer end of the start line. However, no-one emerged from this pack in a strong position. Instead the boats in cleaner air a little closer to the shore gained an advantage, including Quail, Tony Barlow’s Fortuna and Heather Culpan’s Snowgoose.

In a closely-fought battle Quail again emerged victorious, but only 8 seconds ahead of Harlequin. Annie, Joe and Bel Robertson’s Red Gauntlet ll took third place just 12 seconds later. The racing was equally tight further down the fleet, where two groups of three boats crossed the line just 9 and 12 seconds apart.

Immediately before their start, almost all competitors in the XOD fleet were heading north on starboard gybe towards the outer end of the line. They hoisted spinnakers 15-20 seconds before the gun, then gybed onto port to head for their first mark in a manoeuvre that demanded split-second timing.

Four boats were premature in this, a costly mistake in such a competitive class. Only one of these – Fraser Graham and Tim Copsey’s Astralita – responded to the recall signal. Penny Fulford’s Madeline was among those who timed the start to perfection and she soon pulled ahead into a marginal lead a little inshore of the majority of the fleet.

By the finish Fulford had extended to a more commanding lead, a full minute and a half ahead of Jeremy Baker’s Clair de Lune, while Al Ashford’s Foxglove took third 32 seconds later. Despite having to return at the start, Astralita pulled up to a very creditable seventh place at the finish.

IRC Class 7 may consist of the lowest-rated yachts, but the racing is just as hotly contested as that for the larger boats. This year the fleet includes eight Sonatas, which are reforming as a low-cost but very competitive fleet, plus Olympic bronze medallist Jo Richards in his H-Boat Woof, and Chris and Victoria Preston’s wonderful 97-year-old West Solent One Design Suvretta.

Competitors can help the Scaramouche Trust continue its work in 2022 by donating to the fund-raising campaign here: https://www.justgiving.com/campaign/scaramouche2022