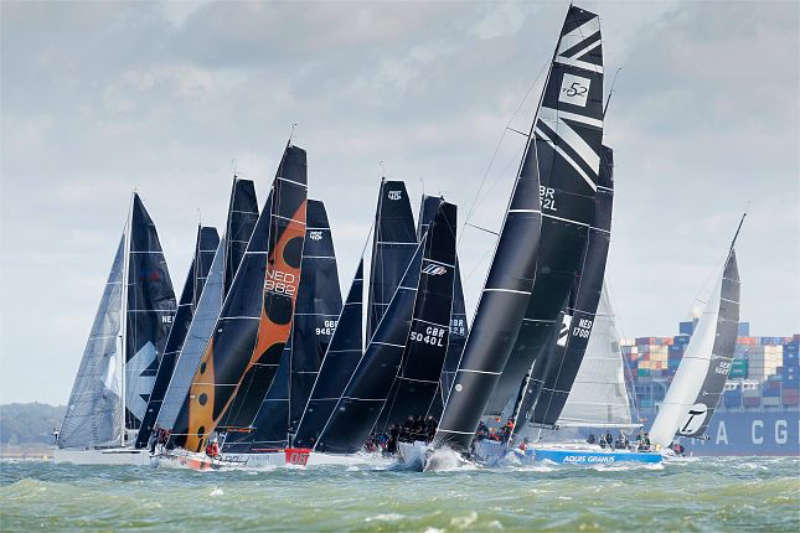 Today provided yet more high-adrenaline racing at Cowes Week that saw many competitors coming ashore sporting big grins. While it was a warm and mostly sunny day on land, it was a breezy one on the Solent, with powerful gusts to 25 knots that provided exhilaration at the same time as forcing a string of retirements.

Among these was the classic Nicholson 39 Conteza, competing in Cruiser Division C, that broke its rig close to the Thorn Channel. Andrew Haining’s Rustler 33 Flute, also broke her mast and was seen motoring into Cowes with the three sections of the spar impressively neatly lashed on deck. Will Heritage’s Flying 15 Freddie Flintoff, which had been leading the class with an unbroken run of race wins, also suffered the same fate.

Less thermal enhancement than predicted meant the wind was not dragged as far round to the west southwest as initially predicted. On shore spectators were treated to the classic Cowes Week spectacle of yachts running deep downwind to the finish in a difficult wind against tide chop.

The Quarter Ton class is renowned for thrills and spills in stronger winds. Today Sir Keith Mills’ Cote led around much of the course, challenged initially by Oscar Strugstad’s Dawn Raid, before the latter broke the spinnaker pole in a broach.

By the final beat Cote, Sam Laidlaw’s BLT and Julian Metherell’s Bullit were all in close contention, with BLT rounding the last mark just ahead of Bullit. The final leg was a long tight broad reach under spinnaker, from Elephant racing mark off the Island shore in the western Solent to the Royal Yacht Squadron finish line. Bullit rolled past BLT off Gurnard and went on to take the winner’s cannon 17 seconds ahead of Laidlaw’s marginally lower rated boat.

“We had a fabulous day – the broad reach to the finish against BLT was fantastic,” says Metherell. “At first we thought we would have to drop the kite to get to round Quarry Ledge, but there was a lull to 23 knots so Paul [Blowers] got me to head up.” With the mainsheet right out and the kicker eased they weathered the rocks and stayed ahead to the finish.

“BLT has sailed brilliantly all week,” added Metherell, “so it was nice to have a chance to blemish their record. The race committee also deserve congratulations for getting us out on such good courses in difficult weather – they’ve done a great job.”

The new GRP Classics class may have a small number of entries this year, but it has attracted some very experienced crews, all of whom started the regatta hoping they had boats with bandit handicaps. The result has been a week of competitive racing with tight results in which podium places were decided by only a couple of minutes and the top three boats were tied on points at the start of today’s racing.

Stephen Brookson’s Swan 411 Kiswala again took line honours. However, she was not able to save her time on the pair of She 31s, also designed by Sparkman and Stephens. Tom and Matthew Richardson’s Arctic Skua notched up her first victory of the week on corrected time, ahead of Leon Clifton and Stuart Greenfield’s Sheba.

“This is the first time the GRP Classics have raced here as a fleet and it really is fantastic racing,” said Tom Richardson. “We’ve been having a great battle with Sheba, the other She 31, and I’m really enjoying sailing with my son, grandson and brother Simon who built the sails.”

Squibs may have small spinnakers, but they are lighter boats than many of the other traditional dayboats that race at Cowes Week. Combined with a shorter fin keel and separate rudder they can be surprisingly quick surfing downwind in a good breeze. Today they shot east from the start, with Chris Rust and James Vineer’s Artemis 2 initially leading ahead of Peter Eddis’ Scarab 2. However, the latter then joined Rob Tarboton’s Zip in responding to the individual recall.

Today saw a shake up at the front end of the XOD class. The original intention had been to start the fleet to the west, with a two-mile beat to East Lepe, which would separate the fleet enough for boats to be spaced out on the rounding, but the sea state in the strengthening west-going stream prevented this.

This competitive fleet mostly had spinnakers set at the gun, with James Markby’s Xpeditious well placed inshore, while David McGregor’s Athena and Cordelia Ellis’s Myrtle were both doing well mid-line. Paul Woodman’s Ibex led the fleet at the finish of today’s first race, 13 seconds ahead of William McNeill and Andrew Tredae’s Lara. Simon Russell’s Swallow scored his worst result of the week so far – a third place.

However, worse was to come for Russell in the next race, in which he finished 10th. John Tremlett’s Lass returned to form for this one, taking first place 14 seconds ahead of Andy Oddie’s Magic Dragon, while Xpeditious took third just two seconds later. Despite her relatively poor result in this race Swallow continues to lead the series, with a total of 17 points. Lass is second overall with 32 and Ibex third with 35.