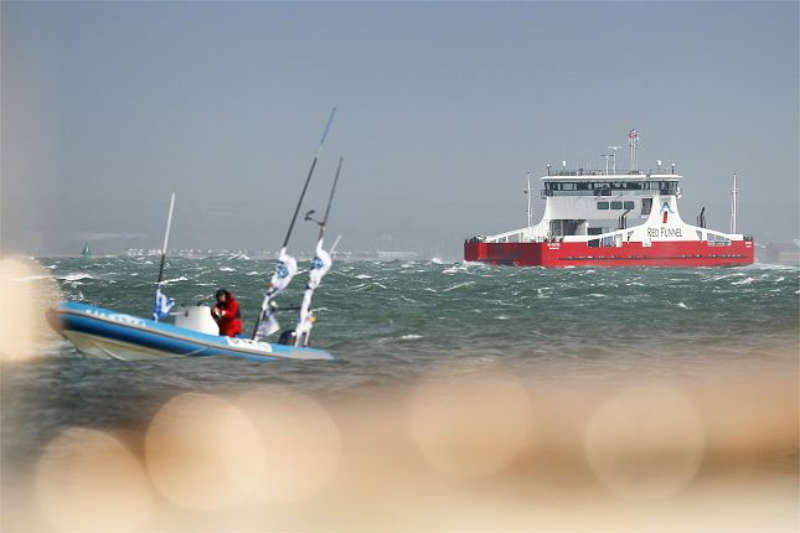 Winds of up to 50 knots meant the Solent was almost eerily empty today, devoid of the nearly 700 raceboats entered in Cowes Week, the plethora of cruising yachts normally found on an August weekend, and even the Red Jet fast ferries.

With the weather models all aligned by the middle of the week, the decision to abandon racing on the opening day of Cowes Week was made three days in advance for dayboats and the following day for the larger yachts.

“The quality of modern weather forecasting is so good we were able to make an early decision to help competitors,” says Regatta Director Laurence Mead. “We had a meeting with Fiona Campbell, the regatta’s meteorologist, on Wednesday who was already able to predict gusts of 45 knots with 95 per cent certainty.

“Whenever we can we make use of the best of modern technology in Cowes Week and it was easy to make a competitor-friendly decision well in advance – this was a different scenario to borderline conditions where a call has to be made on the day,” adds Mead. “We also didn’t want dayboats slogging over to Cowes in the big winds yesterday and today, so delayed White Group starts by two hours tomorrow.”

While it’s not unusual to have an impromptu lay day during Cowes Week, due to either calm weather or too much wind, missing the opening day is exceptional. However, for the remainder of the regatta the weather promises to give top-notch racing in a range of challenging and exhilarating conditions.

Winds will moderate slowly overnight, dropping to 16-25 knots by Sunday morning, although there is considerable differences between models. It’s then predicted to reduce to 8-14 knots on Monday, before increasing to 16-24 in a weaker low pressure system mid-week. Although low pressure systems are dominant, it will be warm with plenty of sun and only isolated showers.

Today teams have spent the day refining their race preparations and analysing their key competition, whether old adversaries or talented newcomers to their class. “We’re looking forward to it all,” says David Franks, who is racing his J/112E Leon this year and has notched up five overall wins in IRC classes 4 and 5 in the past seven years. “This year there are four other very good J/112Es in IRC Class 4 – all very good teams. Bruce Huber is a key competitor in Xanaboo, Devanti Tyres (skippered by Marie-Claude Heys) always gets good results and James Chalmers’ Happy Daize is strong as well.”

In terms of a potential Black Group overall winner, last year’s victor Caroline van Beelen and Rutger Krijger’s Dutch J/109 Jack Rabbit is back. Outside of the J/112Es Franks also identifies another J/109, Chris and Victoria Preston’s Jubilee, as being a strong contender, along with Adam Gosling’s extremely successful JPK10.80 Yes!