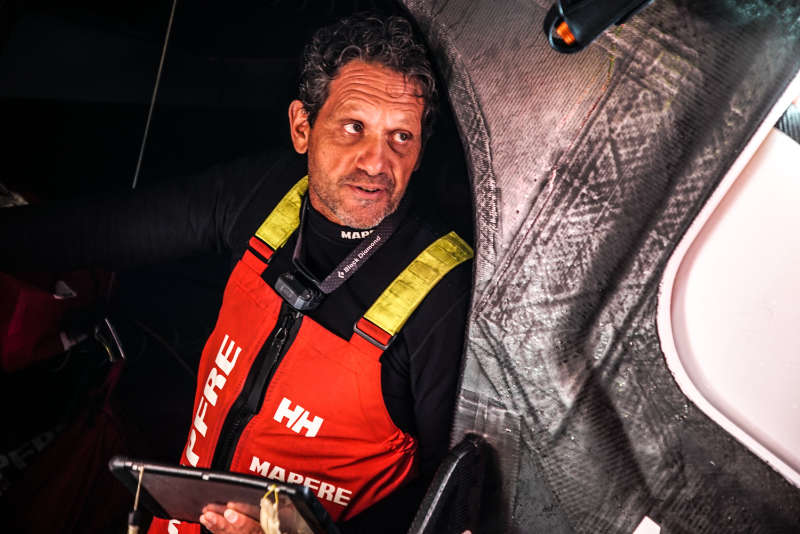 Classic Southern Ocean conditions from here to the Horn

Classic Southern Ocean conditions from here to the Horn

The sixth day of Leg 7 of the Volvo Ocean Race dawned with a reshuffle of the rankings as MAPFRE and Dongfeng Race Team shot to the front of the fleet.

The two feared red boats were rewarded for choosing the hard option of carrying out more gybes as the fleet skirts the Ice Exclusion Zone, deep in the Southern Ocean.

While Team AkzoNobel and Vestas 11th Hour Racing, the previous leading duo, gybed a handful of times in the last 24 hours, MAPFRE put in eight gybes as they looked to gain the maximum benefit from being the furthest south.

Gybing a Volvo Ocean 65 in strong breeze and big seas is no mean feat, and requires all members of the crew awake and on deck to carry out the extremely physical manoeuvre.

But similar to during Leg 3, MAPFRE leader Xabi Fernández and Dongfeng skipper Charles Caudrelier proved they are willing to push their crews to the absolute limit in pursuit of the top spot.

And it paid off, as MAPFRE emerged as the new leaders of Leg 7 with Dongfeng just under nine miles behind in the runner-up spot.

But the leaderboard should be looked at with caution, as the boats gybing north inevitably fall down the ranking before exchanging the advantage when they come back to an easterly heading.

Despite a welcome return to the front of the fleet, with two thirds of the 7,600-mile leg still remaining Fernández acknowledged as much and was keen not to put too much emphasis on their new-found position.

“Last night was quite tricky – it was windy and the front passed with a big shift,” he said. “I think we positioned ourselves pretty well, and we’re now the farthest south and east of the fleet.

“It’s nice to be at the front even though everything is super close. Let’s see how it plays out, and how everyone is positioned after tonight.”

Despite opting for more gybes than some of their rivals, the danger of the manoeuvre is not lost on Dongfeng’s crew.

“The worst conditions in the south – colder water, darker nights, windier and you’re a long way from anywhere if something goes wrong,” bowman Jack Bouttell explained.

“Everyone’s in a slightly different mind-set with the manoeuvres in the south because it’s that much more dangerous. Carrying them out is a balance between doing them quickly so you’re on deck as little time as possible but also taking greater care. You can get injured really quickly.”

Team AkzoNobel, meanwhile, were kicking themselves for having lost their lead after more than 1,000 miles in the top spot.

“Dongfeng went past the bow of our boat this morning, and unfortunately MAPFRE was with them too,” AkzoNobel’s boat captain Nicolai Sehested said. “Last night they were behind us and now they’ve crossed us, so it’s not been the best morning. However there’s still 15 more mornings to go though so it can change.”

Navigator Jules Salter added: “The shift to the south-west came, and we’re on the wrong side of it. We’ve now just got to sail the boat fast and try to close some distance up. We lost a lot in the last three hours, so it’s not been a very good 18 hours. We should have gybed with them once more but we let them go for probably an hour too long.”

Despite the new positions, the top six teams are practically neck and neck, split north to south by 20 miles.

The only team to have slipped slightly is Team Sun Hung Kai/Scallywag, who trail by around 90 miles, but with almost 5,000 miles – and the rounding of Cape Horn – still to go, the Leg 7 podium is far from confirmed.