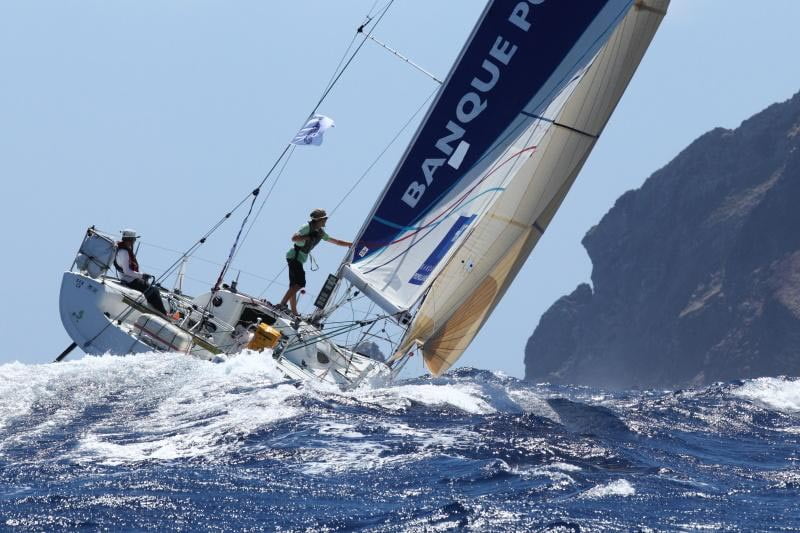 “That was not an easy victory,” admitted Ross Applebey: “At Saba we were last but one on the water. The crew dug in deep for the beat to St.Barths; we clawed our way through the fleet and got into a good position for the big reach to Guadeloupe. Scarlet Oyster is very well set up for reaching and we edged ahead. The whole IRC Two fleet was south of Guadeloupe together, so we were never comfortable, especially as Andy (Middleton) stayed with us all the way. I am never going to pretend Scarlet Oyster is a Maxi72, but we are proof that you can come to play on a charter boat and win at one of the world’s greatest offshore races. Scarlet Oyster has a regular core crew and I always tell new members to the team that the ‘600 is a tough race and we push hard.”

After a tremendous battle between Conor Fogerty’s Irish Sunfast 36, Bam and Susann Wrede’s German Swan 44, Best Buddies. Bam took line honours in an elapsed time of 3 days 11 hours 1 mins 7 secs. Bam also won the class win after IRC time correction by just over six minutes. The team on Bam are all Irish, bar Welshman Roger Smith and all live in Dublin. Bam crew member, Simon Knowles has competed in five Round Ireland Races and one Fastnet: “Conor and all the team were over the moon; we have never sailed together as a crew before, so to come here and win our class is brilliant. As the smallest boat racing in IRC and an amateur team, we knew it was going to be tough and the most important thing was just to keep going. Best Buddies kept reeling us in on the upwind legs and we were faster downwind. At Redonda we had a six mile lead but we knew they would be eroding that. It was very tense at the finish, especially as there was confusion about the location of the finish line. From a navigational point of view this is the toughest race I have done, but the race course is fabulous and you are always thinking about the next move. We celebrated when we finished, but we still have something in the tank for tonight’s prize giving.”

Grand Soleil 46, Belladonna finished the RORC Caribbean 600 yesterday after just over three days and nights at sea. The crew of 14 (including T-Bear a stuffed toy to avoid the unlucky number) are all RORC members, including skipper RORC Admiral, Andrew McIrvine, Commodore, Michael Boyd and three former Committee members.

“This is my seventh race and I have done it on lots of different boats. I started racing on a 46-foot boat and I seem to have gone back to a 46-foot boat,” laughed Admiral Andrew McIrvine dockside. It was a great race, but also the slowest time I have completed the course, so this time I got my money’s worth! We are a bunch of elderly gents, kept in tow by two super guys in Alex Gardner and Tim Thubron. Alex spent the last five hours of the race inside the transom, holding the rudder together. Last night we went around La Desirade in a lot of breeze and we had planned to hoist the jib top but Tim said that the angle was much more free so we put up the S4 spinnaker and we took off on big seas, fully loaded – fantastic! A lot of the course was upwind for us but the boys were great hiking out for many hours. They are a brilliant team but we did give up on cooking and survived on nuts and Peter Morton’s carrots!”

Antiguan entry Bernie Evan-Wong, racing RP37, Taz completed the race on the fourth day of racing having spent over three days and nights at sea. Bernie is the only skipper to have competed in all eight editions of the race. “I had an awesome crew for this race and it is the fastest that I have ever done, so that is just great. We pushed really hard, we blew out a few sails but I didn’t want the crew to say we didn’t really go for it. The most memorable moment for me was passing within a boat length of the 100ft Comanche at night; absolutely amazing. She was gone with a flash. I was very thankful that we had a night moon and that they saw us.”