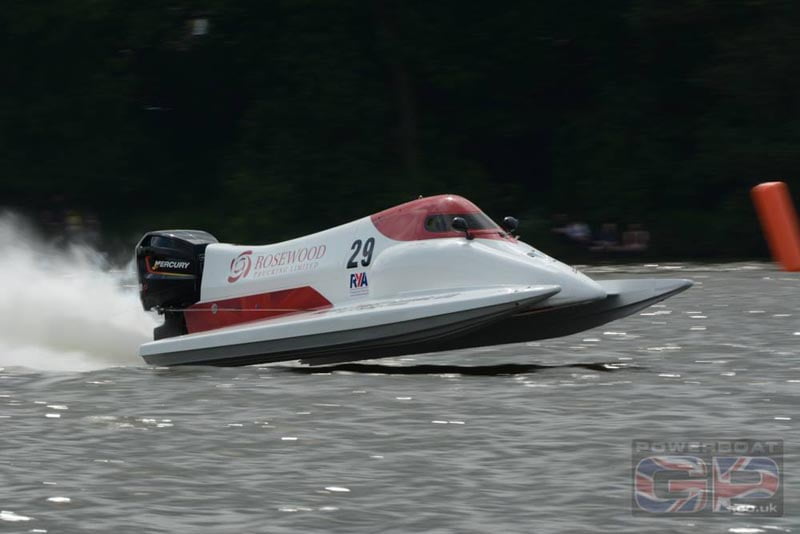 The 2016 RYA Powerboat GP Championship campaign headed to Chasewater Water Sports Park for the Chasewater Grand Prix last weekend (16/17 July) for the penultimate weekend in the British Championship. Four of the championship classes made the journey to the Staffordshire country park to battle it out for vital points in the championship as scores of spectators looked on.

First up were the junior racers who took to the water to battle for pole position the 9-16 year olds battled it out with Jonathan Brewer taking Pole position. As the lights went out for the first heat all eyes were on the first turn mark to see who would make it first round the turn. As the spray settled it was championship leader Thomas Mantripp who had started from the back of the grid that led the way. Brewer followed in second with Harvey Smith and George Elmore battling it out for third. With clean water Mantripp remained cool and calm and raced his way home to the first heat win of the weekend.

Back on Pole position Thomas once more led the way through heats two and three to claim the Powerboat GP Chasewater Grand Prix crown and all important championship points. Jonathan Brewer took three out of three silver medal places to secure himself the second place on the podium with Harvey Smith holding George Elmore at bay to take the bronze medal.

In the GT30 Class local girl racer Tiegen Goodfellow was set to make another challenge against championship leader Ben Jelf. The youngster was poised and ready to race and as qualification times came in just half a second separated her from Jelf who’d claimed pole but putting on even more pressure Jack Pickles was hot on Tiegen’s wake giving her no room for error.

Heat 1 got underway and once more it was Ben Jelf that led the way to the first turn mark, however pushing him every inch of the course the girl racer was ready to capitalise on any error from Jelf. Jelf took the heat win with Goodfellow in second and putting in a strong performance Jack Pickles secured the third place in the first heat.

As the boats lined up for heat 2 disaster struck for Pickles as his engine didn’t fire and he was left on the dock as the boats hurtled towards the first turn. A second attempt at starting was made and this time he got-going and the youngster set about chasing down the leading pack. He made quick work of passing back markers Tony Judge and Nigel Edwards and sethis eyes on another third place finish bearing down on Thomas Mantripp waiting for the opportunity to pass the youngster into the third spot.