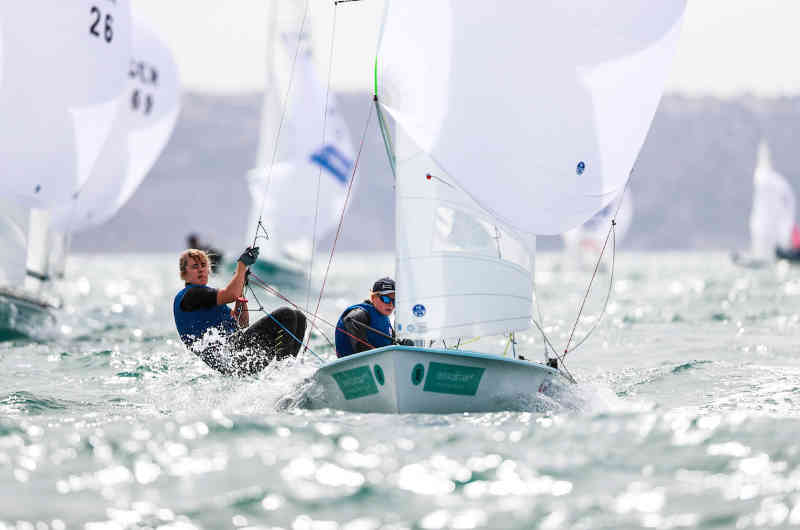 Britain’s sailors notched up five race wins on a tough opening day of the Princess Sofia Trophy in Palma, Spain, to go into day two with crews in the top five in six classes.

Fickle, light winds provided testing conditions as a bumper contingent of more than 50 British Sailing Team athletes hit the water for the first day of the iconic week-long regatta.

This year’s Princess Sofia Trophy is the largest in its 50-year history with more than 1,200 sailors and 870 boats from 60 nations competing across the ten Olympic classes.

The fleets are so large that many have been split into two and some, like the 49er, Laser Standard and men’s RS:X, into three to ensure fair racing.

Beijing 2008 bronze medallist Bryony Shaw kicked off the scoring with a win in the second women’s RS:X race, while promising Laser sailor Lorenzo Chiavarini opened his scorecard with success in the class opener.

Saxton, the current world champion, teamed up with Boniface for the regatta after regular crew Katie Dabson was injured in training.

Despite the last-minute change, the duo finished on the podium in all three races to end the day in third overall.

“I was ecstatic just to be on the water today after Katie was injured two days ago, and I’m really grateful to everyone who’s helped out,” Saxton said.

“We did the simple things well and ended up having an unbelievably good day given the circumstances. It was the perfect start to the regatta. We’re not getting too excited just yet but it’s a great confidence boost.”

In the 91-boat 49er FX class, Charlotte Dobson and Saskia Tidey laid down a marker by finishing second in the opening two races to finish the day in fourth overall.

“We got a great start in the first race and managed to hold it round the track, and in the second we recovered from a dodgy start to come back through the fleet,” Tidey said.

“We dropped off a bit in the third race – the sea state was messy and we didn’t manage the transitions into the lulls very well. We’ve got a bit of work to do tonight in case we get similar tomorrow. All in all we had two good results and one to learn from.

“We just have to keep our eyes on the prize – it’s a long week and we’ll be aiming to keep our results low when we go out tomorrow.”

Consistent results from Jess Lavery and Flora Stewart see them finish the day in fifth in the women’s 470, while Chiavarini occupies the top spot in the Laser fleet.