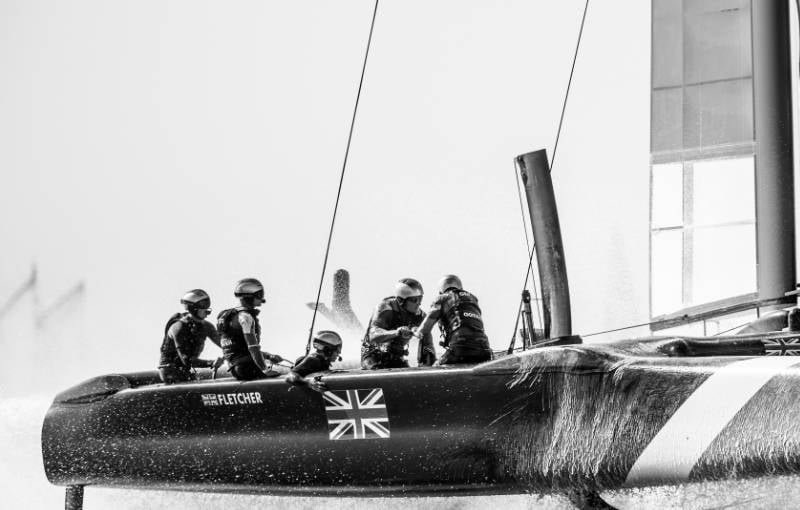 It was all on for today. The final two fleet races to decide the third place podium following by the climax to the season-long rivalry between Australia and Japan for the $1m prizemoney and the title of SailGP Season 1 Champion. The British team were ready for the battle and went into the day on equal points with the Chinese – it promised to be intense with both of these two teams in the running to claim that final podium place.

But it was not to be for Dylan Fletcher and his British team – the wind was super light and the Brits had a disastrous first race getting caught out by a wind hole at the start and, despite closing the gap, they finished in 4th place. Much to the joy of the home fans, the French team took their first race win this season and the Chinese finished in 2nd position. Following a short postponement and the wind dying out, luck was not on the side of the British athletes today and the final fleet race had to be cancelled – Team China took 3rd place overall with 171 points and Great Britain SailGP finished up their first season in a very credible 4th place on 169 points.

“It has been such a challenging year for our team and I am super proud despite today’s result. We are naturally gutted not to have secured the 3rd place podium that was within our grasp but I have loved every minute of the SailGP championship and we have grown so much as a team. It’s a shame that we cannot keep racing and that we have to wait until February 2020 to compete again in Sydney but we are going to use the time to train and prepare so we ready to join the top table for SailGP season two.” commented Dylan Fletcher, British team skipper.

All eyes now turn to 2020 and planning for the second SailGP season which will start in Sydney, Australia on 28/29 February 2020. The team have an action packed calendar already set out for the winter months, focusing on training, fitness, team building and simulator sessions alongside the commercial objective of securing partners for season 2.

“We set out at the start of this year with the objective of being competitive by the final event and I feel happy that we have shown that we can race at the front of the fleet”, added Chris Draper, team CEO and wing trimmer, “I’m so proud of the whole team, everyone has worked so hard – today was super disappointing but we will learn and rise above that. We have had some big wins this season but also, as expected for such a new team, some disappointments too. But we will not stop learning, questioning, evolving, improving. Our apprenticeship ends now and the next level will kick in for season 2.”

The final match race was incredibly close between Australia and Japan, with the Japanese winning the start and initially in control. Tom Spithill and his Australian team kept the pressure on and managed to overhaul Nathan and the Japanese sailors to take a closely fought win and become the SailGP Season 1 Champion and claim the  $1m prizemoney.