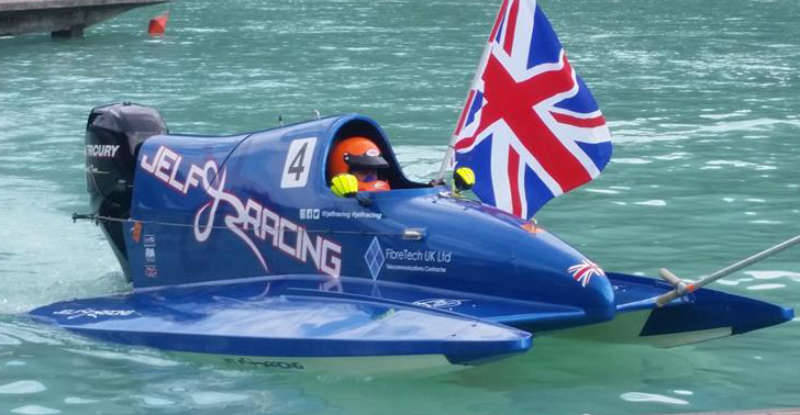 Following a strong performance in the 2017 F4 European championships that saw Ben claim a bronze medal, Ben will be aiming for the gold medal podium spot this weekend.

At the opening event of the World Championships in Barcis, Italy last month Ben faced some formidable competition amongst the world class fleet but remaining focussed and determined saw him win the second round of the championship in a flawless performance. Following some bad luck in the opening round that saw him entangled with a turn buoy and forced out of the race.

Ben will be feeling confident heading into the weekend and with a wealth of knowledge and support around him in his team he will be looking to reward the team and sponsors with another European title.

The competition itself will see Ben compete for pole position during a timed session and then over four heats with the best three results to count to fight for the European crown. But he will have a big fight on his hands if he’s to return victorious. Some of his strongest competition will come in the form of Latvian Racer Nikita Lijcs a formidable racer in his own right Lijcs will be hoping that Latvian luck on home water will be on his side. Reigning European champion Frenchman Rudy Revert will also be there defending his title and will certainly make it hard for the young British hopeful in his campaign.

Talking about his upcoming battle the British hopeful had this to say “Firstly I’d like to thank my family, team and sponsors for their support that gives me the opportunity to be in the position to fight for the European crown. Without everyone’s support it just wouldn’t be possible.”

Ben continues “The opening event of the World championship showed the calibre of opponent I’m going to have to beat to make this dream come true, I know I’ve got a real fight on my hands this weekend there were several of us fighting for positions in Italy and Quentin Dailly and Tuukka Lehtonen put some real pressure on me so it’s going to be tough but I am going into the weekend relatively confident because of the support and dedication from Mum, Dad and all my team have put into getting me there. We’ve put in the hard work and hopefully I can bring my ‘A’ game and we can all reap the rewards.”