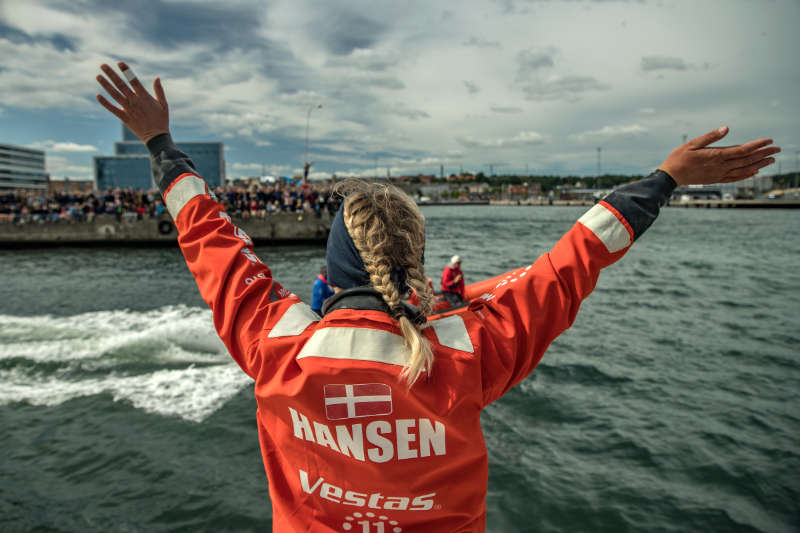 Aarhus confirmed as Host City for The Ocean Race 2021-22

Aarhus confirmed as Host City for The Ocean Race 2021-22

The Ocean Race will come to Aarhus, Denmark during the spring of 2022, following a popular ‘Fly-By’ of the city during the final leg of the 2017-18 edition of the Race.

The success of the Fly-By, where the fleet raced into the inner harbour of Aarhus port and around a turning mark in front of tens of thousands of fans, cemented the popularity of The Ocean Race in Denmark and made Aarhus a natural choice as the first ever Danish Host City for the next race.

Richard Brisius and Johan Salén, co-owners of The Ocean Race, see long-term opportunities for all stakeholders with the selection of Aarhus as a Host City.

“The Ocean Race has long had significant ties to Denmark, with sailors, race and team partners and sponsors and of course, the successful Fly-By in the last race,” said Richard Brisius. “We now have an opportunity to strengthen those bonds even further going forward. The passion of the people of Aarhus, combined with the city’s experience of organising international events, will create the perfect atmosphere for the best sailors in the world.

“Aarhus is a modern, innovative city, with strong historical ties to the ocean and to sailing – as we saw when this same facility hosted the Sailing World Championships last year. Through the talent of great young sailors like Nicolai Sehested and Jena Mai Hansen, who competed in the last edition of the Race, plus veterans such as Jens Dolmer and Stig Westergaard, Denmark has long played an important role in the Race.”

“As the partnership with The Ocean Race demonstrates beyond a shadow of a doubt, Aarhus has achieved an absolutely unique position as a world-class arena for international sailing events,” said Jacob Bundsgaard, the Mayor of Aarhus. “When The Ocean Race docks in Aarhus in 2022, we can look forward to an epic sporting event for maritime Denmark and a fantastic celebration on the waterfront in Aarhus for everyone.”

The Mayor of Sports, Culture and Citizens’ Services, Rabih Azad-Ahmad, said: “It is absolutely amazing that The Ocean Race is coming to Aarhus. It is an event that is followed worldwide and is a great opportunity to showcase our beautiful city and bay. I am sure that The Ocean Race in Aarhus will set the stage for a huge maritime celebration with exciting experiences for the city’s citizens and guests. We will use the opportunity to focus on sustainability and increase awareness of this important matter.”

Lars Lundov, CEO of Sport Event Denmark, the national sporting event organisation that partners with major events across Denmark, added: “Aarhus has marked itself as Denmark’s leading Host City for major international sailing events. Last summer, the very successful World Sailing Championships for all Olympic classes were held here, and now we look forward to The Ocean Race in 2021-22, where we will continue to focus on sustainability.”

For The Ocean Race, sustainability has long been a core value and has become an even bigger focus for the event looking forward. In 2017-18, the Race helped to spark a global movement against plastic waste, and a comprehensive sustainability initiative aims to educate and inspire millions around the world to make positive changes.

“In the last edition of the Race, our groundbreaking and award-winning Sustainability Programme set new standards for how a sporting event can engage its fans and stakeholders in attacking the problem of plastic pollution and restoring ocean health,” said The Ocean Race’s Johan Salén.

“I believe that by working in partnership with our Host Cities like Aarhus, as well as all of our stakeholders, we will be able to raise the bar even higher to ensure that our sport retains a leadership role in this critical area.”

Aarhus joins the Start Port of Alicante, Spain as confirmed Host Cities of The Ocean Race 2021-22, with more announcements expected in the coming weeks.