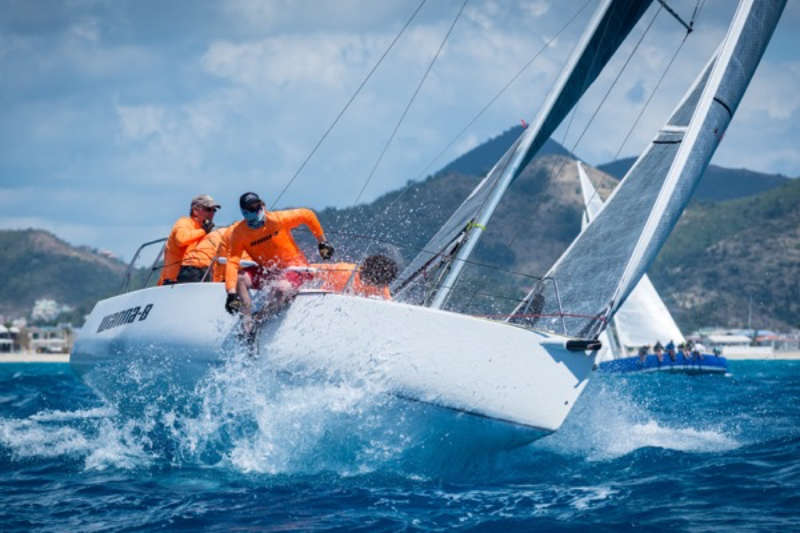 A burst of breeze from the west made for a spectacular grand finale of racing at the 38th St. Maarten Heineken Regatta, and with lead positions still up for grabs in several classes, many teams were eager to make their final claims on class victories. To capitalize on the 18-knot breeze, organizers sent Maxi and Ocean Racing Classes on a counter clockwise race around the island while the rest of the CSA, Ocean Racing, Bareboat and Melges 24 fleet dazzled spectators from the shore off Simpson Bay, racing a series of windward leeward courses. In the end, winners were crowned in 16 classes.

“We won this trophy in 1999, and it feels wonderful to do it again,” said van den Eynde who has raced in the Heineken Regatta since its inception in 1980 and lost his previous boat to Hurricane Irma. He returned this year with a new boat, Esse 850 Wanna B. “It moves surprisingly well and this was only the fourth time we had sailed it.”

The J/122 El Ocaso was also down in the Caribbean during the hurricane, but the boat made it through and went on to take the overall win here in the competitive CSA 3 Class. “We had a really tough class, so for us to be on top today means a lot,” said Bob Hillier who raced onboard with owner Chris Body. “There was no one dominant boat in the fleet, and taking the overall win came down to the last race.”

After fighting tooth and nail in the Maxi Class, Kialoa III was able to pull ahead of the Brazilian team Camiranga to take first place overall. “We had a great race going counter clockwise around the island, which was something I hadn’t seen before,” said Navigator Skipper Stephen Stewart. “It was good to do it in such a fast time. It’s nice to see.”

The Polish team racing the Volvo Ocean 70 Green Dragon and Chris Swallow’s team aboard the Pogo 12.50 Akouavi were able to hold on to their leads in the event’s two Ocean Racing Classes. “This was the first time in history for our club that we won both the Gill Commodore’s Cup and the Heineken Regatta,” said Green Dragon’s Przemyslaw Tarnacki who has been racing with his team at the event for six years now. “We are already looking forward to returning again next year.”

And after some serious racing, came some “Serious Fun” and competitors went from the docks to the Regatta Village to join friends and locals for libations, final prize giving and a performance from Grammy Award winning musician Shaggy.

38 years strong and it just keeps getting better. Four days of world-class racing with some of the world’s most seasoned sailors, from more than 35 countries, sailing Maxis, Monohulls and Performance Multihulls to holiday-makers on chartered Bareboats and live-aboard families cruising the Caribbean. Crystal clear waters and cooling northeast trade winds give the pristine conditions for spectacular racing just off the coast of St. Maarten. And with Heineken as title sponsor, the racing days blend seamlessly into four nights of exceptional parties. This event is your bucket list must-do! Come and enjoy life in the Caribbean, come for some Serious Fun from March 1-4, 2018!

For up-to-date information regarding lodging, marinas, charter options and beyond, visit http://heinekenregatta.com/