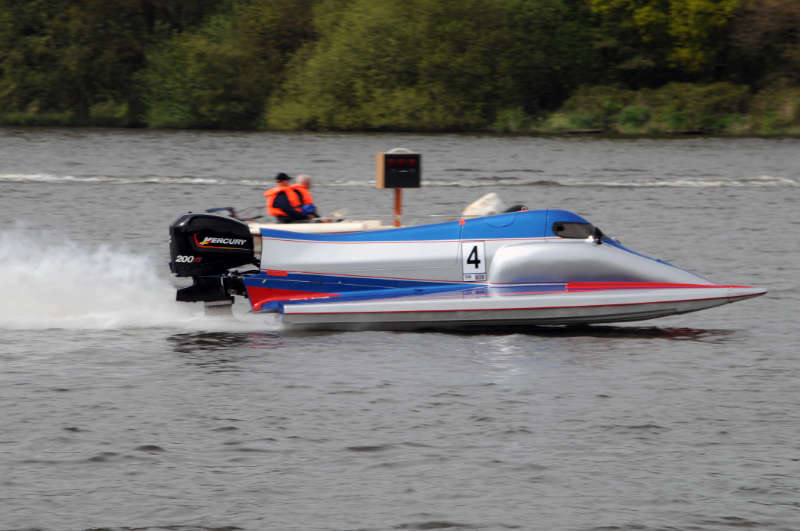 Competitors from all over the UK descended on Carr Mill Dam, St Helens this weekend (29/30 April) for the opening round of the 2017 Powerboat GP Championship the Lancashire Grand Prix. Six championship classes were in action throughout the weekend bringing fast and furious action to the dam.

First up in action were the junior racers in the GT15 class and the crown was there for the claiming. A promising fleet of young racers all looking to lay claim to the Lancashire Grand Prix crown The first youngster to throw down the gauntlet was Lancashire’s very own Harvey Smith claiming pole position with 3 seconds to spare on the rest of the fleet.

From his pole position in heat 1 Smith put in a commanding performance leading the junior racers with every twist and turn of the course to claim the first victory of the season. Youngster Aidan Fleet led the following pack to take second with rookie racer Caleb Jelf securing third. Following engine problems during qualifying and heat 1 George Elmore opted to change his engine forfeiting his heat 1 points.

As heat 2 dawned Smith took his place in pole position whilst Elmore joined the fleet at the back of the grid. As the lights went out the junior racers powered away from the start pontoon with both Smith and Elmore getting fantastic starts from their respective ends of the grid. As they rounded the first buoy Smith once more led the pack, followed by Aidan Fleet and Elmore sat in third as the rounded the course Elmore moved up to second and began bearing down on Smith and by the end of 1st lap he saw his chance and slipped passed Harvey. They battled for the rest of the race with Harvey trying to catch George but out in front the youngster kept his head and claimed his first national chequered flag finish.

Heat 3 saw Elmore determined not to lose his pole position putting in a storming performance and despite a strong challenge from Smith, Elmore held his lead from start to finish to secure the chequered flag once more. Following some fantastic racing from the junior racers Harvey Smith laid claim to the Lancashire Grand Prix GT15 crown in his first National Championship win. Stewartby’s Aidan Fleet secured his first podium finish securing silver and at his first National outing Caleb Jelf claimed the bronze medal position. Ethan Goodfellow and rookie Jessica Haylock both put in commanding performances meaning this championship campaign could get very exciting as the season progresses.

The next championship crown in contention was the GT30 class the seasoned racers were joined by three rookie racers all looking to make their impact on the championship in the form of Ralph White, Jayme Speller and Andy Cousins. Lowestoft’s Thomas Mantripp straight away showed the rest of the class that he was determined to secure the 2017 Lancashire crown.  The battle was on and it was going to be a fierce one adding Lady Racer Tiegen Goodfellow, Jonathan Brewer and Jack Pickles into the mix the GT30 campaign is going to be edge of the seat action all season.

As the lights went out for heat 1 Jonathan Brewer powered off the line heading into the first turn he had 3 boat lengths on Thomas Mantripp who was battling hard with Jack Pickles in third. Jonathan continued to lead the race with a strong lead despite the determination from Mantripp to catch him. But a lapse in concentration from young Brewer saw him miss a turn buoy.

Heat 2 saw Brewer and Mantripp go head to head once more but a collision between the two rounding the first turn saw Tiegen Goodfellow capitalise on their mistake as she sailed past them with Jack Pickles hot on her wake and Tony Judge also moving past the two racers as they untangled themselves from each other. Out in the lead the plucky young female racer was not going to give up her lead to anyone.  Boat damage forced Brewer to retire from the weekends racing.

Heat 3 saw Thomas Mantripp once more claim the lead and despite a strong challenge from Jack Pickles who finished in three strong second places saw the youngster from Bolton claim the silver medal and his best national championship finish in his racing career. Tiegen Goodfellow completed the podium line up claiming bronze and leaving her in a strong position for the rest of the season.

Making a welcome come back to Carr Mill Dam after an absence of a few years were the OSY400 Hydroplanes, four drivers made the journey from Oulton Broad to compete and see who would take the lead in the 2017 championship. Former British Champion Jamie Marr got a disastrous start to the season as he caught a gust of wind sending him crashing out in qualification and left his team lots of work to do before the first heat. Reigning champion Jason Mantripp claimed pole position returning to his winning ways from last season.

Marr made the first heat and as the lights went out the boats powered away towards the first turn as their spray settled Mantripp had taken the lead. Marr and Moyse were hot in his wake and Marr was looking for any opportunity to pass the reigning champ or any mistake he might make. Mantripp secured the win in a flawless race leaving Marr to settle for second and Wayne Moyse to cruise home in third ahead of Brad Holman.

Heat two saw a repeat performance of Mantripp take an early lead skimming across the water ahead the rest of the fleet. Marr tried everything to catch him but Mantripp kept his head to take the second win of the season. Heat 3 and all pressure was on Moyse, Holman and Jamie Marr were determined not to let Mantripp take a clean sweep of wins and battled hard to make sure it didn’t happen. Third time lucky and Marr stole the win despite every effort to Mantripp to claim the 3rd heat win with Moyse once more taking third and Holman forced to settle for 4th place. The podium was complete as Jason Mantripp   lifted the Lancashire Grand Prix OSY400 crown with Jamie Marr securing silver and Wayne Moyse completing the podium.

Mark Williams made a comeback in the T850 Monohull class determined on making sure Lancashire’s Bill Owen couldn’t run away with the championship on his way to his 10th British Championship title. It wasn’t long before Williams made his intentions clear and Bill

Owen, Steve Cash, Nigel Edwards and Jason Brewer soon found out the hard way that it would take a lot of hard work and determination to stop Williams who put in a flawless performance throughout the event.

Williams secured pole position in qualification a clear 3 seconds faster than the rest of the fleet and ahead of Bill Owen and the chasing fleet. Heat 1 saw a blistering start from Mark Williams and the fleet headed into the first turn. Williams soon started to pull away from chasing pack and despite all his best efforts Bill Owen just could not catch him. Steve Cash, Nigel Edwards and Jason Brewer all battled hard third with Steve Cash just getting the jump on Nigel Edwards.

Heat 2 Williams and Owen went into the first turn together and all eyes watched from the bank to see who would come out in the lead. Williams remained dominant throughout heat two and three claiming the Lancashire Grand Prix T850 crown. Bill Owen sailed home in the Silver medal podium spot and Steve Cash completed the line up taking the Bronze, with Nigel Edwards retiring after heat two with engine problems.

Next up was a strong fleet of F4 drivers with former champion Ben Morse making a strong comeback following his Bronze European finish in 2016. New driver Martin Wood and John Donnelly joined the F4 fleet and Mick Pillow and Ray Read made a comeback to the class. Former Champion Ben Morse used his experience and knowledge of the class and his home water to secure pole position over a second quicker than hot shot Rob Veares and with Ben Jelf a tenth of a second behind him.

Heat 1 saw Ben Morse getting off to a blistering start and Rob Veares and Ben Jelf spent the 8 lap race chasing him down trying to claw back a well-established lead. Meanwhile Martin Wood and Leon King battled it out for 4th place.

Heat 2 saw Veares getting a flying start and take an early lead ahead of Ben Morse and Jelf who were fighting hard to catch him. Veares managed to hold Morse at bay for a couple of laps but heading down in the straight Morse saw his opportunity to manoeuvre around him and back into the lead.

Heat 3 saw Veares once more get the jump on Ben Morse and again they went into a head to head battle to claim first position. Again Jelf sat in a strong third place trying his upmost to catch the leading two and was gaining every turn of the course, but once more Morse took the win making it a clean sweep for the returning former champion. So on home water on his big comeback local lad Ben Morse clinched three heat wins to crown him Lancashire Grand Prix F4 Champion, Rob Veares claimed silver with Ben Jelf completed the podium by taking bronze.

The final battle of the weekend was set to be the biggest battle of the weekend as five F2 catamarans lined up to do battle with 3 former British Champions hoping to steal the show for the first Grand Prix win. Reigning Champion Paul Balfour was high in confidence with the campaign starting on his home course where he’s spent years practising his lines in and out of the turns. But with the experience of all the drivers in the fleet nothing was going to be easy for any of the drivers.

Colin Jelf claimed pole position a second quicker than reigning champion Paul Balfour. The battle was on and as the boats lined up tensions were high. Bank Holiday crowds lined the banks of Carr Mill and as the lights went out the catamarans thundered into life. All are eyes were on the fairground turn to see which racer had the edge. As the spray settled and the boats rounded the corner Colin Jelf was out in front with Steve Hoult and Paul Balfour chasing hard behind him.

Heat 2 was a repeat performance from the former World Champion Colin Jelf as he used his pole position to full advantage leading from start to finish despite the best efforts of Balfour who battled hard with Matt Palfreyman for second place whilst Steve Hoult had mechanical issues forcing him into 4th.

The third and final heat of the weekend proved Jelf was back to winning ways as once more he stormed ahead driving his F2 catamaran with precision to take 3 clean wins of the weekend and securing himself the Lancashire Grand Prix F2 Crown and the championship lead. The Podium was completed with a Silver medal for Paul Balfour and Steve Hoult secured the bronze.

Luke Jones Powerboat GP promoter had this to say on a fantastic weekends racing “What a way to kick off the 2017 championship. We’ve had an influx of new racers, some returning old friends and strong performances from all our racers.”

He continued “We aim to produce close exciting and safe racing for both competitors and spectators alike and this weekend certainly ticked all the boxes. There was a great standard of racing out there that was fantastic to watch. The season is well and truly underway and now we can’t wait for the next event. To Lancashire Powerboat Racing Club, Officials and safety crew thank you for making the vent such a success and we can’t wait to see the action unfold in Lowestoft.”