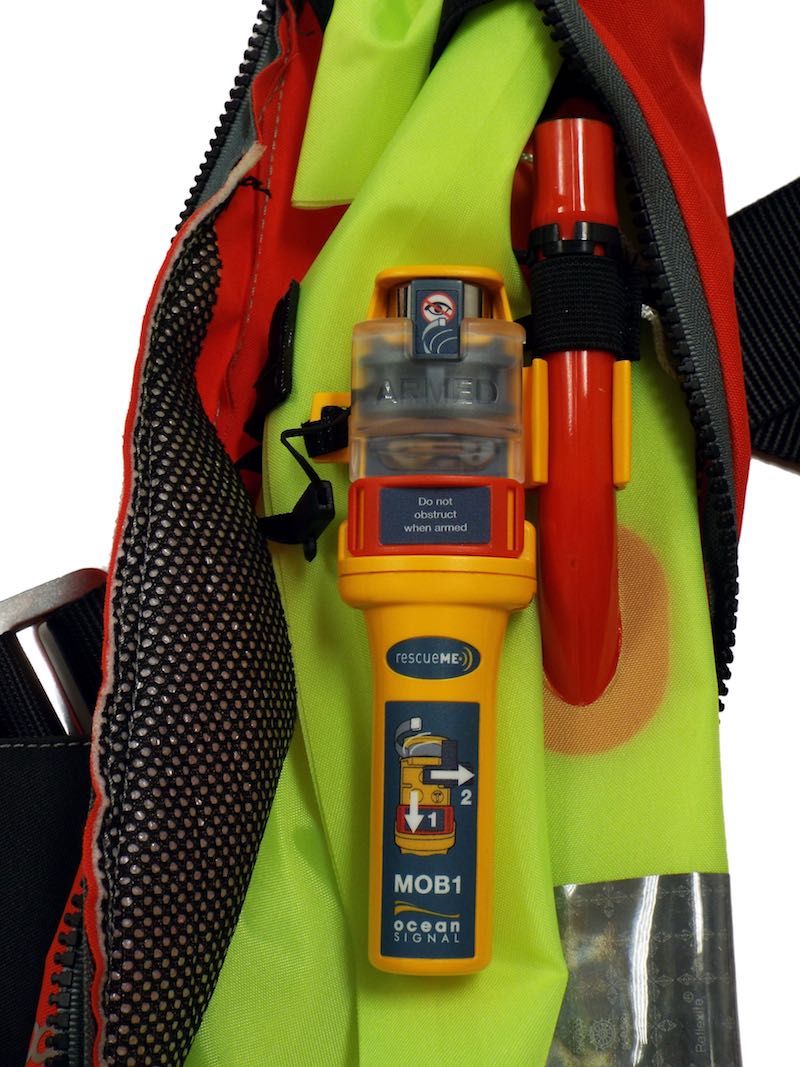 Ocean Safety and Ocean Signal have joined forces to supply the award-winning Ocean Signal rescueME MOB1 AIS man overboard device to all the crews taking part in the Clipper 2017-18 Round the World Yacht Race as part of a new level of safety standards that have been set by the organisers.  The compact MOB1 will be integrated into Ocean Safety’s specialised Kru lifejackets that are supplied to crewmembers following the introduction of measures that mean all competitors will carry an Automatic Identification System (AIS) device for the first time.

Ocean Safety, a 3Si group company, is an Official Supplier to the Clipper 2017-18 Race and will supply the rescueME MOB1s on behalf of Ocean Signal to integrate into the Kru lifejackets.

In the event of a person falling into the sea, the rescueME MOB1 is automatically triggered the moment the life jacket is inflated, sending the first alert within 15 seconds. It then provides two methods of communicating the location of a person in the water back to the boat and other nearby vessels, plus visual indication. The device transmits an alert to all AIS receivers and AIS-enabled plotters in the vicinity, with the integrated 66-channel GPS ensuring accurate position data is sent back to the boat and any other assisting vessels for at least 24 hours. Secondly, the MOB1 will activate the DSC alarm on the vessel’s VHF radio to alert fellow crew members. The integrated strobe light with moulded lens ensures the survivor is easily spotted in poor light conditions.

Ocean Safety’s addition of the life-saving Ocean Signal device to the standard safety equipment on board each of the 70ft yachts reflects the wishes of the organisers to offer the highest safety standards to their crew.

James Hewitt, Ocean Signal’s Sales and Marketing Manager, said: “All ocean racing can be extremely dangerous, even for the most experienced crew, so we are delighted to provide the crew in the Clipper Race with a reliable life-saving device which will provide reassurance that they can be located quickly and recovered if they fall overboard.

“In a man overboard situation, your first and best chance of rescue will always be from the vessel from which you have become separated. The immediate priority is to ensure that your fellow crew members are aware of the emergency and to do everything possible to make sure they have sight of you or know where you are relative to the vessel. The rescueME MOB1 is very small and unobtrusive, and, significantly, it features the additional DSC alarm, as well as the AIS alert.”

Alistair Hackett, General Manager at Ocean Safety, comments “Ocean Safety has a long standing partnership with Ocean Signal and the Clipper Race and so for both the suppliers to join together to provide the Clipper Race with a key next step in safety solutions is a natural outcome.”  In fact Ocean Safety, a 3Si Group company is returning as safety supplier for an impressive sixth consecutive race.

Held biennially, the 11th edition of the Clipper Round the World Yacht Race gets underway in August 2017 for the fleet of twelve identical Tony Castro designed Clipper 70s. Each team is led by a professional skipper with an all-amateur crew, who undertake four pioneering levels of training before taking part in the race. The  overall race route spans 40,000 nm  and is divided into a series of global races with the team having the best cumulative score winning the coveted Clipper Race Trophy.