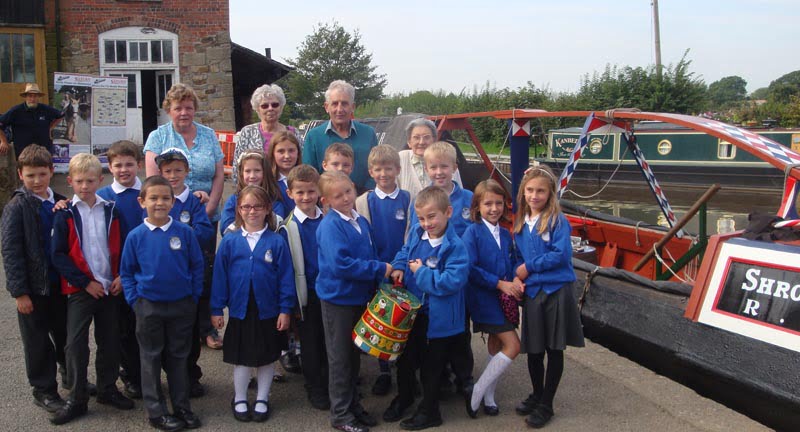 A new trail created for children at the Canal & River Trust’s Ellesmere canal repair yard in Shropshire will help them travel back in time and find out what it was like when the yard was opened over 200 years ago.

The trail has been developed thanks to a donation from Trimpley Court, a nearby retirement housing scheme, whose residents have taken a keen interest in the development of the Ellesmere canal yard and so nominated the Trust as their charity of the year.

Children from Ellesmere Primary School explored the trail in advance of the repair yard being opened to the public as part of the annual Ellesmere Festival and national Heritage Open Days and met some of the residents whose donation had turned the trail into reality.

Canal & River Trust education coordinator Katie Hutchinson, said: “The new trail is an exciting way to help children imagine what the Ellesmere canal repair yard would have been like in its heyday and we are grateful for the residents of Trimpley Court for their donation of £160 to enable this to happen. The residents have been involved in the consultation about ideas for future activities at the yard and making a donation was their way of helping in a practical way.”

The Ellesmere yard on the Llangollen Canal is located on Birch Road on the edge of the town of Ellesmere and is a well preserved example of a canal maintenance yard dating back to the early 1800s.

The yard was opened to the public as part of the national Heritage Open Days weekend (11 – 13 September) and visitors were able to see inside some of the grade II* listed buildings, including the smithy, where resident blacksmith Rowan Taylor gave demonstrations using traditional techniques.

The site has kept its historic links and is still in use today as the operating base for the Canal & River Trust’s team who look after the Llangollen and Montgomery Canals.

Visitors were also able to see Saturn, the restored horse-drawn Shropshire Union fly-boat, built more than 100 years ago to travel non-stop, day and night, carrying perishable goods along the canal.