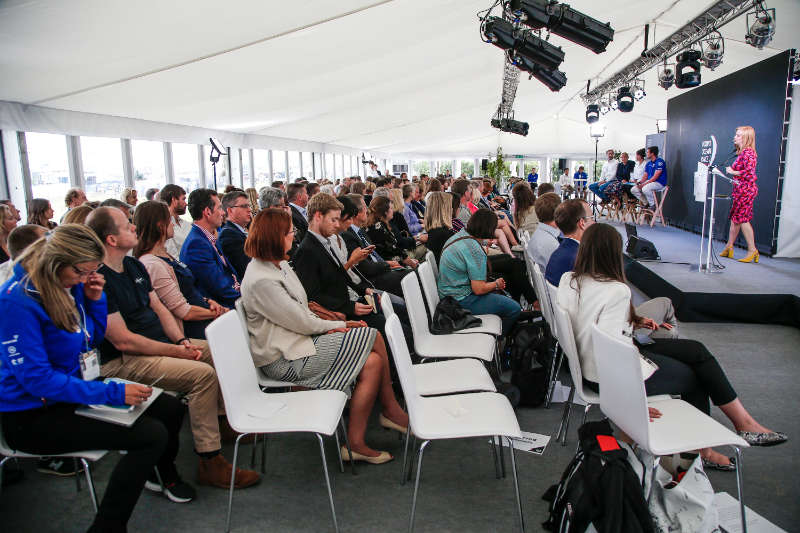 Volvo Ocean Race – A platform for innovation and change

Volvo Ocean Race – A platform for innovation and change

A platform for innovation and change – The Ocean Summit, during the Cardiff stopover, has seen a range of announcements that provide further momentum in the fight against plastic pollution.

Following a video address from Prince Charles, announcements from the Welsh Government, Iceland Foods and new microplastics data from the Volvo Ocean Race Science Programme all helped advance the growing movement to turn the tide on plastic.

At the event, in the Cardiff Race Village, the Welsh Government signed the country up to the United Nations Environment’s #CleanSeas campaign alongside World Sailing and the International Olympic Committee.

The Welsh Government also said that drinking water would be made available along the 870-mile Wales Coast path to help reduce the use of single use plastics.

Iceland Foods Group revealed the extension of their in-store trial of a Deposit Return Scheme. The reverse vending machines accept Iceland’s empty plastic beverage bottles and repay customers with a 10p voucher for each recycled bottle, to be used in store.

Meanwhile, Sky Director Robert Tansey, gave a keynote speech on the impact of the Sky Ocean Rescue campaign on the use of single-use plastic and the organisation’s efforts to remove them from their supply chain.

He said: “We’re very proud of what Sky has achieved but there’s much left to do. Awareness is no longer the issue. We now need to move into action.”

And the Volvo Ocean Race Science Programme unveiled microplastics data from Leg 8 of the Race from Itajaí in Brazil to Newport, USA.

“As an advocacy platform, they are moving this pressing issue up the global agenda, whilst at the same time, increasing public awareness. However, to solve the problem, we must maintain this momentum in order to deliver decisive action that creates long-term solutions.”

Presentations and discussions focussed on our understanding of plastic pollution and innovative solutions to it, the role of NGOs and how sport is providing a blueprint for a sustainable future. The event heard from Fredéric Michel about the importance of innovation in the field and Sky Ocean Ventures, a £25m innovation fund committed to investing in new ideas and businesses who can help solve the oceans plastic crisis.

Sky News presenter Sarah-Jane Mee was the master of ceremonies for the half-day event.

Hannah Blythyn, Welsh Minister for Environment, said: “2018 is Wales’ Year of the Sea and it’s great to be able to sign up to the Clean Seas campaign, which is an important initiative to tackle the issue of plastic litter in our seas.”

To date, Ocean Summits in Alicante, Cape Town, Hong Kong and Newport, Rhode Island, have already resulted in governments, business and a range of ocean advocates leading by example by making solid commitments to help stop the ubiquitous spread of plastic in our seas.

Anders Jacobson, President of Bluewater, said: “Clearly Britons are deeply concerned about the quality of their tap water and worry it’s contaminated by bacteria and micro-plastics. So, they’re turning to bottled water as a precaution, which is the wrong solution because it creates a huge waste stream of plastic waste that further pollutes our water.”